PROGRAMMABLE LOGIC ARRAY: There are a wide variety of ICs that can have their logic function “programmed” into them after they are manufactured. Most of these devices use technology that also allows the function to be reprogrammed, which means that if you find a bug in your design. PROGRAMMABLE ARRAY LOGIC The PAL is a programmable logic device with a fixed OR array and a programmable AND array. Because only the AND gates are programmable, the PAL is easier to program than but is not as flexible as the PLA.

There are a wide variety of ICs that can have their logic function  “programmed” into them after they are manufactured. Most of these devices use technology that also allows the function to be reprogrammed, which means that if you find a bug in your design.

Programmable logic arrays (PLAs) were the first programmable logic devices. PLAs contained a two-level structure of AND and OR gates with user-programmable connections. Using this structure, a designer could accommodate any logic function up to a certain level of complexity using the well-known theory of logic synthesis and minimization

The PLA is similar in concept to the PROM, except that the PLA does not provide full decoding of the variables and does not generate all the minterms. The decoder is replaced by an array of AND gates that can be programmed to generate any product term of the input variables. The product terms are then connected to OR gates to provide the sum of products for the required Boolean functions. The output is inverted when the XOR input is connected to 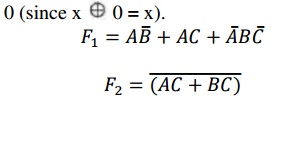 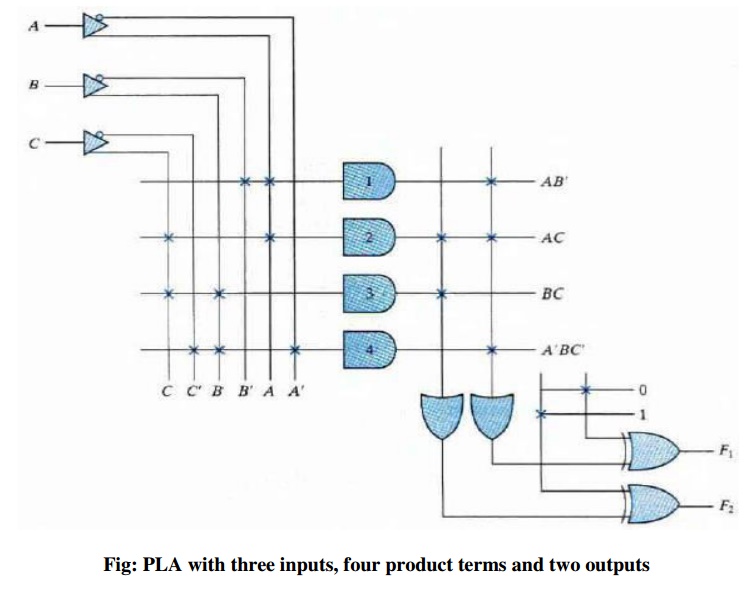 There are four sections in the unit each composed of an AND-OR array that is three wide, the term used to indicate that there are three programmable AND gates in each section and one fixed OR gate. Each AND gate has 10 programmable input connections, shown in the diagram by 10 vertical lines intersecting each horizontal line. The horizontal line symbolizes the multiple-input configuration of the AND gate. One of the outputs is connected to a buffer-inverter gate and then fed back into two inputs of the AND gates.

As an example of using a PAL in the design of a combinational circuit, consider me following Boolean functions, given in sum-of-minterms form:

Simplifying the four functions to a minimum number of terms results in the following Boolean functions:

Note that the function for z has four product terms. The logical sum of two of these terms is equal to w. By using w, it is possible to reduce the number of terms for z from four to three. 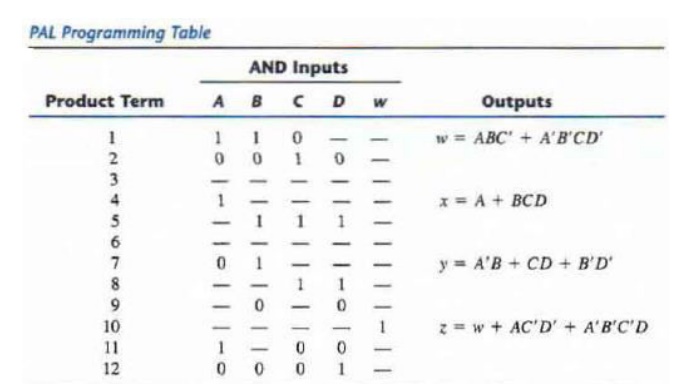