An assay method based on immunological antibody-hapten (Ab-Ha) reaction that makes use of a radioactive tracer is usually known as radioimmunoassay.

An assay method based on immunological antibody-hapten (Ab-Ha) reaction that makes use of a radioactive tracer is usually known as radioimmunoassay. A hapten (or haptene) is a small molecule that represents the portion of an antigenic molecule or complex which determines its immunologic specificity, for instance : cortisol ; whereas an antibody is a relatively large protein that is specific for certain haptens. An antibody is generated by binding the hapten to a protein, resulting into the formation of an antigen that specifically stimulates the immune system to produce antibodies specific for the hapten.

Generally, a radioimmunoassay makes use of a radioactive hapten and subsequently the percent of radioactivity bound to the antibody is measured. The radioactivity is determined by the help of a Geiger-Müller Counter or Geiger-Counter or G-M Tube and sometime by a Scintillation Counter.

First of all, a ‘Standard Curve’ or a ‘Calibration Curve’ is plotted between the reciprocal value (i.e., 1 × % –1 radioactivity bound to the antibody) versus the amount of standard for a series of unknowns. Thus, the amount of hapten present in the unknown sample is measured from the plotted calibration curve conveniently.

The radioimmunoassay is based on the evolved competition between the combination of radioactive (Ha+) and nonradioactive (Ha) hapten to the antibody as represented below :

Let us assume that the binding constants for Ha+ and Ha are equal ; now, for a fixed quantity of Ha+ but an increased concentration of Ha. The ultimate impact would be that lesser Ha+ shall be bound. In actual practice, however, the use of Tritium (H3) or Carbon-14 (C14), which helps to render the Ha radioactive, ulti-mately maintains the equality of these binding constants, namely : KHa+ and KHa . It also confirms that the chemical properties of both radioactive (Ha+) and nonradioactive (Ha) entities are more or less the same as far as the antibody is concerned.

·              cortisol (17-hydroxycorticosterone or hydrocortisone), insulin, morphine, barbiturates (sedatives), vitamin B12, digoxin and human growth hormones, such as : somatotropin (elaborated in the placenta),

·              Incidence of interferences observed in the radioimmunoassays are fairly insignificant by virtue of the highly specific hapten-antibody complexation reaction, and

·              Exceptions do occur when two 5-substituted barbiturates present together cannot be assayed by this method, obviously due to interference.

Cortisol (or hydrocortisone) was introduced in the year 1951, for the treatment of rheumatoid arthritis. It has a significant effect on protein metabolism. It also exerts widespread effects on carbohydrates, lipid and protein synthesis (or anabolism). The cardinal side effects such as excessive potassium excretion and sodium retention, enhanced gastric acidity, oedema, psychosis and negative nitogen balance are some of the exaggerated manifestations of the normal metabolite functions of cortisol.

Most importantly, the determination of cortisol levels is considered useful in the diagnosis and treatment of various ailments, namely : Addison’s Disease i.e., pernicious anaemia—a condition whereby the maturation of the red cells may not proceed beyond the stage of megaloblasts; Cushing’s Syndrome.

The assay-method is entirely based on the Schwartz-Mann Kit. According to this method, cortisol is first extracted from the plasma using CH2Cl2 (methylene chloride). In the actual radioimmunoassay the cortisol present in the extract competes with Cortisol-H3 (i.e., the radioactive tracer) for the common binding sites on transcortin, which is incidently not an antibody but a cortisol-binding protein. Now, the free cortisol is quantitatively removed by adsorption on dextran-coated charcoal from the one bound to the transcortin. Finally, the bound radioactivity (due to Cortisol-H3) is measured which is then employed to calculate exactly the amount of cortisol present in the sample by the help of a Standard Curve (or Calibration Curve).

The various steps to be followed sequentially for the assay of cortisol in plasma are as follows :

Place 100 μ l of plasma in each of two tubes and add 2.5 ml of methylene chloride. Shake the contents of the tube vigorously for 10 minutes and transfer 0.5 ml of clear extract (i.e., the lower layer) to another tube. Evaporate the methylene chloride either at 35°C in an oven or in a stream of N2. The extract thus obtained is employed in the following step.

·              The following steps viz., Step 1 to Step 15, related to the procedure for the assay and the calibration curves must be performed simultaneously : 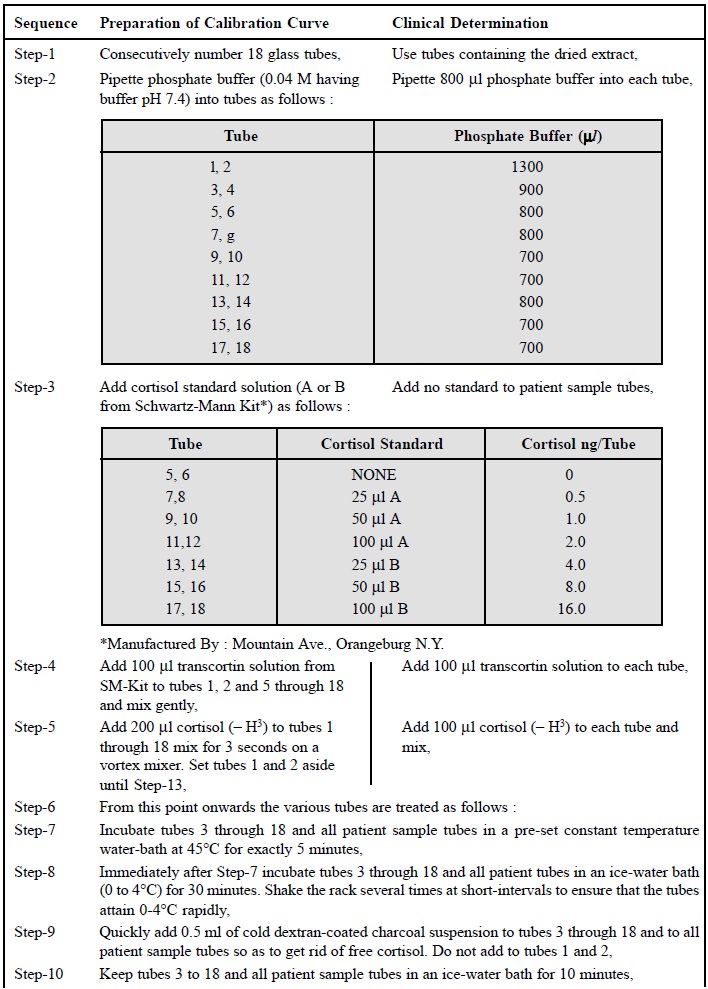 Finally, plot the percent bound Vs nanograms (ng) per tube of cortisol standard either on linear or on semilog paper and make use of this Standard Curve to calculate the amount of cortisol present in the unkown samples.