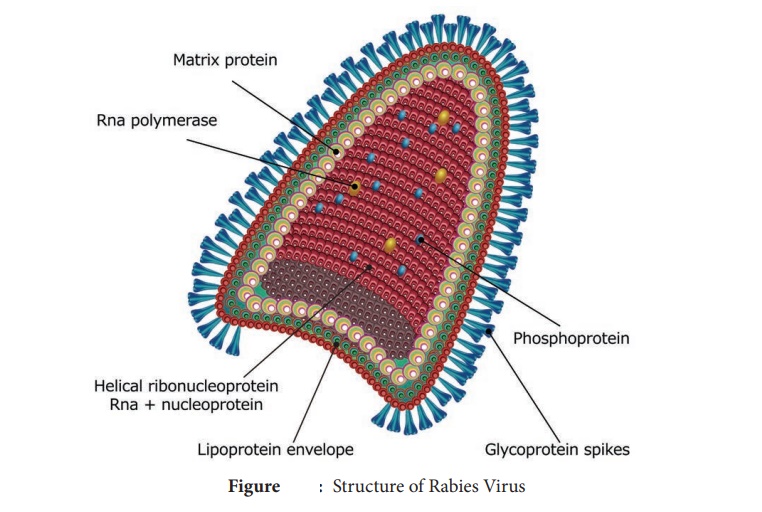 The Family Rhabdoviridae contains viruses that infects mammals, reptiles, birds, fishes, insects and plants. The disease in human being is called hydrophobia because the patient exhibits fear of water, being incapable of drinking though subject to intolerable thirst.

The Family Rhabdoviridae contains viruses that infects mammals, reptiles, birds, fishes, insects and plants. The disease in human being is called hydrophobia because the patient exhibits fear of water, being incapable of drinking though subject to intolerable thirst.

Pasteur established that the rabies virus was present in the brain of infected animals. By serial intracerebral passage in rabbits, he demonstrated fixed virus that could be rendered immune by a series of injections. Vaccine was prepared by drying pieces of spinal card from rabbits infected with the fixed virus.

Joseph Meister a nine year old boy, severely bitten by a rabid dog and in grave risk of developing rabies, was given a course of 13 inoculations of the infected cord vaccine by

Pasteur. The boy survived. This dramatic event was a mile stone in the development of medicine.

The rabies virus is bullet shaped, with one end rounded or conical and the other planar or concave. The lipoprotein envelope, carries knob like spikes, composed of glycoprotein G responsible for pathogenesis, virulence and immunity beneath the envelope is the matrix (M) protein layer which may be invaginated at the planar end. The membrane may project outwards forming a bleb. The genome is unsegmented linear RNA (Figure 10.6). 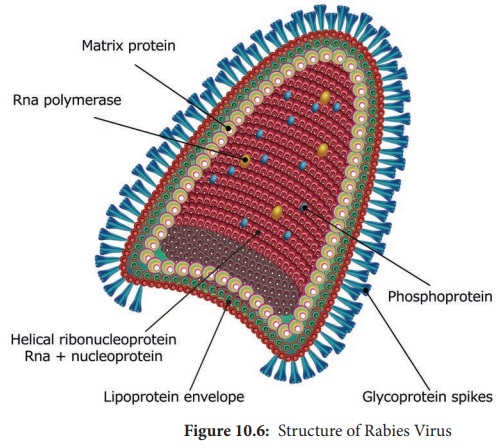 The rabies virus isolated from natural human or animal infection is termed ‘the street virus’. Rabies has been recognized from very ancient times as a disease transmitted to humans and animals by the bite of ‘mad dogs’. The name rabies comes from the Latin word rabidus, meaning ‘mad’, derived from the Sanskrit root rabhas, for frenzy

Human infection is usually caused by the bite of rabid dogs or other animals. The virus present in the saliva of the animal is deposited in the wound (Figure 10.7). Rarely, infection can also occur following non-bite exposures such as licks or aerosols. 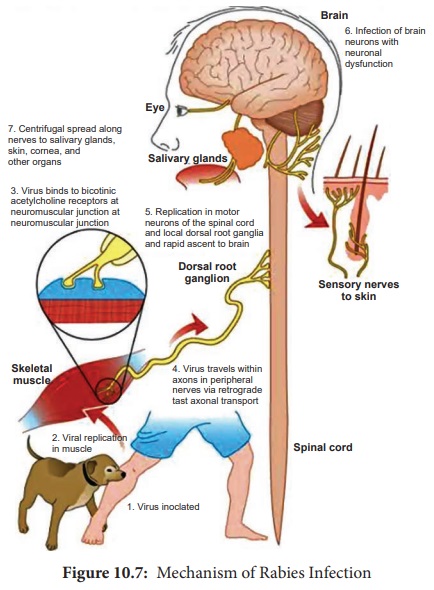 The virus appears to multiply in the muscles, connective tissue or nerves at the site of deposition for 48-72 hours. It penetrates the nerve endings and travels in the axoplasm towards the spinal cord and brain , at speed of about 3 mm per hour. The virus multiples and spreads centrifugally along the nerve trunks to various parts of the body including the salivary glands. It multiplies in the salivary glands and is shed in the saliva. The virus reaches every tissue in the body and dissemination may be interrupted at any stage by death. In humans the incubation period is usually from 1–3 months, short as 7 days or as long as three years. The incubation period is usually short in persons bitten on the face or head and long in those bitten on the legs. This may be related to the distance the virus has to travel to reach the brain. The incubation period is generally shorter in children than in adults.

The four stages of the disease are as follows, prodrome, acute encephalitic phase, coma and death. The onset is marked by symptoms such as fever, headache, malaise, fatigue and anorexia, anxiety, agitation, irritability, nervousness, insomnia or depression. The neurological phase begins with hyperactivity. Attempts to drink during such painful spasms of the pharynx and larynx produce choking or gagging that patients develop a dread of even the sight or sound of water (hydrophobia).

In dogs, the incubation period is usually 3–6 weeks but it may range from 10 days to a year. The initial signs are an alert, troubled air and restlessness, snapping at imaginary objects, licking or gnawing at the site of the bite.

After 2–3 days of this prodromal stage, the disease develops into either the furious or dumb types of rabies. In furious rabies, dog runs biting without provocation, the lower jaw droops and saliva drools from the mouth. Paralysis convulsions and death follow. In dumb rabies, is the paralytic form, animals lies huddled, unable to feed. About 60% of rabid dogs shed the virus in saliva. Rabid dogs usually die in 3-5days

Negri bodies in the brain, are demonstrated, Isolation of the virus by intracerebral inoculation in mice can be attempted from the brain, CSF, saliva and urine. The mice are examined for signs of illness, and their brains are examined after death.

The whole carcass of the animal suspended to have died of rabies may be sent to the laboratory. The brain may be removed sent for biological test and microscopy respectively. The portion of brain sent should include the hippocampus and cerebellum as negri bodies are most abundant. The following tests are done in the laboratory.

2. Demonstration of inclusion bodies - Negri bodies are seen as intracytoplasmic, round or oval purplish pink with characteristic basophilic inner granules. Negribodies vary in size from 3.27 Mm.

• Prompt cauterization of the wounds helps to destroy the virus.

• Antirabic serum may be applied topically.

Suspension’s of nervous tissues of animals infected with the fixed rabies virus. Following are the modified forms.

1. Semple Vaccine: Vaccine developed by semple (1911). It is a 5% suspension of sheep brain infected with fixed virus and inactivated with phenol at 37°C leaving noresidual live virus.

Human rabies immune globulin (HRIG) is free from the danger of sensitization but should be ensured free from HIV and hepatitis viruses.

Antirabies immunization in animals is to be done as pre -exposure prophylaxis concentrated cell culture vaccines – inactivated virus gives good protection after a single Intramuscular injection. Injections are given at 12 weeks of age and repeated at 1–3 years intervals.