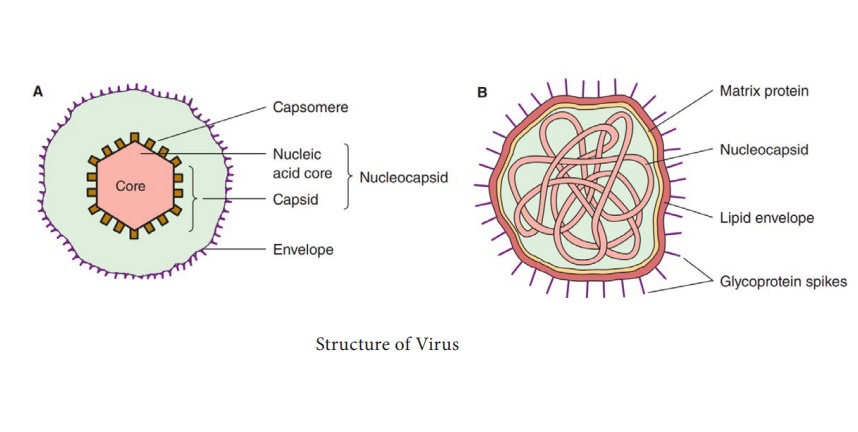 The origin of viruses is not known, but two theories of vital origin can be summarized as follows;

i. Viruses may be derived from (DNA or RNA) nucleic acid components of host cells to replicate and evolve independently.

ii. Viruses may be degenerate forms of intracellular parasites.

The virion consists of nucleic acid surrounded by a protein coat, the capsid. The capsid with the enclosed nucleic acids is known as the nucleo capsid. The capsid is composed of a large number of capsomers. The functions of the capsid are to protect the nucleic acid from the deleterious agents and also to introduce viral genome into host cells by adsorbing readily to cell surfaces (Figure 10.1). Two kinds of symmetry encountered in the virus are icosahedral and helical. Virions may be enveloped or non enveloped (naked). The envelope or outer covering of viruses is derived from the host cell membrane when the progeny virus is released by budding. The envelope is lipoprotein in nature. The lipid is of host cell origin while the protein is virus coded. Protein subunits may be seen as projecting spikes on the surface of the envelope and are known as Peplomers. 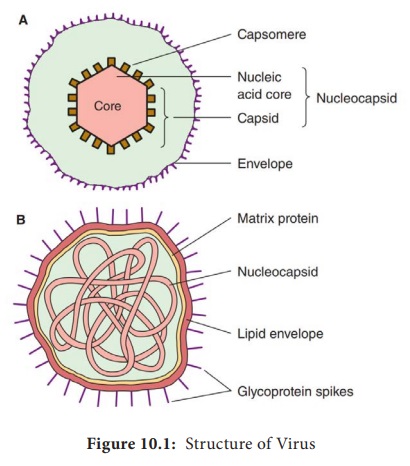 Overall shape of the virus particle varies; mostly animal viruses are roughly spherical. Some are irregular and pleomorphic. The rabies virus is bullet shaped, Ebola virus is filamentous and pox viruses are brick shaped.

Viral protein determines the antigenic specificity of the virus. Some viruses contain small amounts of carbohydrates. Most Viruses do not possess any enzymes but retro virus has a unique enzyme, such as RNA dependent DNA polymerase or transcriptase which can synthesise DNA from RNA.

Viruses are inactivated by sunlight, UV rays and ionizing radiations. The most active antiviral disinfectants are oxidizing agents such as hydrogen peroxide, potassium permanganate and hypochlorites. Organic iodine compounds are actively virucidal. Chlorination of drinking water kills most viruses but its efficacy is influenced by the presence of organic matter. Some viruses such as hepatitis virus, polio viruses are relatively resistant to chlorination.

The genetic information necessary for viral replication is contained in the viral­ nucleic acid, and also depends on the syn-thetic machinery of the host cell for rep-lication. The Viral replication cycle can be divided into six steps and they are as follows, 1. 1.Adsorption or attachment,Penetration, 3. Uncoating, 4. Bio synthesis, 5.Maturation and 6. Release.

Virions may come into contact with cells by random collision but adsorption takes place only if there is an affinity between the virus and the host. The cell surface should contain specific receptor site for the virus to attach on to it.

Bacteria possess rigid cell walls, only the viral nucleic acid is introduced intracellularly by a complex mechanism. Animal cells do not have rigid cell walls and the whole virus can enter and virus particles may be engulfed by a mechanism resembling phagocytosis, a process known as ‘Viropexis’. In case of the enveloped viruses, the viral envelope may fuse with the plasma membrane of the host cell and release the nucleocapsid into the cytoplasm.

Release of the viral nucleic acid from the capsid into the host cell. With most viruses, uncoating is affected by the action of lysosomal enzymes of the host cell.

In case of bacterial viruses, the release of progeny virions takes place by the lysis of the infected bacterium. However, in the case of animal viruses, release usually occurs without cell lysis. Eclipse phase is from the stage of penetration till the appearance of mature daughter virions. The virus cannot be demonstrated inside the host cell. The virus seems to disappear (Figure 10.2). 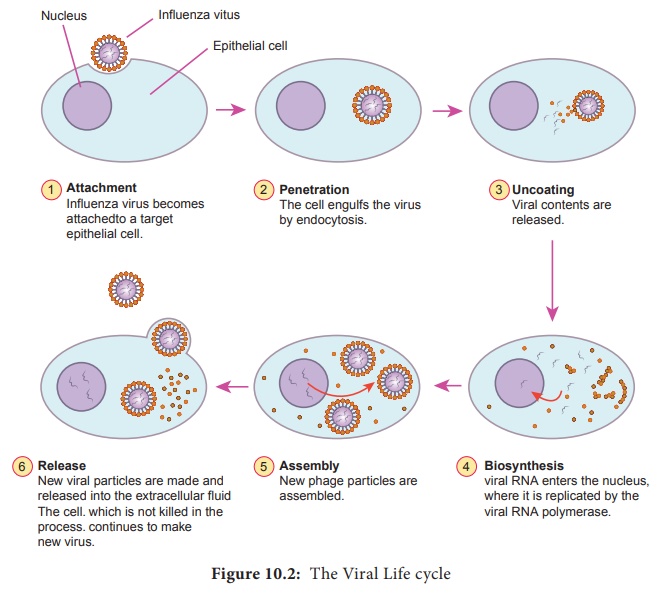 Viroids Viriods are small, single stranded covalently closed circular RNA molecules existing as highly base paired rod like structure. The viroid depends on the host for replication. These are responsible for some of the transmissible plant diseases.

HOTS: Which is more dangerous – bacteria or Virus?

Prions are small proteinaceous infectious agents without genetic material. These are responsible for a number of degenerative brain diseases (Example: Creutzfeldt) and hereditary dementia