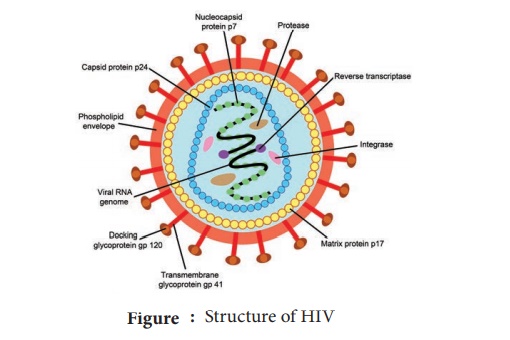 Human Immuno Deficiency Virus (HIV), the etiological agent of AIDS, belongs to the lentivirus subgroup of the family Retroviridae.

Human Immuno Deficiency Virus (HIV), the etiological agent of AIDS, belongs to the lentivirus subgroup of the family Retroviridae.

HIV is a spherical enveloped Virus, about 90-120 nm in size. The nucleo capsid has an outer icosahedral shell and an inner cone shaped core, enclosing the ribonucleo proteins. The genome is diploid, composed of two identical single stranded, positive sense RNA copies. When the virus infects a cell, the Viral RNA is transcribed by the reverse transcriptase enzyme, first into single stranded DNA and then to double stranded DNA (provirus) which is integrated into the host cell chromosome. The virus coded envelope proteins are the projecting knob like spikes which binds to the CD4 receptors on susceptible host cells (Figure 10.8). 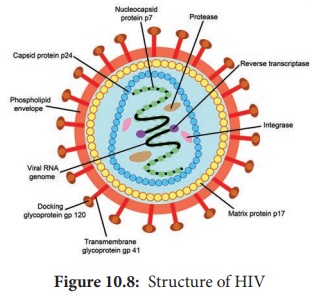 The genome of HIV contains the three structural genes (gag, pol and env) as well as other nonstructural and regulatory genes specific for the virus. These products of these genes, both structural and non structural act as antigens.

1. The gag gene → Determines the core and shell of the Virus. Precursor protein, p55 and it is cleaved into three proteins p15, p18 and p24. Major core antigen p24 can be detected in serum

2. The env gene → Determines the syn-thesis of envelope glycoprotein gp160. Cleaved in to gp120 and gp41

3. The pol gene → Codes for the reverse transcriptase and other viral enzymes such as protease and endonucleases. It’s expressed as a precursor protein, which is cleaved into protein p31, p51 and p66.

Infection is transmitted when the Virus enters the blood or tissues of a person and comes into contact with a suitable host cell, principally the CD4 lymphocyte. The receptor for the virus is the CD4 antigen and therefore the virus may infect any cell bearing the CD4 antigen on the surface. Specific binding of the virus to CD4 receptor is by the envelope glycoprotein gp120. Cell fusion is brought about by transmembrane gp41. After fusion `with the host cell membrane, the HIV genome is uncoated and internalized into the cell. Viral reverse transcriptase mediate transcription of its RNA into double stranded DNA, which is integrated into the genome of the infected cell through the action of the viral enzyme integrase, causing a latent infection. The primary pathogenic mechanism in HIV infection is the damage caused to the CD4+T lymphocyte. The T4 cells decrease is numbers. Infected T 4 cells do not release normal amounts of interleukin, gamma interferon and other lymphokines, this is damping effect on cell mediated immune response.

AIDS is only the last stage in the wide spectrum in HIV infection.

3–6 weeks of infection, persons experience low grade fever, malaise, headache, lymphadenopathy, with rash. Antibodies are usually negative at the onset of the illness but become positive during its course called ‘Sero conversion illness’.

All HIV infected persons, whether or not they experience Sero conversion illness, pass through a phase of symptomless infection which may last up to several years. The infection progresses in course of time through various stages, CD4 lymphocytopenia, minor opportunistic infections, AIDS-related complex (ARC), ultimately terminating to AIDS.

It is defined as the presence of enlarged lymph nodes at least 1cm, in diameter in two or more non contiguous extrainguinal, sites that persists for at least three months.

Drycough, dyspnea and fever. Pheumonia may be viral (cmv) or fungal (Cryptococcus, Histoplasma).

The mouth is often involved with thrush, stomatitis, gingivitis, hairy leukoplakia. Dysphagia due to esophageal Candidiasis. Intestinal pathogen in AIDS is cryptosporidium. Other pathogens are Salmonellae, Mycobacteria, CMV or adeno viruses. Gay bowel syndrome’ is common among the male homosexuals.

The typical CNS opportunistic infections are toxoplasmosis and cryptococcosis. Lymphomas of the CNS are Common.

Kaposi’s Sarcoma was the lesion seen in male homosexuals. The tumours commonly seen are lymphomas, both the Hodgkin and non Hodgkin types.

Direct cytopathogenic damage in the CNS. It cross the blood-brain barrier and cause encepthalopathy leading to dementia.

Viral transmission may occur to the fetus in pregnancy. Many of the infected children may not survive for a year. Children may also acquire the infection from blood transfusion or blood products.

B. Specific tests for HIV infection

Single massive infection, as by blood transfusion, the virus antigens may be detectable in blood after about two weeks. The major core antigen p24 is the virus marker in blood.

It is the most senstitive and specific test.

Demonstration of antibodies is the simplest and widely employed technique. It takes 2–8 weeks to months for antibodies to appear after infection, during this period, the individual may be highly infectious. This sero negative infective stage is known as the ‘window period’. Antibody can be detected by.

The treatment of AIDS include:

1. The treatment and prophylaxis of infections and tumours

Effective drugs are available, they are Zidovudine, Didanosine, Zalcitabine, Lamivudine and Protease inhibitors like Saquinavir, Ritonavir, Indinavir used as monotherapy or in various combination.