The term viral hepatitis refers to a primary infection of the liver, hepatitis viruses consists of types A, B, C, D, E and G. Except for type B which is a DNA virus all the others are RNA viruses.

The term viral hepatitis refers to a primary infection of the liver, hepatitis viruses consists of types A, B, C, D, E and G. Except for type B which is a DNA virus all the others are RNA viruses.

Two types of viral hepatitis had been recognised. Type one affects mainly children and young adults and transmitted by the fecal-oral route called as infective or infectious hepatitits or type A hepatitis. Second type transmitted mainly by receiving serum inoculation or blood transfusion named as homologous serum jaundice, serum hepatitis transfusion hepatitis or type B hepatitis

Type A Hepatitis (HAV)

HAV is a 27nm non enveloped RNA virus belonging to the picorna virus family. It is designated as ‘entero virus 72’, HAV is recognised as new genus ‘Hepatovirus’. It can be grown in human and simian cell cultures and is the only human hepatitis virus which can be cultivated in vitro.

HAV transmission is by the fecal oral route. Infection is by ingestion. The virus multiplies in the intestinal epithelium and reaches the liver by hematogenous spread. Once jaundice develops, it is rarely detectable in feces. The incubation period is 2 - 6 weeks. The clinical disease consists of two stages the prodromal and the icteric stage. The onset may be acute with fever, malaise, anorexia, nausea, vomiting and liver tenderness. These usually subside with the onset of jaundice. Recovery is slow, over a period of 4–6 weeks. The disease is milder in children. Type A hepatitis caused by contaminated food, water or milk. Over crowding and poor sanitation favour its spread.

Diagnosis of type A hepatitis may be made by demonstration of the virus or its antibody. Virus can be visualized by Immunelectron Microscopy (IEM) in fecal extracts during the late incubation period.

IgM anti-HAV antibody appears during the late incubation period disappears after 3-4 months. IgG peaks in 3-4 months and persists much longer for life. ELISA kits for detection of IgM and IgG antibodies are available.

Does HSV shorten your lifespan?

Becoming infected with the herpes virus seriously complicates your ­social, emotional and sexual life, but it is not otherwise a terribly dangerous condition to have. Having genital herpes does make it easier to get HIV (and thus AIDS), but ­otherwise, the condition is not disabling, and does not ­reduce lifespan.

A safe and effective formalin inactivated, alum conjugaged vaccine containing HAV grown in human diploid cell culture is used. Course consists of two intra muscular injections of the vaccine. Protection begins 4 weeks after injection and lasts for 10 to 20 years. No specific antiviral drug is available.

HBV is a 42nm DNA virus with an outer envelope and an inner core 27nm in diameter. Enclosing the viral genome and a DNA polymerase . It belongs to the family Hepadna Viridae HBV is ‘Hepadna Virus type 1’. Australia antigen was found to be associated with serum hepatitis. It was the surface component of HBV, so named as hepatitis B surface antigen (HBsAg). 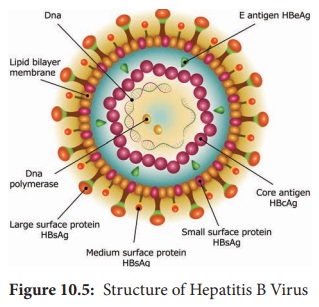 The nucleocapsid encloses the viral genome consisting of two linear strands of DNA held in a circular configuration. One of the strands is incomplete (+ strand) DNA appears partially double stranded and partially single stranded. Associated with the + strand is a viral DNA polymerase (has both DNA dependent DNA polymerase and RNA dependent reverse transcriptase functions). This polymerase can repair the gap in the plus strand and render the genome fully double stranded.

Natural infection occurs only in humans. The virus is maintained in carriers whose blood contains circulating virus for long periods. Carriers are of two categories, the highly infectious super carriers and the simple carriers. Former have high titre HBsAg along with HBsAg, DNA polymerase and HBV in ciruculation. Simple carriers have low infectivity and low titre HBsAg in blood.

HBV is a blood borne virus and the infection is transmitted by parenteral, sexual and perinatal models. The virus may also be present in other body fluids and excretions such as saliva, breast milk, semen, vaginal secretions, urine bile and feces of these semen and saliva are known to transmit the infection very commonly. Transfusion of carrier blood once, the most widely known mode of infection has largely been eliminated by donor screening that is strictly enforced. Infection by direct contact with open skin lesions such as pyoderma, eczema, cuts and scratches is very common among young children in developing countries. Certain groups and occupations carry a high risk of infection. These include medical and paramedical staff of blood banks, dialysis units, barbers, sex workers

The incubation period is long about 1- 6 months. The onset is insidious and fever is not prominent. Extra hepatic complications like arthralgia, urticaria and glomerulonephritis may occur. About 90-95% of adults with acute hepatitis infection recover within 1-2months of onset and eliminate the virus from the body. They may be Asymptomatic carriers or may progress to recurrent or chronic liver disease..

Diagnosis of hepatitis B depends on the serological demonstration of the viral markers. HBsAg is the first marker to appear in blood after infection, being detectable. It remains in circulation throughout the symptomatic course of the disease (2- 6months). Anti HBs is the protective antibody.

HBcAg is not demonstrable in circulation because it’s enclosed within the HBsAg coat but its antibody, anti HBc appears in serum a week or two after the appearance of HBsAg. As anti HBc remains life long, it serves as a useful indicator of prior infection with HBV.

HBeAg appears in blood concurrently with HBsAg, indicating the high infectivity. Molecular methods such as DNA: DNA hybridization and PCR at present used for HBV DNA testing are highly sensitive and quantitative.

Both passive and active methods of immunization are available. Active immunization is more effective. The currently preferred vaccine is genetically engineered by cloning the S gene for HBV in Baker’s yeast. A special vaccine containing all antigenic components of HBsAg (Pre- S1, Pre-S2 and s) has been developed. No specific antiviral treatment is available for acute HBV infection.