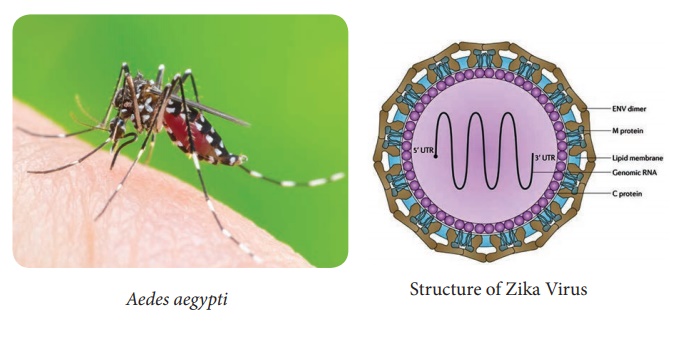 Arbo Viruses (arthropod - borne viruses) are viruses of vertebrates biologically transmitted by hematophagous insect vectors. They multiply in blood sucking insects and are transmitted by bite to vertebrate hosts. Arbo viruses are worldwide in distribution. Arbo viruses have been named according to the disease caused (yellow fever), the place of isolation of the virus (kyasanur forest disease) or the local name for the disease (chikungunya). They are classified into Toga, Flavi, Bunya, Reo and Rhabdovirus families. Arbo viruses have a very wide host range including many species of animals and birds. The most important arbo virus vectors are mosquitoes, followed by ticks.

The virus enters the body through the bite of the insect vector. After multiplication in the reticuloendothelial system, viremia of varying duration occurs, or the virus is transported to the target organs such as central nervous system in encephalitis, the liver in yellow fever and the capillary endothelium in hermorrhagic fever.

Clinical syndromes are fever with or without rash, encephalitis, hemorrhagic fever, systemic disease and yellow fever.

Diagnosis may be established by virus isolation or serology.

Toga viruses are spherical enveloped viruses with a diameter of 50-70nm Single stranded RNA genome. The virus replicates in the cyloplasm of the host cell and released by budding through host cell membranes. The name Toga Virus is derived from ‘toga’ meaning the Roman Mantle refers to the viral envelope.

The virus was first isolated from human patients of Aedes aegypti mosquitoes (Figure 10.9) from Tanzania in 1952. The name Chikungunya is derived from the native word for the disease in which the patient lies ‘doubled up due to severe joint pains’. The virus first appeared in India in 1963 in Calcutta, Madras and Other areas. 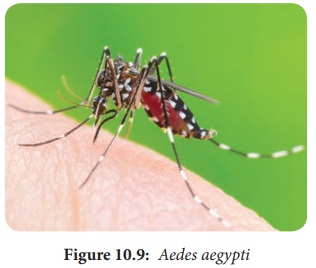 The disease presents as a sudden onset of fever, Crippling joint pains, lymphadenopathy and conjunctivitis. A maculopapular rash in common. The fever is typically biphasic with a period of remission after 1–6 days of fever. The vector is Aedes aegypti . No animal reservoir has been identified. Antibody to the virus has been demonstrated in horses, cattle and other domestic animals.

The name dengue is derived from the ‘Swahili ki denga pepo’, meaning a sudden seizure by a demon. Dengue fever is similar to the illness caused by chikungunya. Four types of dengue virus exist: DEN1, DEN2, DEN3 and DEN4.

HOTS: What is the best home remedy for dengue fever?

Dengue presents after an incubation period of 3 -14 days as fever of sudden onset with headache, retrobulbarpain, conjunctival injection, pain in the back and limbs (break bone fever), lymphadenopathy and maculopapular rash. The fever is typically biphasic (saddle back) and lasts for 5–7 days. Dengue may be more serious forms with hemorrhagic manifestations (dengue Hemorrhagic fever) or with shock (dengue shock syndrome).

Dengue virus is transmitted from person to person by Aedes aegypti mosquitoes. The Incubation period is 8–10days. All four types of dengue virus are identified. Demonstration of circulating IgM antibody provides early diagnosis. IgM ELISA test offers reliable diagnosis. Difference between Dengue and Chikungunya is given in Table 10.2. 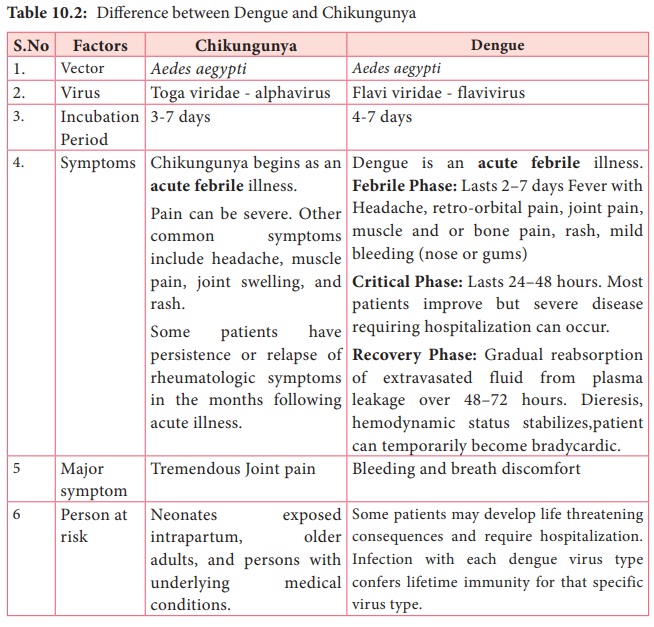 Zika virus is a mosquito-borne flavivirus that was identified in Uganda in 1947 in monkeys. Zika spreads by daytime-active Aedes mosquitoes, such as A. aegypti and A. albopictus. The infection is known as Zika fever or Zika virus disease . Zika is related to the dengue, yellow fever, Japanese encephalitis, and West Nile viruses 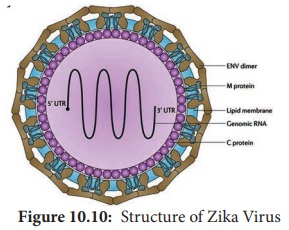 Zika virus is primarily transmitted by the bite of an infected mosquito from the Aedes genus, mainly Aedes aegypti. The mosquitoes usually bite during the day, peaking during early morning and late afternoon or evening. This is the same mosquito that transmits dengue, chikungunya and yellow fever. Zika virus is also transmitted from mother to fetus during pregnancy, through sexual contact, transfusion of blood and blood products, and organ transplantation.

The incubation period of Zika virus disease is estimated to be 3–14 days . The majority of people infected with Zika virus do not develop symptoms. Symptoms are generally mild including fever, rash, conjunctivitis, muscle and joint pain, malaise, and headache, and usually last for 2–7 days. Zika fever (also known as Zika virus disease) is an illness caused by the Zika virus. Zika virus infection during pregnancy is a cause of microcephaly and other congenital abnormalities in the developing fetus and newborn. Zika infection in pregnancy also results in pregnancy complications such as fetal loss, stillbirth, and preterm birth.

Which fruit is good to increase platelet count?

Pomegranate is another great fruit you can eat to increase platelets. As with all redfruits, the seeds of this deliciousfruit are packed with iron, an essential mineral for combating low platelet count. Pomegranate has been used since the ancient times for its healthy and medicinal properties.

Virus can be demonstrated from the blood or other body fluids, such as urine or semen.