The bark of the Cinchona tree (Fig 30.6) yields both quinine and quinidine which have been around for more than 350 years.

The bark of the Cinchona tree (Fig 30.6) yields both quinine and quinidine which have been around for more than 350 years. Quinidine is a more powerful antimalarial than quinine, but is unfortunately also much more toxic. Hydroquinidine is a related drug with actions and uses similar to those of quini-dine. Quinine is very bitter (the bitterness threshold of quinine hydrochloride is 1:30,000). 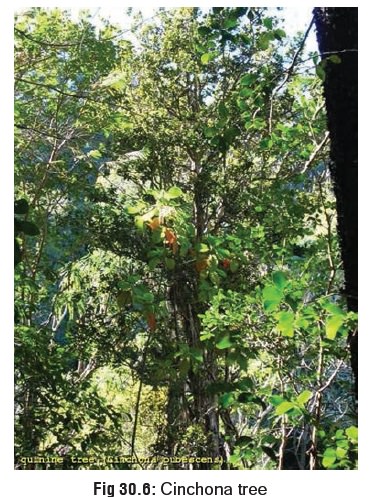 ·      Quinine is mainly indicated in the treatment of chloroquine-resistant and multidrug-resistant falciparum malaria.

·      Quinine is also reportedly beneficial for relieving nocturnal leg cramps, and for the symptomatic relief of myotonia congenita.

·      Tonic water is reported to contain 30 to 80 mg quinine per 1000 ml. Blurring of vision has been reported in individuals consuming 100 to 200 mg quinine via tonic water, and is a potentially serious effect if driving or flying

·      Quinine has been found as an adulterant in illicit heroin samples.

Cinchona alkaloids are rapidly absorbed when given orally or intramuscularly, but the latter mode of administration often leads to tissue necrosis. Peak plasma levels are achieved in 3 hours (2 to 7 hours for quinidine).

Both quinine and quinidine are highly protein-bound. The liver, kidneys, and muscles metabolise 80% of the ingested dose, while 20% is excreted unchanged in the urine. Quinine is oxidised to form several polar hydroxy metabolites. About 17% is excreted unchanged, 17% as 3-hydroxyquinine and 34% as 2-hydroxyquinine. A nonphenolic dihydroxy derivative has also been identified. Renal excretion is greatly enhanced in acidic urine.

·            Repeated therapeutic doses as well as overdose result in a cluster of manifestations referred to as Cinchonism which is characterised by the following:

·              Fixed dilated pupils are seen frequently in children following quinine overdose. Following an overdose, onset of symptoms of oculotoxicity may vary from a few hours to a day or more. In addition to cinchonism, quinine is thought to have either an ischaemic action on the retinal vasculature or a direct toxic effect on the retina, causing constricted visual fields that can progress to blindness with dilated nonreactive pupils. Central vision usually recovers first. Complete recovery of vision may take several months; pupils may remain dilated after recovery of vision. Permanent visual deficits may remain.

·              Hepatotoxicity with therapeutic quinine use has been reported, and has occurred within 24 hours of initiation of a quinine dose, although onset generally occurs after 2 weeks of therapy. On discontinuance of quinine, liver enzyme values usually return to normal.

·              Hypoglycaemia has also been reported. Special care is necessary in diabetics, since the hypoglycaemic effect of antidiabetic drugs can get aggravated.

·              Haemolytic uraemic syndrome (HUS) has occasionally been reported as an adverse effect of quinine therapy. In these cases, the immune-mediated nature of the blood dyscrasia is specific to quinine. The presence of quinine-dependant antibodies to red cells, granulocytes or plate-lets has been demonstrated in some cases. There appears to be no correlation between the type and specificity of antibody and severity of renal failure. Quinine-induced haemolysis and renal failure, due to acute interstitial nephritis, has been reported.

·              Haemolytic anaemia may occur in patients with G6PD deficiency. Immune-mediated pancytopenia and coagu-lopathy may occur at therapeutic doses of quinine. This may be associated with renal failure and the haemolytic uraemic syndrome.

·              Quinine and quinidine are contraindicated in myas-thenia gravis (can aggravate muscle weakness), and in pregnancy (can induce abortion due to oxytocic action). Quinine crosses the placental barrier. Numerous malformations and foetal anomalies have been reported.

·              Quinine has often been used as a home abortifacient, resulting in a 59% incidence of congenital anomalies and 16% of maternal deaths.

·            Quinine can sometimes produce a hypersensitivity reac-tion characterised by massive haemolysis, haemoglobin-uria with passage of dark urine, anuria, and renal failure (black water fever). It occurs usually during the course of treatment of falciparum malaria. A variant form of quinine toxicity, with hypersensitivity mimicking septic shock, has been reported.

·            Chronic therapeutic use of quinidine has been associated with a variety of immune mediated disorders including haemolytic anaemia, thrombocytopenia, an SLE-like syndrome, sicca syndrome (keratoconjunctivitis, arthritis, fever), and lymphadenopathy.

·      Early recognition of visual damage is essential. Eye changes (photophobia, misty vision) usually begin in ½ to 1 hour after overdose and may progress to partial or complete blindness in 6 to 12 hours. While such blindness may resolve over a period of time (1 to 3 weeks), it sometimes becomes permanent.

–– Constriction of retinal arteries and veins. –– Cherry spot at the macula.

The overdosed patient should be hospitalised in an intensive

care facility with immediate attention given to vital signs (blood pressure, pulse, respiration) and careful monitoring of ECG and respiratory status. Patients should be warned of possible blind-ness but reassured that some recovery of sight frequently occurs.

·            Stomach wash (with prior endotracheal intubation) should be undertaken only if the patient is seen within 1 to 2 hours of ingestion.

·            Activated charcoal has been proved to be beneficial and can be administered in the usual manner (1 gm/kg). Despite quinine’s relatively large volume of distribution, high protein binding, and poor in vitro adsorption by charcoal, studies have shown enhanced elimination with multiple-dose-charcoal regimens in therapeutic doses and overdoses. It should be considered in patients with potentially life-threatening overdose.

·            While acid diuresis promotes clearance of quinine and quinidine, it is associated with cardiotoxicity and hence is not recommended. On the other hand, serum alkalinisation with sodium bicarbonate can be beneficial. It is desirable to achieve and maintain a serum pH of 7.45 to 7.50.

·            For hypotension: Pure or predominant alpha agonistsmay be more effective in managing hypotension. These include noradrenaline and metaraminol.

·            Continuous cardiac monitoring is essential. Alkalinisa-tion of serum usually prevents conduction abnormalities and arrhythmias. Treat QRS widening and/or ventricular arrhythmias with intravenous bicarbonate. A reasonable starting dose is 1 to 2 mEq/kg as an intravenous bolus. Repeat as necessary to maintain arterial pH 7.45 to 7.55. Administration of Class I, II, and III antiarrhythmic agents is contraindicated. Ventricular tachycardia/fibril-lation can be corrected by direct-current cardioversion. Torsade de pointes can be tackled with magnesium sulfate, isoproterenol or overdrive pacing, while trans-venous pacing is useful for complete heart block.

·            Correction of acidosis, electrolyte imbalance, and hypoxia are imperative for the successful management of cardiotoxicity.

·            For convulsions, attempt initial control with a benzodiaz-epine (diazepam or lorazepam). If convulsions persist or recur administer phenobarbitone. Evaluate for hypoxia, electrolyte disturbances and hypoglycaemia.

o     Visual damage may be minimised by stellate ganglion block, but there appears to be some controversy regarding this. Specific treatment for quinine retinal toxicity has so far not been evolved. Vision usually improves with appropriate prompt reversal of systemic toxicity, though pupils may remain dilated for a long time even after complete restoration of eyesight.

o     There is a report of a case of blindness (an infant who ingested 600 mg) which was treated with intravenous isosorbide dinitrate. An ophthalmological review 6 weeks post- discharge showed full restoration of sight.

·            In another case of quinine poisoning resulting in bilateral visual loss with retinal arteriolar constriction, fluctuating visual loss suggested an element of vasospasm. The authors chose to use IV nimodipine (0.01 mg/kg/hr) for vasospasm, and IV hydration with 0.9% saline to main-tain a central venous pressure of at least 9 mmHg. In addition, IV noradrenaline was administered to maintain a systolic blood pressure of 140–180 mmHg. Over the next 24 hours, the patient’s vision improved to 6/9 bilat-erally and did not deteriorate again. Within 12 hours of the therapy, retinal blood flow was noted to be improved on direct fundoscopy.

·            Haemodialysis combined with resin haemoperfusion may help in eliminating quinine from the blood. Exchange transfusion does not appear to be beneficial.

·            Hyperbaric oxygen therapy has been recommended by some investigators but its actual efficacy is in doubt.