Clindamycin is a congener of lincomycin, and though it is not structurally related to erythromycin and chloramphenicol, it has a similar mode of action, i.e. binding to the 50s subunit of bacterial ribosomes and suppression of protein synthesis.

Other Antibacterial Drugs (in random order)

Clindamycin is a congener of lincomycin, and though it is not structurally related to erythromycin and chloramphenicol, it has a similar mode of action, i.e. binding to the 50s subunit of bacterial ribosomes and suppression of protein synthesis. It is administered mainly for anaerobic infections either orally or parenterally. It is especially effective in infections due to Bacteroides fragilis, and in some staphylococcal and strepto-coccal infections. Clindamycin has antiprotozoal actions also, and is administered systemically in combination with other antiprotozoal agents for the treatment of babesiosis, malaria, and toxoplasmosis. Clindamycin is also used for the topical treatment of acne vulgaris as a gel or cream.

Adverse effects include diarrhoea which may sometimes be due to a serious complication—pseudomembranous colitis. This is in fact a widely reported adverse effect of lincomycin and clindamycin therapy when administered orally

and/or parenterally. The colitis usually presents with loose stools or diarrhoea that may be bloody. In cases of more severe disease, patients may have fever, leucocytosis, nausea and vomiting, tenesmus, and abdominal tenderness or cramping. Diagnosis can be established by proctoscopy, sigmoidoscopy, or by a barium contrast study. If pseudomembranous colitis is present, these procedures may reveal erythematous, friable mucosa covered with small, raised, yellowish-white plaques, and the formation of pseudomembranes. Symptoms usually appear after 5 to 10 days of antibiotic therapy, although this can be variable. Protein-losing enteropathy, toxic megacolon, and perforation of the colon occur occasionally, and are serious complications that may lead to shock and death. Even topical clindamycin, used to treat facial acne, has caused pseudomem-branous colitis.

Clindamycin has been reported to cause hepatotoxicity, including elevated liver enzyme levels and cholestatic liver disease with reduced numbers of bile ducts. Acute renal failure has occurred following combination therapy of gentamicin and clindamycin.

Acute ingestion of lincomycin and clindamycin has not been associated with significant toxicity. Gastrointestinal decontamination is generally NOT necessary. The use of diphe-noxylate hydrochloride-atropine sulfate is NOT recommended for the treatment of lincomycin- or clindamycin-induced diar-rhoea. Discontinuation of the drug usually results in improve-ment of the diarrhoea.

For pseudomembranous colitis: Metronidazole 750 mg orallyevery 6 hours for 7 days can rapidly eliminate C. difficile toxin from the stools and shorten the course of illnessis. Vancomycin therapy, 500 mg orally every 6 hours for 7 to 10 days is an alternative therapy. In debilitated patients with recurrent C.difficile colitis, parenteral gamma-globulin (400 mg/kg intra-venously every 3 weeks), and replacement of colonic bacteria with Saccharomyces boulardii, a non-pathogenic yeast, have been advocated.

Neither haemodialysis nor peritoneal dialysis appear to be effective in reducing lincomycin or clindamycin levels significantly.

Vancomycin is a chromatographically purified, tricyclic glycopeptide antibiotic derived from Amycolatopsis orientalis (formerly Nocardia orientalis). It is very useful in the treatment of serious infections caused by methicillin-resistant staphylo-cocci and penicillin-resistant pneumococcal infections. It is also effective against Clostridium difficile which causes pseudomem-branous colitis. Vancomycin is usually only administered intravenously. It may be administered orally for treatment of staphylococcal enterocolitis and antibiotic-associ-ated pseudomembranous colitis caused by C. difficile. Parenteral administration is not effective for the above indications.

Adverse effects include skin rashes, anaphylaxis, fever, ototoxicity (sensorineural hearing loss), and nephrotoxicity. The actual number of cases of ototoxicity associated with vancomycin use is small, and most cases of permanent hearing loss have been associated with the co-administration of an aminoglycoside. Severe lacrimation and conjunctivitis have been seen with therapeutic use. Nephrotoxicity can occur with excessive serum levels but is usually reversible upon discon-tinuation of the drug. Reversible neutropenia which usually develops within the first week or more after the start of therapy or after a total dose of 25 grams or more has been reported in several dozen individuals. The effects promptly reverse when therapy is withdrawn. 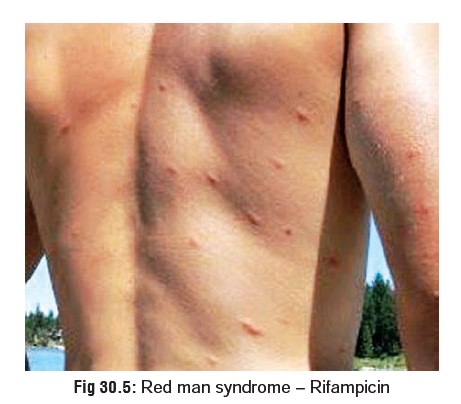 Rapid IV infusion can cause tachycardia and hypotension. Occasionally, this results in the Red man syndrome (Fig 30.5)* or Red neck syndrome, which is characterised by hypotension, pruritis, cutaneous flushing (face, neck, chest, and arms), chest pain, and dyspnoea. Earlier it was thought to be caused by impurities in the drug formulation, but now it is postulated that the syndrome occurs because of vancomycin-induced release of endogenous histamine. Reactions generally resolve within 20 minutes, but may persist for several hours. The incidence and severity can be minimised by antihistamine prophylaxis, lower and more frequent vancomycin dosing, and 2-hour infusions.

Acute vancomycin overdose results in oliguria and renal failure. Toxicity is reported at levels sustained above 80 to 100 mcg/ml. Hypotension, apnoea, deafness, and flushed skin have been reported after overdose. Treatment involves multi-dose activated charcoal (even if vancomycin has been given IV), and institution of supportive measures. Gastrointestinal absorption of vancomycin is negligible; decontamination is rarely indicated unless coingestants are involved. Monitor the patient for development of possible ototoxicity, nephrotoxicity, haematopoietic, or cardiac abnormalities. While haemodialysis and charcoal haemoperfusion are not effective, continuous arteriovenous haemofiltration may be beneficial. However there are some reports of efficacy with haemodialysis also.

Teicoplanin obtained from Actinoplanes teichomyetius is a new antibiotic with a spectrum of activity similar to vancomycin.

However, unlike the latter, it can be given by intramuscular injection. Once-daily dosing is sufficient for the treatment of most infections since it has a prolonged serum elimination half-life. Adverse effects include skin rash, fever, neutropenia, and ototoxicity (rare).

It is an antibiotic produced by Strep. spectabilis, and is used mainly for the treatment of gonorrhoea in patients who are intolerant or allergic to beta-lactam antibiotics and quinolones. Spectinomycin is given by intramuscular injection, and in rare instances can cause urticaria, fever, chills, vertigo and insomnia.

Polymyxin B and Colistin (Polymyxin E)

These antibiotics obtained from Bacillus species of micro-organisms are highly nephrotoxic and hence not advised to be administered systemically. Polymyxin B sulfate is available in India for ophthalmic, otic, and topical use, as well as for systemic use.

It is an antibiotic produced by Bacillus subtilis, and is actually a group of polypeptides, the most active of which is Bacitracin A. It is mainly employed for ophthalmic and topical use in combination with other drugs such as neomycin, polymyxin, and hydrocortisone. The major use of bacitracin is topical treatment of gram-positive infections on the skin or in the eye. The drug is also used prophylactically to prevent dermal infec-tions. Intramuscular bacitracin is available to treat infants with pneumonia and empyema caused by susceptible staphylococci; however, it is rarely used because of the availability of more effective and less toxic agents. Parenteral use is associated with serious nephrotoxicity and ototoxicity. Transient epigastric distress, including nausea, vomiting, diarrhoea, or anal itching or burning may occur with therapeutic use. Several cases of anaphylaxis have been reported with the use of bacitracin ointment.