a. Rural to Urban

b. Urban to Rural

[Answer: a) Rural to Urban]

2. A person moves from his own country to another country is known as ______

3. The migration in search of fertile agricultural land is ______ migration

a. Rural to Rural

b. Rural to Urban

[Answer: a) Rural to Rural]

5. The main reason for the development of urbanisation in pre-historic period was _____

a. Excess Production of food grains

b. Domestication of cattle

1. Urbanisation is determined by Three number of factors

2. Poverty is the major push factor operating in rural areas

3. Delhi Metropolitan city in India has the second highest urban population in the world

4. The movement of a person based on his free will and desire to live in a better place is called Voluntary migration

5. In modern time urban growth was accelerated by the development of Industries.

IV State whether the following statements are true or false

2. Mass migration is absent in the modern period [Answer: True]

3. The process of Urbanisation has a short history [Answer: Fales]

Correct statement: The process of Urbanisation has a long history

4. Cities and towns are the major polluters of environment [Answer: True]

Statement (A): Urbanisation is mainly due to the movement of people from rural to cities.

Reason (R) : Rural to Urban migration is not a predominant one.

a. A is correct but R is incorrect

b. Both A and R are incorrect

c. Both A and R are correct

d. A is incorrect and R is correct

[Answer: a) A is correct but R is incorrect]

Answer: Migration has been defined differently by different experts. In general migration is defined as the permanent or semi permanent change of residence of an individual or group of people over a significant distance. So, the term migration refers to the movement of people from one place to another.

2. What are the causes of rural to urban migration?

Answer: Causes for rural to urban migration are

(i) In search of employment

(ii) In search of good education and

3. State the causes of the ecological or natural migration.

(i) The causes of the ecological or natural migration i) Volcanic eruption, ii) Earthquake, iii) Flood, iv) Drought etc.

(ii) These events force the people to leave their native places and settle in the new areas.

(i) Availability of better job opportunity.

Answer: Urbanisation refers to the process in which there is an increase in the proportion of population living in towns and cities.

6. List out any four most populous cities in the world.

Name of the cities -  Population in million

1. What are the different types of migration? Explain.

Answer: Migration can be classified in several ways. They are,

(i) Based on the movement associated with administrative limits.

(ii) Based on the willingness of the migrants for migration.

(iii) Based on the duration of stay of migrants in the place of destination.

(i) Based on the movement associated with administrative limits.

❖ The movement of people within a country is known as internal migration.

❖ Further internal migration is classified into four types. They are,

❖ (i) Rural to Urban migration

❖ (iii) Rural to Rural migration and

Migration that occurs across the national boundaries are known as international migration.

(ii) Based on the Willingnes of the migrants for migration :

❖If the migration takes place on persons free will, initiative and desire to live in a better place.

❖If the migration takes place against the will of migrants is known as involuntary migration.

(iii) Based on the duration of stay of migrants in the place of destination :

❖The migrants stay outside only for a short duration before returning to the place of origin.

❖The migrants stay outside atleast for a few years.

❖Usually a group of people migrates from their native places during a particular season and return after end of that season.

❖Transhumance is an another example of seasonal migration.

2. Explain in detail about the various causes of migration.

(i) Ecological or Natural causes of migration:

(a) The causes operate under this category are natural ones. They include volcanic eruption, earthquake, flood, drought etc. These events force the people to leave their native places and settle in the new areas.

(a) Economy is one of the most important causes of human migration from one area to another.

(b) The availability of fertile agricultural land, employment opportunities, development of technology etc. are some of the economic causes that attract the migration.

(a) Socio-cultural causes also play some roles in the process of migration.

(b) For example, women after marriage.

(b) Over population is considered as a push factor and under population to be pull factor in the context of migration.

3. Discuss the problems of urbanisation.

There is a lack of space for housing and a marked reduction in the quality of housing in the urban areas due to increase in population.

(a) Over-crowding leads to unhealthy environment in the urban areas.

(b) It also the cause of many diseases and riots.

(a) No city has round the clock water supply in the world.

(b) Drainage situation is equally bad.

(c) The removal of garbage is a Himalayan task for urban local bodies.

(a) Absence of planned and adequate arrangements for traffic and transport is another problem in urban centres.

(b) The increasing number of two wheelers and cars make the traffic problem worse.

(a) Towns and cities are the major polluters of environment.

(b) Several cities discharge their entire sewage and industrial effluents untreated into the near by rivers. Industries in and around the urban centres pollute the atmosphere with smoke and toxic gases.

On the outline map of the world mark the following places 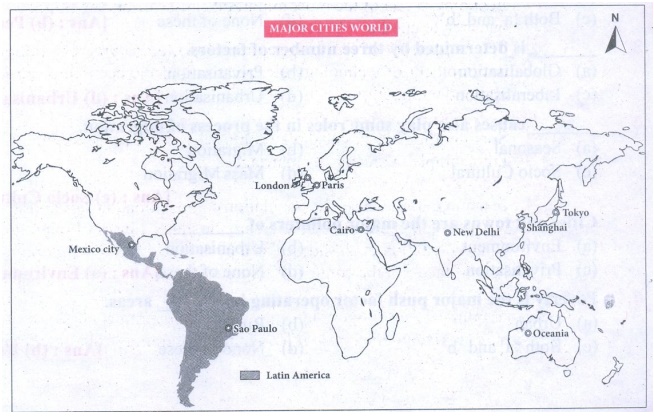 1. List out and analyze the reason for migration of people in your locality.

People migrate for a number of reasons. The reasons and causes for migration would normally fall under these areas :

(i) Environmental: Better climate, calamities and natural disasters are examples of environmental causes or reasons.

(ii) Economic : Moving to find work or moving to follow a particular career path is an example of economic cause or reason.

(iii) Cultural : Religious freedom and education is an example of cultural cause or reason.

(iv) Political : Civil war or escaping from political persecution is an example of political cause.

(v) Social: Moving for a better quality of life or moving closer to a family member or friend is an example of a social cause or reason.

2. Collect the pictures and information regarding the effects of urbanisation and make an album.

Answer: Activity to be done by the students.