There are a number of factors which are responsible for the migration of human population. These factors can be grouped under the heads of favourable and unfavourable factors.

There are a number of factors which are responsible for the migration of human population. These factors can be grouped under the heads of favourable and unfavourable factors.

1. The favourable factors which attract people towards a location are called pull factors.

2. The unfavourable factors which make the people to move out from a location are called push factors.

The various causes which are responsible for human migration is categorized under five groups as follows.

a. Ecological or Natural Causes of Migration

The causes operate under this category are natural ones. They include volcanic eruption, earthquake, flood, drought etc. These events force the people to leave their native places and settle in the new areas. The conditions like the availability of water resources, areas free from hazards, pollution etc., attract the migrants.

b. Economic causes of Migration

Economy is one of the most important causes of human migration from one area to another. Various economic causes determine the level and direction of migration. The availability of fertile agricultural land, employment opportunities, development of technology etc., are some of the economic causes that attract the migration. The mass poverty and unemployment force the people to move out from their native places to the places where the better employment opportunities are available.

Socio- cultural causes also play some roles in the process of migration. Migration of women after marriage and migration associated with pilgrimage are based on the socio-cultural customs. 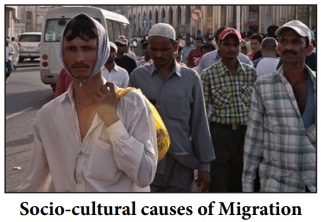 In demographic sense, the population composition like age and sex, over population and under population are the major causes of migration. It is well known fact that adults are more migratory than any other age-groups. Women mostly migrate after their marriage.

Generally over population is considered as a push factor and under population to be pull factor in the context of migration.

Various political causes like colonization, wars, government policies etc. have always been playing important role in human migration from time to time. Wars have been one of the significant causes of migration since ancient time.