Origin and Growth of World Urbanisation

The process of urbanisation in the world has a long history.

Origin and Growth of World Urbanisation

The process of urbanisation in the world has a long history.

Ancient Period: The urban centres started developing during the pre-historic period (before 10000 years). During this period primitive man started domestication of plants and animals. It was the period of development of permanent settlements. The river valley regions of the Egypt, Greece and India gave rise to agrarian communities which eventually formed the urban communities and urban centres. The excess production of food grains was the major reason for urbanisation. Ur and Babylon in Mesopotamia, Thebes and Alexandria in Egypt, Athens in Greece, Harappa and Mohenjodaro in India were noted prehistoric cities of the world.

In ancient period the increase in the number and size of urban centres occurred during the two great colonizing periods of the Greeks and Romans. During the beginning of the 7th century itself many cities were found near the Aegean Sea. During the Greek colonizing period, the expansion of trade promoted the growth of towns and cities.

India, China and Nigeria – together are expected to account for 35 % of the growth in the world’s urban population between 2018 and 2050. India is projected to add 416 million urban dwellers, China 255 million and Nigeria 189 million (World Urbanisation Prospects, 2018, Key facts). 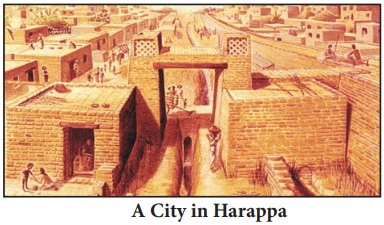 Medieval Period: It refers to the period after the 11th century. During this period, the European countries, increased their overseas trade which played an important role in the revival of European towns and cities after a period of low development. At the end of the thirteenth century, Paris, London, Geneva, Milan and Venice were the important cities found in Europe. 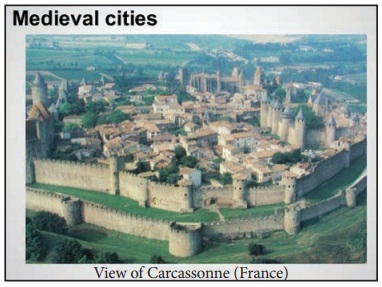 Modern Period: This period starts from 17th century. It marks the third phase of development in urbanisation. The industrial revolution in the19th century accelerated the growth of towns and cities. The Europeans with urban civilization gave birth to a large number of new towns in North America and Soviet Union. The modern means of transport and communication, the development of new trade routes during 19th century had strengthened the trade centres and urban areas. The latest development in urbanisation was noticed in the continent of Africa. Before 1930, Africa had towns only on its coasts but now it has 50 towns with population exceeding 10,00,000. Major cities in Africa are Cairo, Nairobi, Mombasa, Bulawayo, Duala, Abidian, Logos, Accra, Addis Abba, Leopoldville, Luanda, Cape Town, Natal, Pretoria etc. Thus, in modern age, the accelerating urbanisation is resulting in a redistribution of population throughout the world. 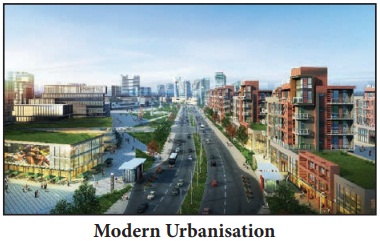 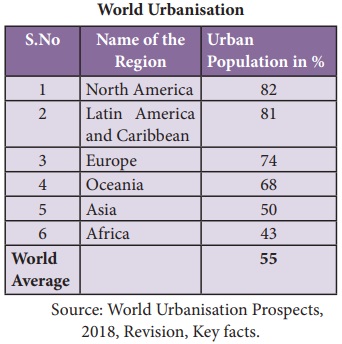 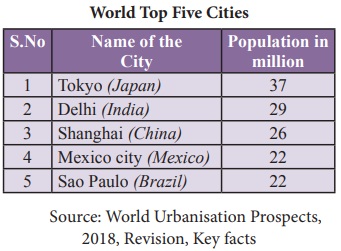