1. Which of the following parts of our body help us in movement?

Choose the correct answer from the options below.

2. Which one of the following organisms lack muscles and skeleton for movement?

(a) Shoulder and arm

(b) Knee and joint

4. Why do underwater divers wear fin-like flippers on their feet ?

(a) To swim easily in water.

(c) To walk on water surface.

(d) To walk over the bottom of the sea (sea bed)

[Answer: (a) To swim easily in water]

5 External ear (pinna )is supported by

6 Cockroach moves with the help of its

7. Which one of the following categories of vertebrae are correctly numbered?

1. Movement of organisms from place to place is called locomotion.

2. Movement refers to change in position of the part of an organisms body.

3. A structure which provides rigid frame work to the body is called skeleton.

5. Appendicular skeleton in human consists of Pelvic and Pectoral girdle.

6. The place where two bones meet is termed as Joint.

7. Smooth muscle is attached to soft parts of the body like blood vessels, iris, bronchi and the skin

3. Pelvic girdle is a part of axial skeleton. [Answer: False]

Correct statement: Pelvic girdle is a part of appendicular skeleton.

6. The flexor and extensor muscle of the arm are antagonistic muscles. [Answer: True]

(i) The skeleton system provides the hard structure or framework to the human body which supports and protects the body.

(ii) It is composed of connective tissues like bones, cartilage, tendons and ligaments.

(i) Skull has 22 bones of which 8 bones are fixed together to form the cranium.

(ii) It is called brain box since it protects the brain.

3. Why our backbone is slightly moveable?

Answer: In the backbone, vertebrae are joined by gliding points, which allow the body to be bent back, front or side wards.

The appendicular skeleton contains the bones in the appendages of the body, as well as the structures that connect the appendages to the axial skeleton. It comprises the shoulder girdle; the arm, wrist, and hand bones; the pelvic girdle; and the leg, ankle, and foot bones.

Answer: A ligament is a band of strong fibrous tissue which connects a bone to a bone.

Answer: Muscles are long bundles of contractile tissue, which has a fixed end (Origin) and movable end which pulls some other part.

1. They are made of elastic tissue.

2. They attach muscle to a bone

They are short bands of tough fibrous connective tissues.

They connect one bone to another

1. Differentiate between the following.

a. Movement and Locomotion.

(a) Movement and Locomotion] 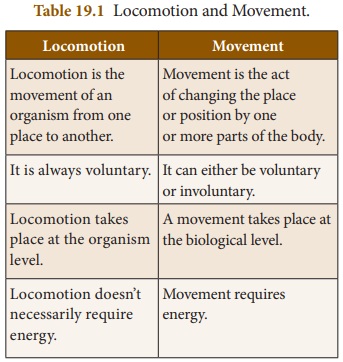 1. Movement is the act of changing the place or position by one or more parts of the body.

2. It can either be voluntary or involuntary.

3. A movement takes place at the biological level.

1. Locomotion is the movement of an organism from one place to another.

2. It is always voluntary.

1. It is the skeleton found inside the body.

2. It originals from mesoderm.

1. It is the skeleton found on the exterior layer of the body.

2. It originals from embryonic ectoderm or mesoderm.

1. It is situated in the shoulder region.

2. It gives articulation to forelimbs.

4. They are comparitively lighter.

1. It is situated in the hip region.

2. It gives articulation to legs or hind limb.

4. They are strong to take upto lot of stress

1. A ball shaped head of one bone articulates with a cup like socket of an adjacent bone.

2. Movement can occur in three planes. This joint allows the greatest range of movement.

1. A cylindrical, protrusion of one bone articulates with a trough-shaped depression of an adjacent bone.

2. Movement is restricted to one plane. This joint allows bending and straightening only.

1. They are striated (Multinucleate muscles and unbranched) muscles.

2. They are attached to bones. Eg.: found in arms, legs

2. They are attached to soft parts of the body like blood vessels, Iris, Skin etc.

3. They are not under our control.

2. What are antagonistic muscles? Give one example.

(i) Muscles often work in pairs which work against each other. These are called antagonistic pairs.

(ii) The muscles in the upper arm control the bending and straightening of the arm.

(iii) The two muscles, the biceps and triceps are working against each other.

(iv) When the biceps contracts the lower arm is raised and the arm bends.

(v) In this position the triceps muscle is relaxed.

(vi) To straighten the arm the reverse happens.

(vii) The triceps contracts straightening the arm, while the biceps relaxes.

3. How is the skeleton of a bird well-suited for flying?

(i) A bird has streamlined body. Its bones are light and strong.

(ii) They are hollow and have air spaces between them.

(iii) The hind limbs of birds are modified as claws, which help them to walk and to perch.

(iv) The breast bones are modified to hold massive flight muscles which help in moving wings up and down.

(v) Birds have special flight muscles and the forelimbs are modified as wings.

(vi) The wings and tail have long feathers, which help in flying. Birds show two types of flight: gliding and flapping.

4. What are the functions of skeleton in human body?

(i) It provides structure and shape to the body.

(ii) It supports and surrounds the internal organs of the body.

(iii) Calcium and phosphorus, the two minerals that the body needs for important regulatory functions, are stored inside the bones.

(iv) Red blood cells are produced in the bone marrow.

1. Name the different types of joints? Give one example for each type.

Gliding : Spine (between the bony processes of the vertebrae)

(iii) The lower jaw is the only movable bone of the skull.

(i) It is called the backbone and runs of the back of the body.

(ii) It is made of 33 individual bones called vertebrae as follows :

(iii) The hollow tube of the vertebral column contains the spinal cord.

(iv) Vertebrae are joined by gliding points which allow the body to be bent back, front or sidewards.

(i) It protects the spinal cord

(ii) It supports the head

(iii) It serves as an attachment for ribs 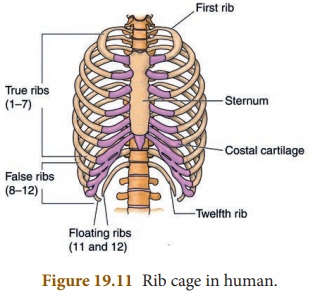 (i) It is a cone shaped structure in the chest region and made up of 12 pairs of ribs.

(ii) The ribs attached to the vertebral column at the back and the breast bone in the front.

❖ 2 pairs are called free floating ribs and are free in the front.

(iv) Rib cage can contract and expand during breathing.

(v) It protects the lungs, hearts and a part to the liver.

There are three types of movements:

(i) Amoeboid movement : It is brought about by pseudopodia which are appendages which move with movement of protoplasm within a cell.

(ii) Ciliary movement: This movement is brought about by appendages called as cilia which are the hair-like extensions of the epithelium. Both these kinds of movements are seen with cells of the lymphatic system.

(iii) Muscular movement : It is a more complex movement which is brought about by the musculoskeletal system. This type of movement is seen in the higher vertebrates. Eg. : Human beings.

The movements brought about by the musculoskeletal system, comprising of the joints, skeleton and types of muscles.

Some of the movements in body parts of human are:

(a) Movement of eyelids.

(b) Movement of the heart muscles.

(c) Movement of teeth and jaw.

(d) Movement of arms and legs.

4. What is a streamlined body? How does it help in the movement of animals that fly or swim in water?

(i) A streamlined body is one which is pointed at the ends and broad in the middle. When such a body travels through a fluid or gaseous medium it exhibits minimum friction or resistance. A body shape which is streamlined helps cut against the friction created by the medium around the moving body.

(ii) Streamlined body lowers the friction drag between a fluid, air or water and an object moving trough that fluid. Drag is a force that slows down motion. Streamlining reduces the surface area of the moving object.

(iii) Streamlining reduces friction of movement to a minimum thus decreasing overall drag. Fishes can save energy while swimming because of the streamlined body. Similarly birds can fly easily since streamlined body reduces resistance to air.

5. Write a short note on different types of muscles.

Answer: Muscles found in higher vertebrates are of three types:

(i) Striated or skeletal muscles or voluntary muscles. 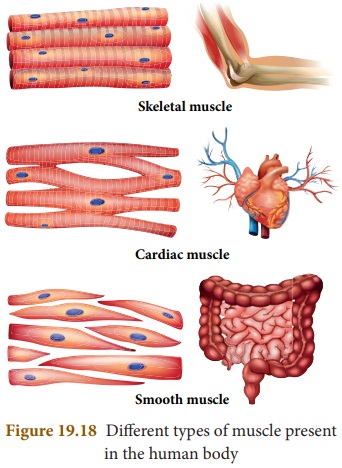 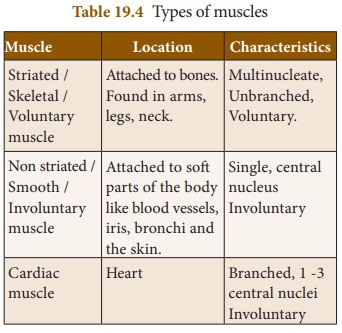