Movement is one of the significant features of living beings. This is the basic mechanism used in majority of the vertebrates including human.

Movement is one of the significant features of living beings. This is the basic mechanism used in majority of the vertebrates including human. Animals exhibit a wide range of movements. In this part let us study about movements in different animals.

The body of earthworm is made up of many rings joined end to end. It has muscles which help to extend and shorten the body. Under its body it has large number of bristles called setae which are connected with muscles. These bristles help to get grip on the ground. During movement, the earthworm first extends the front part of the body, keeping the rear portion fixed to the ground.

Observe an earthworm moving on soil in the garden. Gently lift it and place it on a piece of blotting or filter paper. Observe its movement now. In which of the above two surfaces do you find that the earthworm is able to move easily? 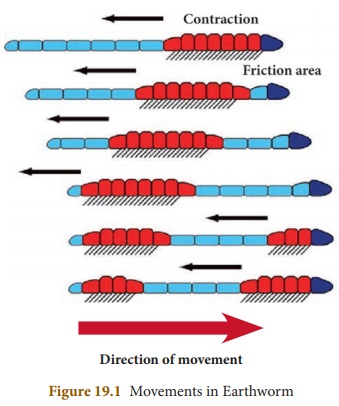 Then it fixes the front end and releases the rear end. It then shortens the body and pulls the rear end forward. This makes it move forward by small distances. Repeating such muscle contraction and relaxation the earthworm can move through soil. A slimy substance secreted by its body helps this movement.

A cockroach has three pairs of jointed legs, which help it to walk, run and climb. It also has two pairs of wings for flying. Large and strong muscles help in the movement of legs. The body is covered by chitin, a light protective material. Chitin is shed regularly so that the body can grow. 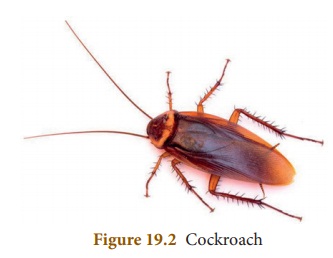 Observe a cockroach and identify its legs and wings. Try to know more about other parts of cockroach with the help of your teacher.

Birds can walk on the ground and fly as well. Some birds can also swim in the water. A bird has streamlined body. Its bones are light and strong. They are hollow and have air spaces between them. The lower portion of limbs are modified as claws, which help them to walk and to perch. The breast bones are modified to hold massive flight muscles which help in moving wings up and down. Birds have special flight muscles and the forelimbs are modified as wings.The wings and tail have long feathers, which help in flying. Birds show two types of flight: gliding and flapping.

During gliding the bird has its wings and tail spread out. In this movement the bird uses air currents for going up and down. Flapping is an active flight. The bird beats the air by flapping its wings. They use flight feathers for this purpose. 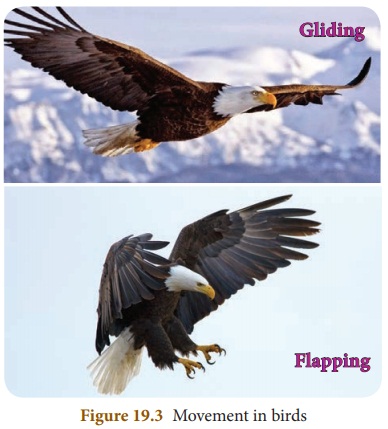 Observe a hen and crow. How do they move? Write about the similarities and dissimilarities found among them, in your note book.

The body of snake consists of a large number of vertebrae. The adjoining vertebrae, ribs and skin are inter-connected with slender body muscles. When the snake moves, it makes many loops on its sides. The forward push of the loops against the surface makes the snake move forward. Movement of snake is called slithering movement. Many snakes can swim in water also. 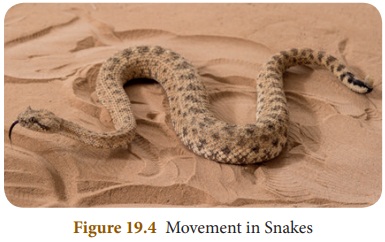 Since snakes do not have legs, they use their muscles and their scales to move.

Fish swims with the help of fins. They have two paired fins and an unpaired fin. The body of a fish is streamlined to reduce friction while moving in water. They have strong muscles, which help in swimming. When a fish swims its front part curves to one side and the tail part stays in the opposite direction. In the next move, the front part curves to the opposite side and the tail part also changes its position to another side. The caudal or tail fin helps in changing direction.

Fish have streamlined body structure which helps them to move smoothly with the flow of water. Muscles and fins on the body and the tail help to keep the balance. 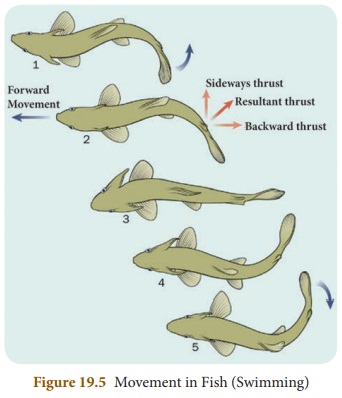 Make a paper boat; put it in water and push it with narrow end pointing forward. Now hold the boat side way and push it into water from the broad side. What did you observe? In which process was it easy to move the boat? Have you noticed that the shape of a boat is somewhat like a fish?

Humans can move some parts of their body in different directions; however some body parts can be moved only in one direction. Our body is made up of a frame work of bones called skeleton which helps in the movement of the body. Some of the movements in body parts of human are:

a. Movement of eyelids.

b. Movement of the heart muscles.

c. Movement of teeth and jaw.

d. Movement of arms and legs.

Movement of some organs happens because of the combined action of bones and muscles. In such cases, movement is possible along a point where two or more bones meet.

•  Cheetah can run 76 kilometrer per hour.

•  Hippopotamus can run faster than a man.

•  Cockroach is the fastest animal with 6 legs covering a metre per second.

•  The fastest mammal, the Dolphin can swim upto 35 miles per hours.