After we’ve defined a question, chosen a sample, and collected the data—what’s next? To address this question, let’s press on with our earlier example.

After we’ve defined a question, chosen a sample, and collected the data—what’s next? To address this question, let’s press on with our earlier example. Imagine that some researchers have measured the aggressiveness of a group of boys playing together and a group of girls playing together, so they now have an “aggression score” for each person. This leaves the researchers with two lists of numbers, as shown in Table 1.1. (The data in the table are fic-tional, but we’ll describe the real outcome of this sort of comparison before we’re done.) In most studies, the researchers’ next step would involve some sort of statistical analysis of the data. Broadly speaking, this analysis will have two parts: First, the researchers will rely on descriptive statistics to summarize the data. Second, the researchers will use inferential statistics to ask how confident they can be in drawing conclusions based on their sample. This is, of course, usually the step that tells the researchers whether the data support their hypothesis or not. 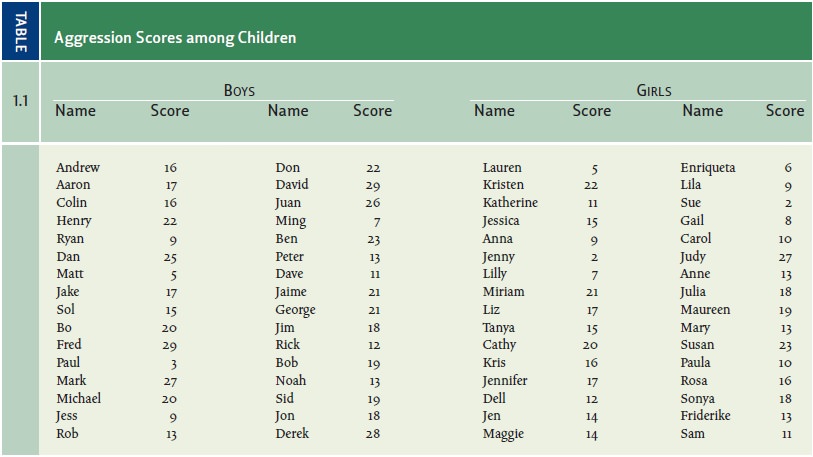 In Table 1.1, it’s difficult to see any pattern at all. Some of the boys’ numbers are high, and some are lower; the same is true for the girls. With the data in this format, it’s hard to see anything beyond these general points. The pattern becomes obvious, however, if we summarize these data in terms of a frequency distribution (Table 1.2)—a table that lists how many scores fall into each of the designated categories. The pattern is clearer still if we graph the frequency distributions (Figure 1.9). Now we  most common scores (in these fictional data) are between 16.1 and 20 for the boys andbetween 12.1 and 16.0 for the girls. As we move further and furtherfrom  these  central  categories  (looking  either  at  higher  scores  orlower), the number of people at each level of aggression drops. 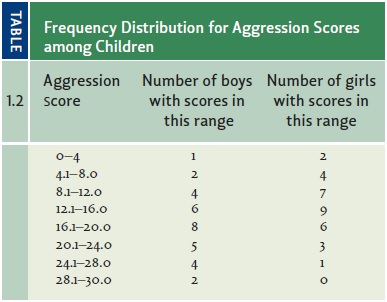 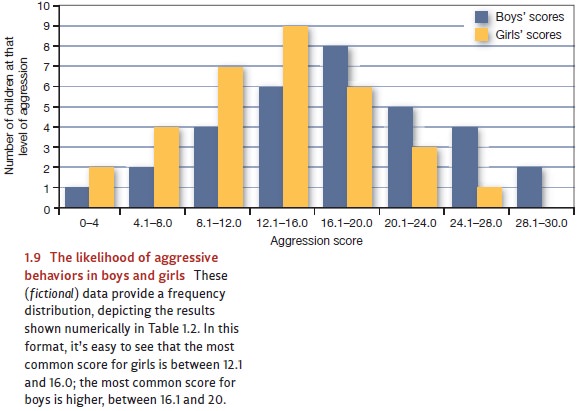