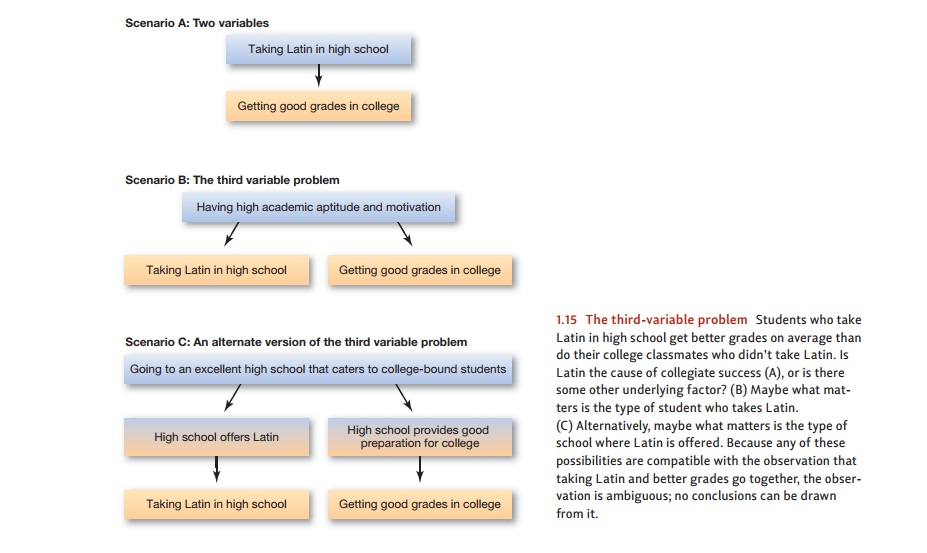 We’ve now explored some fundamental tools for psychology research—statistical tools, principles that govern the definition of variables, and procedures for selecting a sample. But what can we do with these tools? How do we go about setting up a psy-chological study? The answer varies considerably, and psychological studies come in many different forms. In some cases, psychologists observe conditions as they already exist in the world. Our main example so far—comparing boys and girls in their level of aggression—has been in this category. This sort of study is referred to as a quasi-experiment—a comparison of two or more groups that we did not create; the groups already existed in the world quite independent of our study.

In other cases, we do correlational studies—we collect multiple bits of information about each research participant and then examine the relationships among these bits of information. For example, how important is it, as we walk through life, to have good self-control—an ability to rein in our impulses and govern our own thoughts and emo-tions? One study addressed this broad question by asking people to evaluate various aspects of their own self-control. Specifically, the participants had to decide how well certain statements applied to them: “I am good at resisting temptation,” “I am always on time,” and so on. The investigators also collected other pieces of information about these same individuals and then looked at the relationships among these various meas-ures. The data indicated that higher levels of self-control were associated with better grades in school, fewer symptoms of mental disorder, less binge eating, and better social relationships (Tangney, Baumeister, & Boone, 2004). All in all, the study indi-cated the advantages of self-control and, more broadly, illustrated the sorts of things we can learn from a correlational study.

Quasi-experiments and correlational studies are different in important ways (e.g., they usually require different types of statistical analysis). They are alike, however, because they both involve data from a natural situation, one that the researcher did not create. On this basis, we can think of them both as types of observational studies—stud-ies that observe the world as it is. In a different type of research, though, psychologists do create (or alter) situations in order to study them. If, for example, we wanted to ask whether stern warnings about aggression caused a decrease in bad behaviors, we could give the stern warning to some children and not to others and then see what happens. In this case, we’re not studying a previously existing situation; we are adding our own manipulation—the warnings—to see what this does to the data. Studies of this sort, involving a change or manipulation, are called experiments.

Psychologists often want to study the effects of factors they cannot control. The inde-pendent variable in our aggression example—sex—is a good illustration. If we want to learn about the effect of sex on aggression, therefore, we need to do an observational study, not an experiment.

Other illustrations are easy to find. For example, some authors have proposed that birth order is a powerful influence on personality and that compared to later-born chil-dren, firstborn children are more likely to identify with their parents and less likely to rebel. To test this claim, we’ll once again need to study the world as it is rather than doing an experiment. Plainly, a wide range of issues call for the use of observational studies; and these studies, when properly designed, are an important source of evidence for us.

But let’s be clear that observational studies have an important limitation—their ability to tell us about cause and effect. Here’s an example: Suppose a researcher hypothesizes that clinical depression leads to a certain style of thinking in which the person con-stantly mulls over unhappy occasions. To verify this hypothesis, the researcher tests two groups—people who are depressed and people who are not—and has the participants in each group fill out questionnaires designed to assess their thought habits. Let’s suppose further that the researcher finds a difference between the groups—the participants suf-fering from depression are more likely to ruminate on their life difficulties.

How should we think about this result? It’s possible that depression encourages the habit of rumination; that would explain why rumination is more likely among people with depression. But, it’s also possible that cause and effect are the other way around— and so a tendency toward mulling over life’s problems is actually causing the depres-sion. That interpretation also fits with the result; but it would have very different implications for what we might conclude about the roots of depression as well as how we might try to help people with depression.

In observational studies, researchers are often uncertain about which variable is the cause and which is the effect. Worse, sometimes there’s another possibility to consider when interpreting observational data: Perhaps a third factor, different from the two cor-related variables, is causing both. This is the third-variable problem (Figure 1.15). For example, a number of studies have suggested that students who take Latin in high school often get above-average grades in college, and there’s an obvious cause-and-effect interpretation for these data: Background in Latin gives students insight into the roots of many modern words, improving their vocabulary and thus aiding college performance (Figure 1.15A). 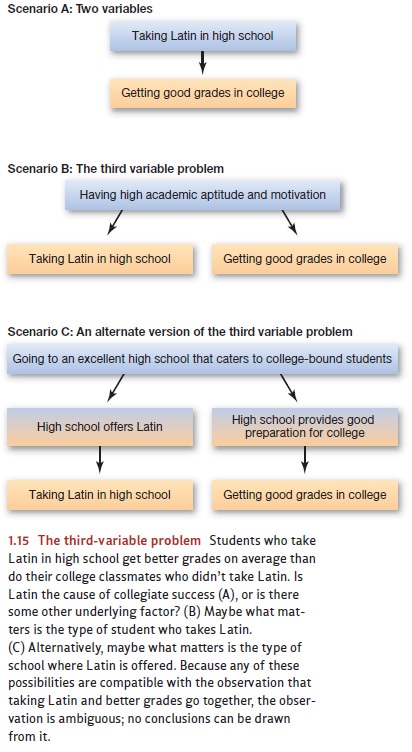 This explanation of the data certainly seems plausible—but it may not be right, and there are surely other ways to think about the evidence. For example, what sorts of stu-dents typically choose to take Latin in high school? In many cases, they’re students who are academically ambitious, motivated, and able. And, of course, students with these same traits are likely to do well in college. Thus, these students have distinctive characteristics—motivation and aptitude—that become the “third variable,” which leads to taking Latin and to getting better grades in college (Figure 1.15B). On this basis, taking Latin would be associated with good college grades, but not because one caused the other. Instead, both effects might be the products of the same underlying cause. (Figure 1.15C illustrates yet another possibility—and a different notion of what the third variable might be in this example.)

These complications—identifying which factor is the cause and which is the effect, and dealing with the third-variable problem—often make it difficult to interpret obser-vational data. Researchers often summarize this difficulty with a simple slogan: Correlation does not imply causation. Of course, sometimes correlations do reflect causal-ity: Smoking cigarettes is correlated with, and is a cause of, emphysema, lung cancer, and heart disease. Being depressed is correlated with, and is actually a cause of, sleep disruption. But correlations often do not imply causes: The number of ashtrays an indi-vidual owns is correlated with poor health, but not because owning ashtrays is haz-ardous. Similarly, there’s a correlation between how many tomatoes a family eats in a month and how late the children in the family go to bed—but not because eating toma-toes keeps the kids awake. Instead, tomato eating and late bedtimes are correlated because they’re both more likely to occur in the summer.

How can we address these problems? Sometimes we can disentangle cause and effect simply by collecting more observational data. For example, in the study of depression and thinking style, we might be able to determine which of these elements was on the scene first: Were the people depressed before they started to ruminate? Or were they ruminating before they became depressed? Here, we’re exploiting the simple logic that the causes must be in place before the effects. In other cases, though, it’s just not pos-sible to draw conclusions about cause and effect from observational data, and so we need to turn to a different type of research—one that relies on experiments.