Properties of the Bacteria - Staphylococcus aureus

They are Gram-positive cocci, measuring around 1mm in diameter.

The cocci are typically arranged in irregular grape-like clusters. This appearance is due to incomplete separation of daughter cells during successive divisions of bacteria, which takes place in perpendicular planes. The grape-like clustering is seen when the bacteria are grown in solid media, but usually short chains are seen when grown in liquid media.

In smears taken from pus, the cocci are present either singly or in pairs, in clusters, or in short chains of three or four cells.

Staphylococci are aerobes and facultative anaerobes but can grow in the absence of oxygen also. They grow at a tempera-ture range of 10–42°C (optimum temperature 37°C) and a pH range of 7.4–7.6 (optimum pH 7).

Culture on solid media: Staphylococci can grow on a widerange of media including Mueller–Hinton agar, nutrient agar, blood agar, and MacConkey agar. Primary isolation can be made on nutrient agar and blood agar. 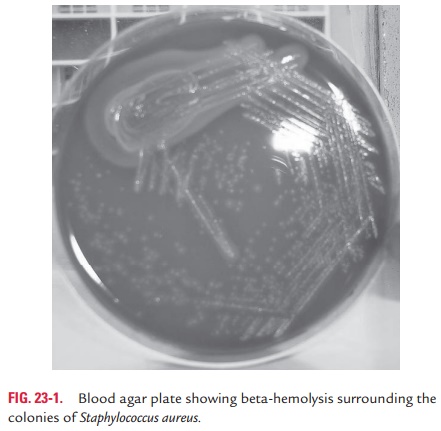 Hemolysis is weak on horse blood agar. Human blood is not used, as it may contain antibiotics or other inhibi-tors. Other species ofStaphylococcus do not produce hemolysis.

Culture in liquid media: S. aureusproduces turbidity in liquidmedia and there is no production of pigment.

·           It is coagulase positive. The production of coagulase is used as a test to differentiate S. aureus from S. epidermidis and other CONS.

·           It is phosphatase positive. Phosphatase production can also be used to differentiate S. aureus from S. epidermidis, as the latter either does not produce or has very weak phosphatase activity.

·           It is catalase positive. It produces enzyme catalase (unlike Streptococcus), which degrades H2O2into nascent oxygen andwater.

·           S. aureus ferments mannitol, sucrose, maltose, and trehaloseunder aerobic conditions, with the production of acid but no gas. Fermentation of mannitol is of diagnostic impor-tance, because most strains of S. aureus ferment manni-tol while those of S. epidermidis and S. saprophyticus do not ferment mannitol.

Susceptibility to physical and chemical agents: The cocciwithstand moist heat at 60°C for 30 minutes but are killed after 30 minutes. They are also killed rapidly by disinfectants, such as phenol, chlorhexidine, and hexachlorophene. The cocci are very sensitive to aniline dyes, such as crystal violet. The dye at a concentration of 1:500,000 inhibits the growth of the cocci on blood agar medium but permits the growth of streptococci.