Coagulase-negative staphylococci (CONS) are the normal flora of the skin. CONS are opportunistic bacteria.

Coagulase-negative staphylococci (CONS) are the normal flora of the skin. CONS are opportunistic bacteria. They cause infec-tions in debilitated or immunocompromised patients and in patients fitted with urinary catheters, cardiac valves, pacemak-ers, and artificial joints.

·           They form white nonpigmented colonies, morphologically similar to those of S. aureus.

·            They are differentiated from S. aureus by their failure to coag-ulate the plasma due to the absence of the enzyme coagulase.

S. epidermidis forms white colonies on blood agar. It is catalasepositive, coagulase negative, and does not ferment mannitol. It tolerates salt, survives drying, and is highly antibiotic resistant. It is a normal skin commensal. Carriage rate is as high as 100%. This bacterium is transmitted by self-inoculation or by contact with infected patients and hospital personnel.

Ability to produce slime is an important virulence factor of the bacterium. S. epidermidis causes infection by adhering itself to the surface of the intravenous plastic catheters and pros-thetic devices. The adherence is believed to be facilitated by polysaccharide glycocalyx known as slime, produced in large quantities by the bacteria. Slime also inhibits the action of lym-phocytes and neutrophils. S. epidermidis is an important agent of hospital-acquired infection. It causes:

·           infection in compromised hosts, such as neutropenic patients, particularly in association with intravenous cath-eters and other prosthetic devices, such as heart valves.

Vancomycin is the drug of choice for treatment of infection caused by S. epidermidis.

S. saprophyticus forms white colonies on blood agar. It is catalasepositive, coagulase negative, and does not ferment mannitol. It normally inhabits the skin and genital mucosa. The bacterium causes: 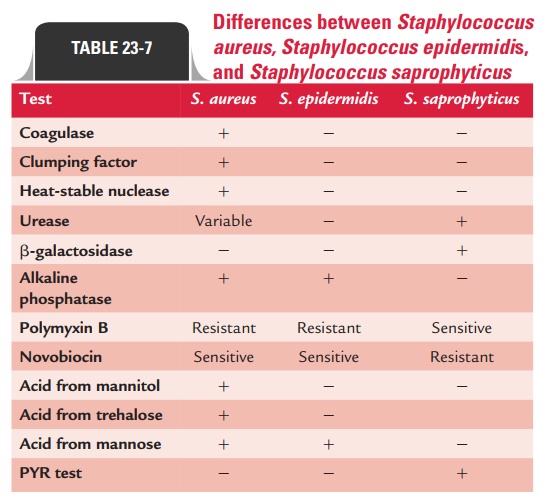 ·           Urinary tract infection by endogenous spread in colonized women. It adheres to the epithelial cells lin-ing the urogenital tract. It causes dysuria, pyuria, and hematuria.

Urinary tract infection caused by S. saprophyticus can be treated with quinolones (such as norfloxacin) or with trimethoprim–sulfamethoxazole.

There are many other coagulase-negative staphylococci that have been reported recently to cause human infections. These include the following: