Staphylococcal infections are found throughout the world. Nearly one-third of the adult population is asymptomatic car-rier of staphylococci. Hospital infections caused by S. aureus are worldwide in distribution.

Staphylococcal infections are found throughout the world. Nearly one-third of the adult population is asymptomatic car-rier of staphylococci. Hospital infections caused by S. aureus are worldwide in distribution.

Staphylococci are primary pathogens of humans and animals. They are present as commensals on skin, in the glands of the skin, and on mucous membranes. The cocci are commonly found in the intertriginous skin folds, perineum, axillae, and vagina. Approximately, 35–50% of normal adults carry S. aureus in the anterior nares, 10% in the perineum, and 5–10% in the vagina.

Human cases and carriers are the important reservoir of infection.

·           Human cases of cutaneous and respiratory infections shed large numbers of staphylococci into the environment for a prolonged period of time. Staphylococci colonize the skin very early in life (in neonates on the umbilical stump).

·           Staphylococci shed by the patients and carriers contaminate handkerchiefs, bed linens, blankets, and other inanimate fomites and persist in them for weeks.

·           S. aureus found in the nose and sometimes on the skin, espe-cially in hospital staff and patients is the main source of infection in hospitals.

·           Domestic animals, such as cows, can also be reservoirs of staphylococcal infection. 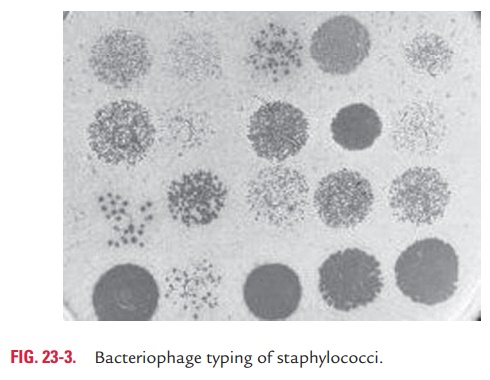 strain of S. aureus to be typed is inoculated on a nutrient agar plate to produce a lawn culture. After drying the plate, various phages at their routine test dilution (RTD) are applied over marked squares on plate. Such plates are then incubated over-night at 30°C and observed for the presence or absence of lysis of the colonies by the phages. 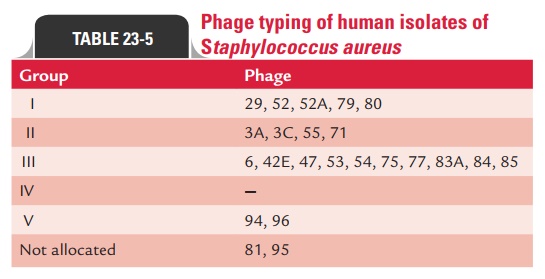 The national reference centre for staphylococcal phage typ-ing in India is located in the Department of Microbiology, Maulana Azad Medical College, New Delhi.

S. aureus has been classified into six biotypes (A, B, C, D, E,and F). Most human pathogenic strains belong to biotype A. Other typing methods include (a) plasmid profile, (b) DNA fingerprinting, (c) ribotyping, and (d) PCR-based analysis of genetic pleomorphism and (e) serotyping.