S. aureus causes disease by multiplying in tissues and causinginflammation, and also by liberating toxin.

S. aureus causes disease by multiplying in tissues and causinginflammation, and also by liberating toxin. 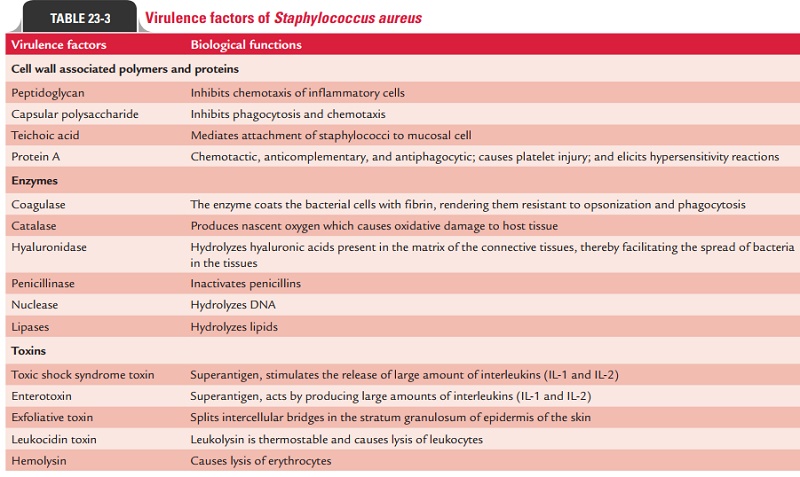 These include capsular polysaccharide, protein A, peptido-glycan, and teichoic acid that contribute to pathogenesis of staphylococcal diseases.

Capsular polysaccharide: Few strains ofS. aureusarecapsulated. These strains are more virulent than the noncapsulated ones.

·           The capsule protects the bacteria from phagocytosis.

·           The capsule also facilitates adherence of the cocci to host cells and to prosthetic implants.

Protein A: Protein A is an important virulence factorsince it has non-specific interaction with Fc portion of the immunoglobulin G (IgG) leaving the Fab portions free to combine with specific antigen.

Peptidoglycan: It activates the complement, stimulatesproduction of the antibodies, and inhibits chemotaxis by inflammatory cells.

The enzymes include (a) coagulase, (b) catalase, (c) hyaluroni-dase, (d) penicillinase, and (e) other enzymes.

1.   Free coagulase: Free coagulase is a heat-labile and filter-able enzyme. It has eight antigenic types (A, B, C, D, E, F, G, and H). Antigenic type A is produced by most human S. aureus strains. The enzyme coagulase in association with coagulase-reacting factor (CRF) present in plasma converts fibrinogen to fibrin. In the absence of CRF, coagulase cannot bring about clotting like in case of the guinea pig plasma. This fibrin coats the bacterial cells, rendering them resistant to opsonization and phagocytosis and hence making bacteria more virulent. All coagulase-producing staphylococci are, by definition, S. aureus. Coagulase production is demonstrated by tube coagulase test, which is an important test for the identification of S. aureus.

Differences between coagulase and clumping factors are sum-marized in Table 23-4. 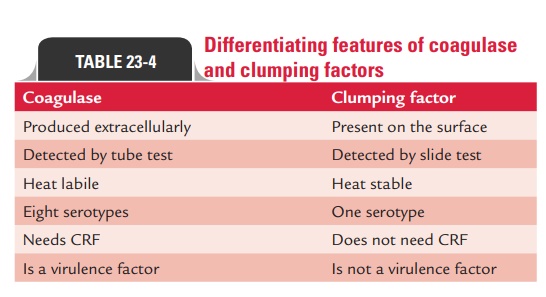 Catalase: The enzyme catalase reduces H2O2to nascentoxygen and water. This nascent oxygen causes oxidative damage of host tissue. This enzyme is produced after phagocytosis or during metabolism of the bacteria. All strains of staphylococci produce catalase unlike streptococci.

Hyaluronidase: The enzyme hyaluronidase hydrolyzes the acidicmucopolysaccharides present in the matrix of the connective tissues, thereby facilitating the spread of bacteria in tissues.

Penicillinase: More than 90% ofS. aureusproduce enzymepenicillinase. The enzyme inactivates penicillin group of antibiotics, hence is responsible for widespread occurrence of penicillin-resistant staphylococci. The gene for this enzyme is acquired through plasmids.

Other enzymes: These include phosphatase, deoxyribo-nucleases, nucleases, proteases, phospholipase, and lipases.

·           TSST is a superantigen and hence a potent stimulant of T lymphocytes, resulting in release of large amount of inter-leukins (IL-1 and IL-2) and tumor necrosis factor, ultimately manifesting in TSS.

Enterotoxin: Enterotoxin is a heat-stable protein, capable ofresisting boiling for about 30 minutes. It is also gut-enzyme resistant. The toxin is produced by nearly one-third of all the strains of S. aureus, and these strains belong to bacterio-phage group III (6/47).

·           The toxins are superantigens and act by producing large amounts of interleukins, IL-1 and IL-2.

·           The enterotoxins are responsible for clinical conditions like staphylococcal food poisoning and pseudomembranous enterocolitis postantibiotic therapy.

·           The toxin breaks intercellular bridges in the stratum gran-ulosum of epidermis and causes its separation from the underlying tissue, resulting in a blistering and exfoliating disease of the skin.

·           The alpha-lysin is the most important leukocidin. It causes marked necrosis of the skin and hemolysis by damaging the cell membrane, leading to release of low-molecular-weight substances from the damaged cells.

·           PV–leukocidins are six in number, each consisting of two components. The molecular weight is around 32 kDa. These toxins cause death of human leukocytes and macrophages without causing any lysis.

·           Leukolysin is thermostable and causes lysis of leukocytes and necrosis of tissues in vivo.

·        Alpha-hemolysin is a protein with a molecular weight of 33 kDa. It has lethal effects on a wide variety of cell types and lyses erythrocytes of several animal species.

·           Beta-hemolysin is a sphingomyelinase that is active on a variety of cells. It is a protein with a molecular weight of 35 kDa. It is a hot–cold hemolysin; i.e., its hemolytic proper-ties are increased by exposure of the RBCs to cold temperature.

·           Delta-hemolysin is a protein with a molecular weight of 8 kDa. It acts primarily as a surfactant.

·        Gamma-hemolysin actually consists of three proteins. The three delta-hemolysin proteins interact with one of the two PV–leukocidin proteins.

S. aureus are pyogenic bacteria that cause localized lesionsin contrast to streptococci that are spreading in nature. Staphylococci adhere to the damaged skin, mucosa, or tis-sue surfaces. At these sites, they evade defense mechanisms of the host, colonize, and cause tissue damage. They produce disease by:

S. aureus infection does not cause any life-long immunity. Itcauses repeated infections in a susceptible host.