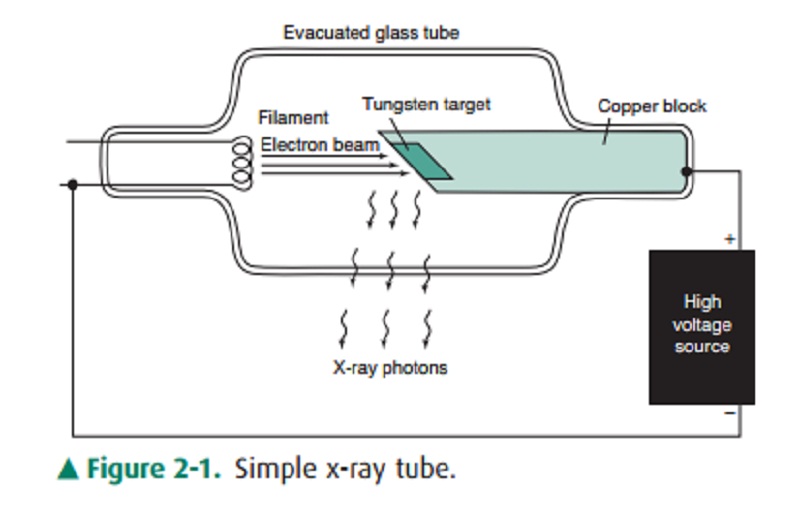 Electromagnetic radiation may be produced in a variety of ways. One method is the acceleration or deceleration of electrons.

Electromagnetic radiation may be produced in a variety of ways. One method is the acceleration or deceleration of elec-trons. For example, a radio transmitter is merely a source of high-frequency alternating current that causes electrons in an antenna wire to which it is connected to oscillate (acceler-ate and decelerate), thereby producing radio waves (photons) at the transmitter frequency. In an x-ray tube, electrons boiled off from a hot filament (Figure 2-1) are accelerated toward a tungsten anode by a high voltage on the order of 100 kilovolts (kV). Just before hitting the anode, the electrons will have a kinetic energy in kiloelectron volts equal in mag-nitude to the kilovoltage (eg, if the voltage across the x-ray tube is 100 kV, the electron energy is 100 keV). When the electrons smash into the tungsten anode, most of them hit other elec-trons, and their energy is dissipated in the form of heat. In fact, the anode may become white-hot during an x-ray exposure, which is one reason for choosing an anode made of tungsten, with a very high melting point. The electrons penetrate the anode to a depth less than 0.1 mm. 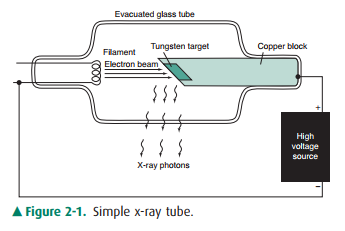 A small fraction of the electrons, however, may have a close encounter with a tungsten nucleus, which, because of its large positive charge, exerts a large attractive force on the electron, giving the electron a hard jerk (acceleration) of suf-ficient magnitude to produce an x-ray photon. The energy of the x-ray photon, which is derived from the energy of the in-cident electron, depends on the magnitude of the acceleration imparted to the electron. The magnitude of the acceleration, in turn, depends on how closely the electron passes by the nucleus. If one imagines a target consisting of a series of con-centric circles, such as a dart board, with the bull’s-eye cen-tered on the nucleus, more electrons clearly will impinge at larger distances than in the bull’s-eye; hence, a variety of x-ray photon energies will be produced at a given tube voltage (kV) up to a maximum equal to the tube voltage (a hit in the bull’s-eye), where the electron gives up all its energy to the x-ray photon. Increasing the voltage will shift the x-ray pho-ton spectrum to higher energies, and higher-energy photons are more penetrating. The radiation produced in this manner is called Bremsstrahlung (braking radiation) and represents only about 1% of the electron energy dumped into the anode by the electron beam; the other 99% goes into heat.

The electron current from filament to anode in the x-ray tube is called the mA, because it is measured in milliamperes. The mA is simply a measure of the number of electrons per second making the trip across the x-ray tube from filament to anode. The rate of x-ray production (number of x-rays pro-duced per second) is proportional to the product of mil-liamperage and kilovoltage squared. The quantity of x-rays produced in an exposure of duration s (in seconds) is pro-portional to the product of mA and time and is called the mAs. The quantity of x-rays at a given point is generally measured in terms of the amount of ionization per cubic centimeter of air produced at that point by the x-rays and is measured in roentgens (R) or in coulombs per kilogram ofair. This quantity is called exposure, and 1 R of exposure re-sults in 2 109 ionizations per cubic centimeter of air.

The electron beam is made to impinge on a small area on the anode of the order of 1 mm in diameter in order to ap-proximate a point source of x-rays. Because a radiograph is a shadow picture, the smaller the focal spot, the sharper the image. By analogy, a shadow picture on the wall (such as a rabbit made with one’s hand) will be much sharper if a point source of light such as a candle is used rather than an ex-tended light source such as a fluorescent tube. The penumbra (or unsharpness) of the shadow will depend not only on the source size, but also on the magnification, as can be illus-trated by making a shadow of one’s hand on a piece of paper using a small light source such as a single light bulb. The closer you bring your hand to the paper (the smaller the mag-nification), the sharper the edges of the shadow. Similarly, magnification of the x-ray image produced by the point source is less, the closer the patient is to the film and the far-ther the source is from the film. The magnification factor (M) is defined as the ratio of image size to object size and is equal to the ratio of the focal-to-film distance divided by the focal-to-object distance (M>=1, and M 1 means no magnifica-tion is produced; ie, either the object is right against the film, or the focal spot is infinitely far away). The penumbra, blur-ring, or unsharpness ( ∆x) produced on an otherwise perfectly sharp edge of an object and due to the finite focal spot size of dimension a is expressed by the equation

Unfortunately, the smaller the focal spot, the more likely it is that the anode will melt. The power (energy/per sec-ond) dumped into the anode is equal to the product of the kilovoltage and milliamperage; ie, at 100 kV and 500 mA, 50,000 watts of heat energy is deposited into an area on the order of a few square millimeters (imagine a 50,000-watt light bulb to get an idea of the heat generated).