The biological effects of x-irradiation are due to the recoiling electrons produced by the absorption or scattering of the inci-dent x-rays, these electrons having enough kinetic energy to ionize hundreds of atoms along their trajectory.

The biological effects of x-irradiation are due to the recoiling electrons produced by the absorption or scattering of the inci-dent x-rays, these electrons having enough kinetic energy to ionize hundreds of atoms along their trajectory. These elec-trons may damage DNA molecules directly or produce free radicals that can cause chemical damage to genetic material; either effect may result in cell death or mutation. Magnetic res-onance imaging and ultrasonic imaging do not utilize ioniz-ing radiation, and there is no significant evidence that any biologic damage results from these imaging modalities.

Effect on the Patient

The primary risk to patients undergoing medical x-ray exam-inations is radiation-induced cancer, primarily leukemia, thyroid, breast, lung, and gastrointestinal cancer. These rela-tive risks are considered to be related to radiation dose and effective dose, which is essentially the exposure to various critical organs multiplied by an organ-weighing factor (the units of radiation dose or exposure: a rem, a rad, and a roent-gen are essentially equivalent for x- and -ray irradiation). Table 2-1 lists representative diagnostic procedures and asso-ciated typical effective dose in millirem, with the dose trans-lated into relative increase in cancer risk per million persons, as well as the time required to receive the equivalent effective dose from natural background radiation. For example, if 1 million persons received lumbar spine examinations, there would be 51 additional (randomly occurring) cases of cancer above that occurring naturally in this population over their lifetime. In addition, it would take 155 days to receive a dose of radiation from natural background radiation equivalent to one lumbar spine radiograph. 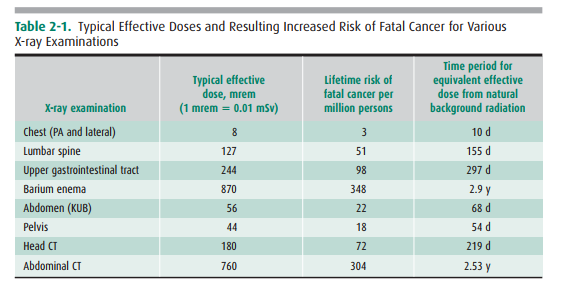 According to a recent report by the National Council on Radiation Protection and Measurements (NCRP), Ameri-cans were exposed to greater than seven times the ionizing ra-diation in 2006, as compared to the early 1980s. This increase was primarily due to the increased utilization of computed tomography, which, when combined with nuclear medicine imaging, constituted 36% of total radiation exposure and 75% of medical-associated radiation exposure received by the US population. Indeed, the NCRP estimated that 67 mil-lion CT scans were performed in the United States in 2006. Such markedly increased utilization and associated increase in radiation exposure raise concern about subsequent long-term risk of malignancy. Future research evaluating the diag-nostic benefit of imaging compared to the exposure risk to the population will undoubtedly shape the environment and context of medical imaging over the next decade.

The fetus consists of rapidly dividing cells; hence, it is more sensitive to radiation, particularly in the first trimester. The principal risks to the fetus from in utero irradiation are can-cer induction, malformation (eg, small head size), and men-tal retardation.

Every fertile female patient should be asked if she might be pregnant; if so, the relative risks of the diagnostic x-ray procedure versus the expected benefit should be weighed be-fore the procedure is performed, or alternate imaging pro-cedures such as MR imaging or ultrasound should be considered. It should be noted, however, that the added risk from diagnostic x-ray procedures is generally negligible com-pared to the normal risks of pregnancy, because fetal doses are typically below 5 rad in these procedures.

The National Council on Radiation Protection (NCRP) in its report NCRP No. 54 states:

The risk (to the fetus) is considered to be negligible at 5 rad or less when compared to the other risks of preg-nancy, and the risk of malformations is significantly increased above control levels only at doses above 15 rad. Therefore, exposure of the fetus to radiation arising from diagnostic procedures would rarely be cause, by itself, for terminating a pregnancy.

If the x-ray examination involves the abdomen in such a way that the fetus is in the direct x-ray beam, then fetal doses are typically in the 1 to 4 rad (1 rad = 1 cGy) range depending on the number of films and fluoroscopic time (if any).

If the examination does not involve the abdomen, and the fetus re-ceives only scatter radiation, the fetal dose is generally small (typically, well below 1 rad).