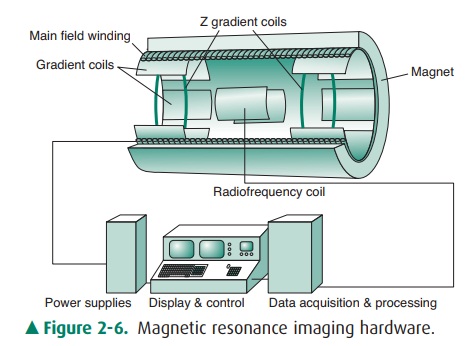 The technique called nuclear magnetic resonance, developed by physicists in the 1940s, was first utilized for imaging the human body in the late 1970s.

The technique called nuclear magnetic resonance, developed by physicists in the 1940s, was first utilized for imaging the human body in the late 1970s. The nuclei of some atoms (no-tably hydrogen nuclei in the body) have a fundamental angular momentum called spin, which causes them to behave like tiny spinning magnets. When placed in a uniform external mag-netic field and excited by a radio pulse tuned to a resonant fre-quency that is proportional to the externally applied magnetic field strength (Larmor frequency), the axis of rotation of the nuclei will precess around the applied magnetic field direction in a similar fashion to the precession of a leaning gyroscope or top about the gravitational field direction (Figure 2-5). This precession can be detected, because the collection of pro-cessing magnets (protons in the body) induces an oscilla-tory voltage in a pickup or receiver coil. This oscillation at the Larmor frequency can be detected by connecting the pickup coil to a radio receiver, and one could therefore, in effect, hear the protons “singing” in unison into the coil at the Larmor frequency. This provides no imaging informa-tion; however, if the external magnetic field is made nonuni-form in space in a known fashion (ie, a magnetic field gradient is utilized), then protons at different locations will precess at different frequencies, thereby creating a relation-ship between location in the body and precessional fre-quency. With application of such a gradient, the protons no longer sing in unison, but at different frequencies depend-ing on their location, as in a chorus; that is, the sopranos would be located where the magnetic field was largest and the baritones where it was smallest. By listening to different frequencies, one could deduce from the signal strength at a given frequency how many protons were present at the loca-tion corresponding to that frequency. This method of imag-ing allows one to map the density of protons in the body inthree dimensions; however, most images are obtained and displayed as planar cross-sectional images similar to those in CT scans and having a slice thickness of 10 mm and a ma-trix size that is typically 128 256. For greater contrast, the proton density images may also be weighted by the relax-ation times (T1, T2), which are measures of the realignment times of protons with respect to the magnetic field direc-tion. This weighting is typically accomplished by varying the radiofrequency pulse durations and spacings in a variety of pulse sequences, the spin-echo pulse sequence being the most commonly used. 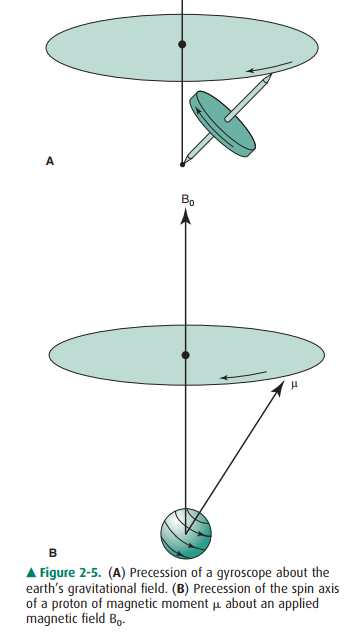 Figure 2-5. (A) Precession of a gyroscope about the earth’s gravitational field. (B) Precession of the spin axis of a proton of magnetic moment about an applied magnetic field B0.

The hardware of a (nuclear) magnetic resonance imaging machine (Figure 2-6) consists typically of a cylindrical super-conducting coil surrounding the patient to generate a large, static magnetic field; auxiliary coils for generating the mag-netic field gradients; radio transmitter/receiver coils in close proximity to the patient; electronics for radiofrequency transmitting and receiving; and a computer to orchestrate the events and to reconstruct the spatial image from the fre-quency spectra. 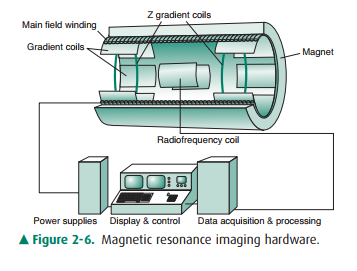