Interaction of X-rays with Matter 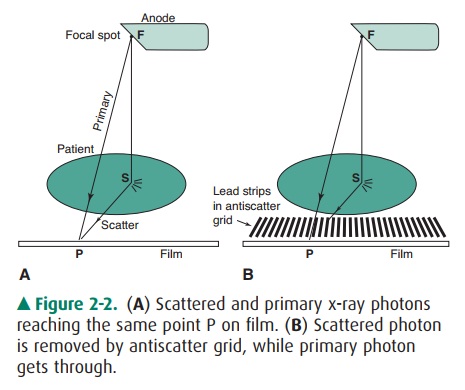 X-rays primarily interact with matter through interaction of their oscillating electric field with the atomic electrons in the material.

Interaction of X-rays with Matter

X-rays primarily interact with matter through interaction of their oscillating electric field with the atomic electrons in the material. Having no electrical charge, the x-rays are more penetrating than other types of ionizing radiation (such as alpha or beta particles) and are therefore useful for imaging the human body. The x-rays may be absorbed or scattered by the atomic electrons. In the absorption process (photoelectric absorption), the x-ray is completely absorbed, giving all its energy to an inner shell atomic electron, which is then ejected from the atom and goes on to ionize other atoms in the im-mediate vicinity of the initial interaction. In the scattering process (Compton scattering), the x-ray ricochets off an atomic electron, losing some of its energy and changing its direction. The recoiling electron also goes on to ionize hun-dreds of atoms in the vicinity. Electrons from both processesgo on to ionize many other atoms and are responsible for the biological damage produced by x-rays. 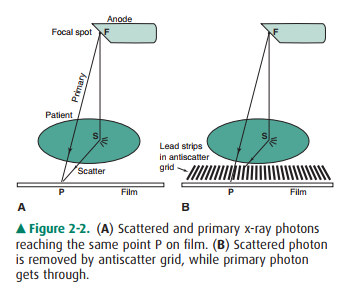 Figure 2-2. (A) Scattered and primary x-ray photons reaching the same point P on film. (B) Scattered photon is removed by antiscatter grid, while primary photon gets through.

The attenuation of the x-ray intensity with thickness of material follows an exponential law due to the random hit-or-miss nature of the interaction. The process is similar to fir-ing a volley of rifle bullets into a forest, where the bullets may either stick in a tree (be absorbed) or ricochet off a tree (scat-ter). The deeper you go into the forest, the fewer bullets there are; however, a bullet still has a chance of traveling through the forest without hitting a tree. Likewise, an x-ray can make it all the way through a patient’s body without touching any-thing and remain unchanged, as if it had passed through a vacuum instead. These are called primary x-rays. Typically, only about 1% of the incident x-rays penetrate the patient, and only about a third of these are primary x-rays; the rest are scattered x-rays that do not contribute to the anatomic image. An x-ray image is a shadow or projection image which assumes that x-rays reaching the film have traveled in a straight line from the source, but this is true only for the pri-mary x-rays. As Figure 2-2A shows, the film density (black-ness) at point P on the film is related to the anatomy along line FP. The scattered photon reaches the film along the path FSP and is relaying information about the anatomy at the random point S to point P on the film. Scatter simply pro-duces a uniform gray background; it does not contribute to the image. Because scatter reduces image contrast, it is desir-able that the scatter be removed. This task is accomplished by use of an antiscatter grid (Figure 2-2B). This grid consists of a series of narrow lead strips with radiolucent (low-attenuation) interspace material to remove some of the scatter. With the grid, the scattered photon shown in the figure can no longer reach the film, but the primary x-rays can. More of the scat-ter than primary x-rays is eliminated by the grid; hence, image contrast increases, but at the cost of an increase of a factor of 2 to 3 in patient dose. This increase occurs because the scatter, which was previously blackening the film, has been reduced, and therefore, higher x-ray exposure to the front of the patient is necessary to get the requisite number of x-rays through the grid to blacken the film. The grid is usu-ally made to move a few interspaces during the exposure by a motor drive, in order to wash out the grid lines.

Increasing the kilovoltage is therefore beneficial to the pa-tient in that it reduces the radiation dose: that is, fewer x-rays must penetrate the front of the patient to get the requisite number out the back to blacken the film. However, an in-crease in kilovoltage will reduce image contrast because the absorption process, which is sensitive to atomic number, will decrease and the scattering process is independent of the atomic number of the materials. Even with materials of the same atomic number, contrast improves at lower kilovoltage settings because of higher attenuation, which results in greater differential attenuation between different thicknesses of the same material. Thus there is a tradeoff between image quality (contrast) and patient dose that must be weighed in the selection of kilovoltage.