Although busy-waiting is generally wasteful of CPU resources, it has the property by which we know, in advance, the order in which the threads will execute the code in the critical section: thread 0 is first, then thread 1, then thread 2, and so on.

Although busy-waiting is generally wasteful of CPU resources, it has the property by which we know, in advance, the order in which the threads will execute the code in the critical section: thread 0 is first, then thread 1, then thread 2, and so on. With 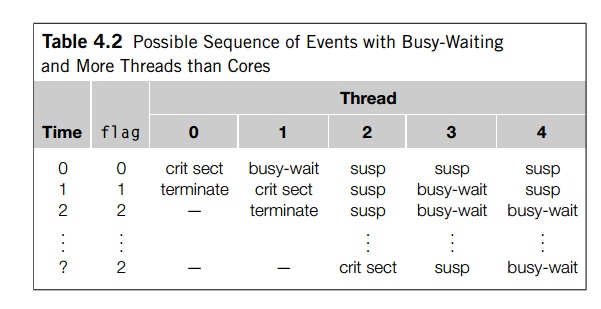 mutexes, the order in which the threads execute the critical section is left to chance and the system. Since addition is commutative, this doesn’t matter in our program for estimating . However, it’s not difficult to think of situations in which we also want to control the order in which the threads execute the code in the critical section. For example, suppose each thread generates an n n matrix, and we want to multiply the matrices together in thread-rank order. Since matrix multiplication isn’t commutative, our mutex solution would have problems:

/* product matrix is initialized to be the identity matrix */

Of course, this solution would have the same problems that any busy-waiting solution has, so we’d prefer a different approach.

After executing the assignment in Line 10, we’d like to “notify” the thread with rank dest that it can proceed to print the message. We’d like to do something like this:

Notify thread dest that it can proceed;

It’s not at all clear how mutexes can be of help here. We might try calling pthread mutex unlock to “notify” the thread with rank dest. However, mutexes are initialized to be unlocked, so we’d need to add a call before initializing messages[dest] to lock the mutex. This will be a problem since we don’t know when the threads will reach the calls to pthread mutex lock.

To make this a little clearer, suppose that the main thread creates and initializes an array of mutexes, one for each thread. Then, we’re trying to do something like this:

Now suppose we have two threads, and thread 0 gets so far ahead of thread 1 that it reaches the second call to pthread mutex lock in Line 7 before thread 1 reaches the first in Line 2. Then, of course, it will acquire the lock and continue to the printf statement. This will result in thread 0’s dereferencing a null pointer, and it will crash.

There are other approaches to solving this problem with mutexes. See, for exam-ple, Exercise 4.7. However, POSIX also provides a somewhat different means of controlling access to critical sections: semaphores. Let’s take a look at them.

Semaphores can be thought of as a special type of unsigned int, so they can take on the values 0, 1, 2, . . . . In most cases, we’ll only be interested in using them when they take on the values 0 and 1. A semaphore that only takes on these values is called a binary semaphore. Very roughly speaking, 0 corresponds to a locked mutex, and 1 corresponds to an unlocked mutex. To use a binary semaphore as a mutex, you initialize it to 1—that is, it’s “unlocked.” Before the critical section you want to protect, you place a call to the function sem wait. A thread that executes sem wait will block if the semaphore is 0. If the semaphore is nonzero, it will decrement the semaphore and proceed. After executing the code in the critical section, a thread calls sem post, which increments the semaphore, and a thread waiting in sem wait can proceed.

Program 4.8: Using semaphores so that threads can send messages

/*  semaphores is allocated and initialized to 0 (locked) in

The syntax of the various semaphore functions is

We won’t make use of the second argument to sem init: the constant 0 can be passed in. Note that semaphores are not part of Pthreads. Hence, it’s necessary to add the following preprocessor directive to any program that uses them:5

Finally, note that the message-sending problem didn’t involve a critical section. The problem wasn’t that there was a block of code that could only be executed by one thread at a time. Rather, thread my rank couldn’t proceed until thread source had finished creating the message. This type of synchronization, when a thread can’t proceed until another thread has taken some action, is sometimes called producer-consumer synchronization.