Recall that for a number of years now, processors have been able to execute oper-ations much faster than they can access data in main memory. If a processor must read data from main memory for each operation, it will spend most of its time simply waiting for the data from memory to arrive.

Recall that for a number of years now, processors have been able to execute oper-ations much faster than they can access data in main memory. If a processor must read data from main memory for each operation, it will spend most of its time simply waiting for the data from memory to arrive. Also recall that in order to address this problem, chip designers have added blocks of relatively fast memory to processors. This faster memory is called cache memory.

In Section 2.3.4, we saw that the use of cache memory can have a huge impact on shared-memory. Let’s recall why. First, consider the following situation: Sup-pose x is a shared variable with the value five, and both thread 0 and thread 1 read x from memory into their (separate) caches, because both want to execute the statement

Here, my y is a private variable defined by both threads. Now suppose thread 0 executes the statement

where my z is another private variable.

What’s the value in my_z? Is it five? Or is it six? The problem is that there are (at least) three copies of x: the one in main memory, the one in thread 0’s cache, and the one in thread 1’s cache. When thread 0 executed x++, what happened to the values in main memory and thread 1’s cache? This is the cache coherence problem, which we discussed in Chapter 2. We saw there that most systems insist that the caches be made aware that changes have been made to data they are caching. The line in the cache of thread 1 would have been marked invalid when thread 0 executed x++, and before assigning my_z = x, the core running thread 1 would see that its value of x was out of date. Thus, the core running thread 0 would have to update the copy of x in main memory (either now or earlier), and the core running thread 1 would get the line with the updated value of x from main memory. For further details, see Chapter 2.

The use of cache coherence can have a dramatic effect on the performance of shared-memory systems. To illustrate this, recall our Pthreads matrix-vector multipli-cation example: The main thread initialized an mxn matrix A and an n-dimensional vector x. Each thread was responsible for computing m=t components of the product vector y = Ax. (As usual, t is the number of threads.) The data structures representing A, x, y, m, and n were all shared. For ease of reference, we reproduce the code in Program 4.13.

Since S<= t, E<= 1. Table 4.5 shows the run-times and efficiencies of our matrix-vector multiplication with different sets of data and differing numbers of threads. 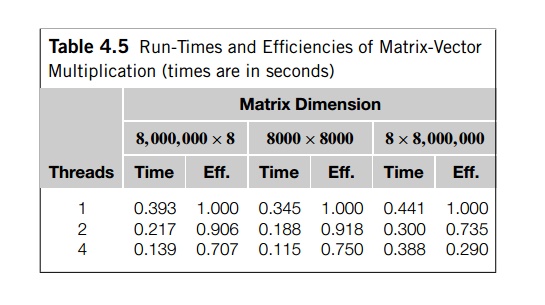 Recall that a write-miss occurs when a core tries to update a variable that’s not in the cache, and it has to access main memory. A cache profiler (such as Valgrind [49]) shows that when the program is run with the 8, 000, 000x 8 input, it has far more cache write-misses than either of the other inputs. The bulk of these occur in Line 9. Since the number of elements in the vector y is far greater in this case (8,000,000 vs. 8000 or 8), and each element must be initialized, it’s not surprising that this line slows down the execution of the program with the 8, 000, 000 x8 input.

Also recall that a read-miss occurs when a core tries to read a variable that’s not in the cache, and it has to access main memory. A cache profiler shows that when the program is run with the 8 x8, 000, 000 input, it has far more cache read-misses than either of the other inputs. These occur in Line 11, and a careful study of this program (see Exercise 4.15) shows that the main source of the differences is due to the reads of x. Once again, this isn’t surprising, since for this input, x has 8,000,000 elements, versus only 8000 or 8 for the other inputs.

It should be noted that there may be other factors that are affecting the relative performance of the single-threaded program with the differing inputs. For example, we haven’t taken into consideration whether virtual memory (see Section 2.2.4) has affected the performance of the program with the different inputs. How frequently does the CPU need to access the page table in main memory?

will be much larger. Why, then, is the multithreaded performance of the program so much worse with the 8 x8, 000, 000 input?

Cache coherence is enforced at the “cache-line level.” That is, each time any value in a cache line is written, if the line is also stored in another processor’s cache, the entire line will be invalidated—not just the value that was written. The system we’re using has two dual-core processors and each processor has its own cache. Suppose for the moment that threads 0 and 1 are assigned to one of the processors and threads 2 and 3 are assigned to the other. Also suppose that for the 8 8, 000, 000 problem all of y is stored in a single cache line. Then every write to some element of y will invalidate the line in the other processor’s cache. For example, each time thread 0 updates y[0] in the statement

If thread 2 or 3 is executing this code, it will have to reload y. Each thread will update each of its components 8, 000, 000 times. We see that with this assignment of threads to processors and components of y to cache lines, all the threads will have to reload y many times. This is going to happen in spite of the fact that only one thread accesses any one component of y—for example, only thread 0 accesses y[0].

Each thread will update its assigned components of y a total of 16,000,000 times. It appears that many, if not most, of these updates are forcing the threads to access main memory. This is called false sharing. Suppose two threads with separate caches access different variables that belong to the same cache line. Further suppose at least one of the threads updates its variable. Then even though neither thread has written to a variable that the other thread is using, the cache controller invalidates the entire cache line and forces the threads to get the values of the variables from main memory. The threads aren’t sharing anything (except a cache line), but the behavior of the threads with respect to memory access is the same as if they were sharing a variable, hence the name false sharing.

Why is false sharing not a problem with the other inputs? Let’s look at what happens with the 8000 8000 input. Suppose thread 2 is assigned to one of the pro-cessors and thread 3 is assigned to another. (We don’t actually know which threads are assigned to which processors, but it turns out—see Exercise 4.16—that it doesn’t matter.) Thread 2 is responsiblefor computing

and thread 3 is responsible for computing

then it’s conceivable that there might be false sharing of this cache line. However, thread 2 will access

at the end of its for i loop, while thread 3 will access

at the beginning of its for i loop. So it’s very likely that when thread 2 accesses (say) y[5996], thread 3 will be long done with all four of

This brings up the question of how we might avoid false sharing in our matrix-vector multiplication program. One possible solution is to “pad” the y vector with dummy elements in order to insure that any update by one thread won’t affect another thread’s cache line. Another alternative is to have each thread use its own private stor-age during the multiplication loop, and then update the shared storage when they’re done. See Exercise 4.18.