Environmental control—trying to prevent exposure to the allergen—is possible for indi-viduals sensitized to a limited number of allergens; however, it cannot be easily achieved by individuals sensitized with multiple or ubiquitous allergens.

Environmental control—trying to prevent exposure to the allergen—is possible for indi-viduals sensitized to a limited number of allergens; however, it cannot be easily achieved by individuals sensitized with multiple or ubiquitous allergens.

Hyposensitization is the standard of care in individuals with insect venom IgE-medi-ated hypersensitivity and has beneficial results in patients suffering from pollen and peren-nial allergies (i.e., dust mites, cat dander). Hyposensitization is achieved by subcutaneous injection of very small quantities of the sensitizing antigen, starting at the nanogram level, and increasing the dosage on a weekly basis. This induces the production of IgG blocking antibodies and an increase in the number of regulatory cells able to turn off the production of IgE antibodies, as reflected by a decline of serum IgE levels. Because both effects tend to be simultaneous, they appear to correlate with a decrease of the allergic symptoms (Fig. 21.7).

Conceptually, circulating blocking antibodies of the IgG class should have a protec-tive effect by combining with the antigen before it reaches the cell-bound IgE. In fact, a sig-nificant clinical improvement correlates better with an increase in blocking IgG than with a decrease in antigen-specific IgE.

The beneficial effect of the competition between IgG and IgE antibodies is easy to understand in cases of insect venom anaphylaxis in which the allergen is injected directly in the circulation where it can be “blocked” by circulating IgG; however, it is more difficult to understand the protective mechanism involved in respiratory allergies, when the allergen has almost direct access to the sensitized cells without entering the sys-temic circulation. It must be stressed, however, that the results of hyposensitization in respiratory allergies are not as consistent as the results of hyposensitization against insect venoms.

For unclear reasons, IgG blocking antibodies do not interfere with a RAST assay for IgE antibodies. Therefore, a successfully hyposensitized patient may show persistently ab-normal results in the RAST assay.

Various drugs are used to treat or prevent immediate hypersensitivity reactions. Some in-hibit or decrease mediator’s release by mast cells or basophils; others block or reverse the effect of mediators. The complex interactions of different drugs able to influence mediator release are summarized in Figure 21.8. 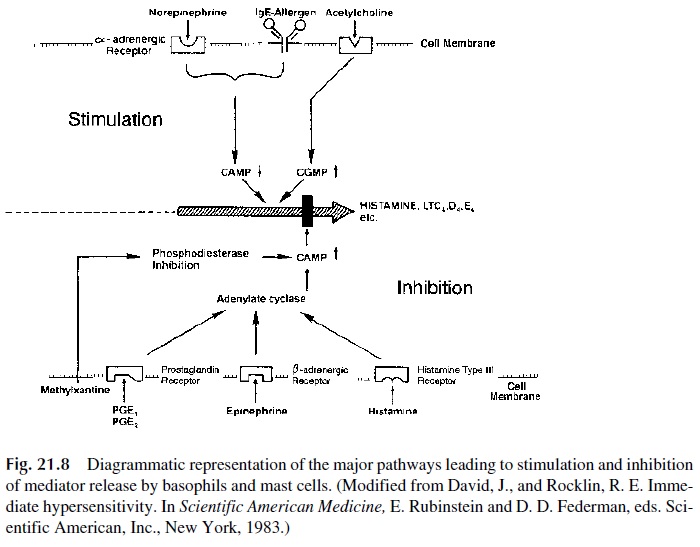 Bronchial asthma presents very complex therapeutic problems. Current therapy is based upon the understanding that an initial acute bronchoconstrictive attack is followed by progressive inflammation in the airways and, later, by increased bronchial responsiveness. Each phase requires a different treatment.

In the early phase, relief of bronchial obstruction is the initial therapeutic goal. β-Adren-ergic agonists, methylxanthines, and anticholinergic compounds are the main drugs used.

β-Adrenergic receptor agonists (epinephrine, isoproterenol, and albuterol) increase cAMP levels by stimulating membrane adenylcyclase directly, inhibiting further degranulation of mast cells and basophils. As stated earlier, epinephrine is the drug of choice for treatment of severe allergic reactions such as anaphylaxis or severe asthma. However, these drugs do not affect eosinophils so that when patients have significant peribronchial eosinophilic inflammation, administration of β-agonists will have dimin-ishing benefits. The patient will have a tendency to increase their use to try to achieve symptomatic relief. But since eosinophils are unaffected, the bronchitis progresses and can reach a stage at which the patient is at risk of death or near death. A patient’s in-creasing need for β-agonists should be considered a sign of worsening lower airway in-flammation.

Methylxanthines (e.g., theophylline) block phosphodiesterases, leading to a persis-tently high intracellular level of cAMP, which in turn inhibits histamine release. However, recent studies have led us to question this interpretation because the levels of serum methylxanthine reached during the treatments are much lower than those needed to inhibit phosphodiesterases.

Most cholinergic agents, raising intracellular levels of cyclic GMP, have an enhanc-ing effect on mediator release: their use must be avoided in asthmatic patients since they aggravate the symptoms. On the opposite side, anticholinergic drugs that block vagal cholinergic tone may be useful but are not as efficient as β-agonists.

In the late phase, treatment needs to focus on the eosinophilic bronchitis, an inflammatory reaction no longer responding to the agents useful for treatment in the early phase. There-fore, the treatment’s goals are quite different and will include locally administered corti-costeroids, cromolyn, and leukotriene-modifying drugs.

Glucocorticoids have no direct action on IgE synthesis or mast cell degranulation in the lung but strongly inhibit eosinophil degranulation, and thus they have an excellent anti-inflammatory effect that inhibits the progression of the late phase, preventing or reducing bronchial hyperresponsiveness.

These effects can be achieved safely through the administration of glucocorticoids by aerosol, delivering small intrabronchial concentrations that result in local anti-inflammatory effects with low daily doses. This avoids the risk of systemic side effects previously incurred with chronic systemic administration. Glucocorticoids administered by aerosol are now rec-ommended for the treatment of chronic asthma, irrespective of its degree or severity.

Disodium cromoglycate (cromolyn) and nedocromil sodium (not shown in Fig. 21.8) are examples of prophylactic drugs. Their mechanism of action is still being investigated; however, it is believed that these drugs attenuate mast cell degranulation. Objectively, they decrease bronchoconstriction and have proven invaluable in helping to reduce the needs for glucocorticoids.

Several leukotriene-modifying drugs are being employed in the treatment of asthma. These agents include lipooxygenase enzyme inhibitors, which downregulate the production of leukotrienes, and leukotriene receptor antagonists that block the effects of leukotrienes. Presently they are used in mild forms of asthma or as adjuncts to inhaled glucocorticoids.

This 20-year-old college student with rhinitis and asthma represents an individual with atopic disease. She has symptoms consistent with inflammation in the upper and lower air-ways. Her environment changed with the new semester, and she had worsening of her al-lergic disease. It is probable that her exposure to cat allergens, as well as increased levels of mold and dust mite allergens, is contributing to her most severe symptoms.

When allergens enter the airways during respiration, they induce an allergic re-sponse in the respiratory mucosa. In the nasal airways, the inflammation and glandular hy-persecretion results in nasal airway obstruction. In the lower airway the main changes are an eosinophilic inflammation associated with smooth muscle hypertrophy, mucosal edema, glandular hypersecretion, and bronchospasm. These changes in the lower airway result in a reduction of the airways caliber, which is more accentuated during expiration, causing air trapping and difficulty exhaling. The use of a beta-agonist results in smooth muscle re-laxation and the ability to exhale against a lessened airway resistance.

A biopsy of the bronchial mucosa would reveal marked inflammation of the mucosa. There would be a cellular infiltrate with abundant eosinophils. Glandular hyperplasia and denudation of the cillated epithelial cells would also likely be present. The basement mem-brane would appear thickened.

This patient’s atopic disease is promoted by a predominantly TH2 response. As a con-sequence of the release of large amounts of IL-4, a cytokine critical to the elaboration of IgE, she has an elevated IgE and likely has specific IgE for allergens derived from sources such as mold spores, dust mites, and cat dander. In addition, the inflammation is typically eosinophilic, and IL-5 is a necessary chemokine for eosinophils.

Acutely, this patient needs to have relief of the airway obstruction. Bronchodilators, including inhaled beta-agonists and theophylline, would be used. Long term the patient would require anti-inflammatory agents. Initially, systemic glucocorticoids would be em-ployed. However, for long-term term therapy inhaled agents such as aerosolized gluco-corticoids, inhaled cromolyn or nedocromil, and leukotriene-modifying agents would be preferred.