Early and Late Phases in Type I Hypersensitivity

The metachromatic cytoplasmic granules of basophils and mast cells contain a variety of preformed mediators.

Early and Late Phases in Type I Hypersensitivity

The metachromatic cytoplasmic granules of basophils and mast cells contain a variety of preformed mediators (Table 21.3). After cross-linking of Fc-receptor associated IgE, mast cells and basophils undergo a series of biochemical and structural changes. 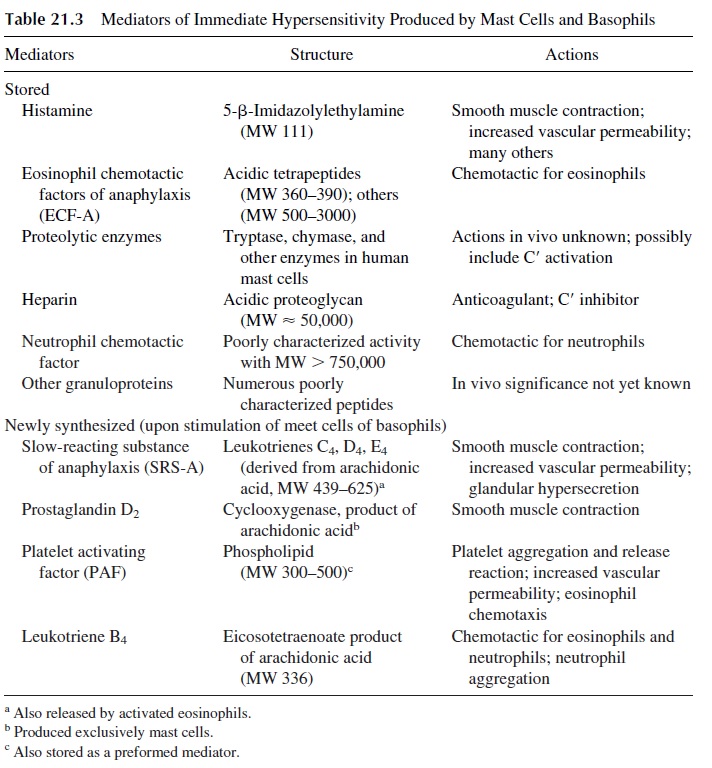 The first change to be detected is the polymerization of microtubules, which is en-ergy-dependent (inhibited by 2-deoxyglucose), enhanced by the addition of 3’ ,5’ -guano-sine monophosphate (GMP), and inhibited by the addition of 3’ ,5’ -adenosine monophos-phate (AMP) and colchicine. The polymerization of microtubules allows the transport of the cytoplasmic granules to the cell membrane to which they fuse. This is followed by the opening of the granules and the release of histamine and other preformed mediators, such as platelet-activating factor (PAF) and chemotactic factors for eosinophils (ECFA), into the surrounding medium. In vitro, this sequence of events takes 30–60 seconds.

Histamine is the mediator responsible for most of the symptoms observed during the early phase of allergic reactions. Since the constricting effect of histamine on the smooth muscle lasts only 1 or 2 hours, this phase stops shortly after most of the granules have been emptied.

Platelet-activating factor (PAF), a mediator rapidly released after basophil/mast cell activation, is a phospholipid whose effects include platelet aggregation, chemotaxis of eosinophils, release of vasoactive amines, and increased vascular permeability (both due to a direct effect and to the release of vasoactive amines). PAF is also released by neutrophils and other cells.

The cells remain viable after degranulation and proceed to synthesize other substances, which will be released at a later time, causing the late phase of a type I hypersensitivity reaction. The mediators responsible for the late phase of the response are not detected until several hours after release of histamine and other preformed mediators. The long la-tency period between cell stimulation and detection of these mediators suggest that they are synthesized by mast cells after stimulation and/or by cells attracted by the above-mentioned chemotactic factors. The main mediators involved in the late phase are leukotrienes C4, D4, and E4 [LTC4, LTD4, LTE4, slow reacting substance of anaphylaxis (SRS-A)]. This mixture of leukotrienes previously known as SRS-A reaches effective con-centrations only 5–6 hours after challenge and have effects on target cells lasting for sev-eral hours. LTC4 and LTD4are several fold more potent than histamine in causing smooth muscle contraction, bronchovascular leak, and mucous hypersecretion in human bronchi.

3. Role of Eosinophils in the Late Phase

Eosinophils are attracted to the site where an immediate hypersensitivity reaction is taking place by chemotactic factors released by basophils, mast cells, and TH 2 lymphocytes:

In many cases, the appearance of eosinophils signals the onset of internal negative feedback and control mechanisms that terminate the immediate hypersensitivity reaction. This effect is associated with the production and release of enzymes, particularly histami-nase (which degrades histamine) and phospholipase D (which degrades PAF). Active oxy-gen radicals released by stimulated granulocytes, including eosinophils and perhaps neu-trophils (which are also attracted by ECF-A and LTB4), cause the breakdown of leukotrienes. Histamine itself can contribute to the downregulation of the allergic reaction by binding to a type II histamine receptor expressed on basophils and mast cells; the occu-pancy of this receptor leads to an intracellular increase in the level of cAMP which inhibits further release of histamine (negative feedback).

In contrast, persistent eosinophil infiltrates are associated with intense inflammation that causes prolongation of symptoms. For example, asthmatic patients may develop a pro-longed crisis during which the symptoms remain severe, and breathing becomes progres-sively more difficult, leading to a situation of increasing respiratory distress, which does not respond to the usual treatment.

In these patients it is frequent to find very heavy peribronchial cellular infiltrates of the epithelium and lamina propria, where eosinophils predominate, but containing also T lymphocytes and plasma cells (chronic eosinophilic bronchitis). The infiltrating lympho-cytes are mostly activated CD4, CD25+ T lymphocytes, whose cytokine mRNA pattern is typical of the TH 2 subpopulation.

2.           IL-13, a cytokine related to IL-4, has been shown in experimental animal mod-els to induce the pathophysiological features of asthma in an IgE and eosinophil-independent manner. This observations raise the interesting possibility that asthma may be mediated not only by IgE-producing B cells, but also by activated TH 2 cells.

3.           IL-5 released from the infiltrating activated TH 2 lymphocytes seems to attract, retain, and activate eosinophils. Activated eosinophils release leukotrienes and two toxic proteins: eosinophilic cationic protein and major basic protein. These proteins decrease cilliary movement, are cytotoxic for bronchial epithelium, and cause nonspecific bronchial hyperactivity and cellular denudation. This is be-lieved to be a critical step in the pathogenesis of chronic airways inflammation that after decades may lead to chronic obstructive pulmonary disease with irre-versible remodeling of the airways.

A similar pathogenic sequence seems responsible for a state of bronchial hyperresponsiveness to many stimuli that develops in the wake of an asthma crisis.

The severity of the clinical symptoms in an immediate hypersensitivity reaction is di-rectly related to the amount of mediators released and produced, which in turn is deter-mined by the number of “sensitized” cells stimulated by the antigen. The expression of early and late phases can be distinguished clinically:

·              In the case of an asthma crisis, the early phase is characterized by shortness of breath and nonproductive cough and lasts 4–5 hours. If the exposure to the responsi-ble airborne allergen is very intense, life-threatening bronchospasm may de-velop. With less intense or chronic exposure, the initial symptoms of wheezing and dry cough will linger for a few hours.

·              Around the sixth hour, the cough starts to produce sputum, signaling the onset of the late phase during which the dyspnea may become more severe. In very severe cases, death may occur at this late stage because of persistent bronchoconstric-tion and peribronchial inflammation associated with increased mucous secre-tion, both factors contributing to severe airflow obstruction.