The study of total IgE levels in normal nonallergic individuals shows a distribution in three groups: high, intermediate, and low producers (Fig. 21.3). Family studies further suggested that the ability to produce high levels of IgE is a recessive trait, controlled by unknown genes independent of the HLA system. A candidate gene has been localized to chromosome 5(5q31–q33)—in close proximity to the genes for IL-4, IL-5, and IL-13. The gene in ques-tion seems not only to influence the synthesis of IgE, but also determines bronchial hyper-responsiveness to histamine and other mediators.

On the other hand, the tendency to develop allergic disorders in response to specific allergens is HLA linked. For instance, the ability to produce antigen-specific IgE after ex-posure to the Ra5 antigen of ragweed is observed more often in HLA B7, DR2 individuals than in the general population.

Recent studies suggest that various MHC class II antigens are associated with high responses to many different allergens (Fig. 21.4). The biological basis for the association between MHC-II molecules and allergic predisposition is believed to be one of the many expressions of the control exerted by APC on the immune response. This theory is based on the assumption that the MHC-II repertoire determines what anti-gen-derived peptides are most efficiently presented to helper T cells. 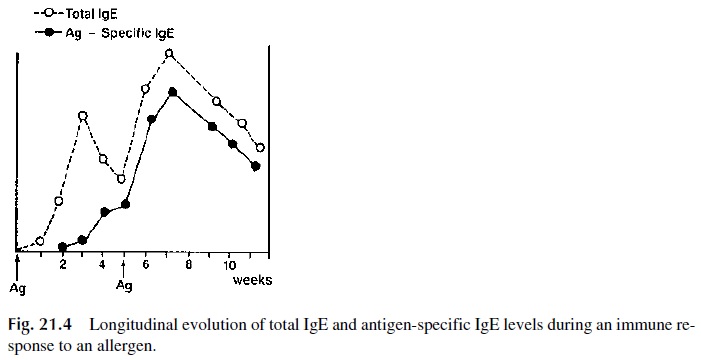 The genes controlling high IgE levels and high IgE antibody synthesis after exposure to allergens appear to have synergistic effects. For example, an HLA B7, DR2 individual who is also genetically predisposed to produce high levels of IgE is likely to have a more severe allergic disorder than an individual without this genetic combination.