Two types of Fc receptors reacting with IgE molecules have been characterized.

Two types of Fc receptors reacting with IgE molecules have been characterized.

A unique high-affinity receptor designated as Fcε -RI, expressed on the surface of ba-sophils and mast cells. Most IgE antibodies interact with this receptor and become cell-as-sociated soon after secretion from plasma cells.

The structure of the Fcε -RI is unique among the well-characterized lymphoid cell re-ceptors. It is composed of three subunits: a heterodimer formed by the interaction of two chains (α and β), and a homodimer of a third type of chain (γ chain). The whole molecule is therefore designated as αβγ 2 (Fig. 21.5). The external domain of the α chain binds the Fc portion of IgE. The β and γchains function as signal transduction units. Both of them contain ITAM motifs . Cross-linking of the Fcε -RI results in activation of the protein kinase Lyn, which phosphorylates ITAM tyrosines, leading then to the activa-tion of other protein kinases, such as Syk, as well as of the integral membrane linker molecule LAT . The phosphorylation of Syk and LAT is followed by ac-tivation of signaling cascades, which eventually lead to the release of performed granules and to the expression of a variety of genes coding for cytokines, enzymes, etc. 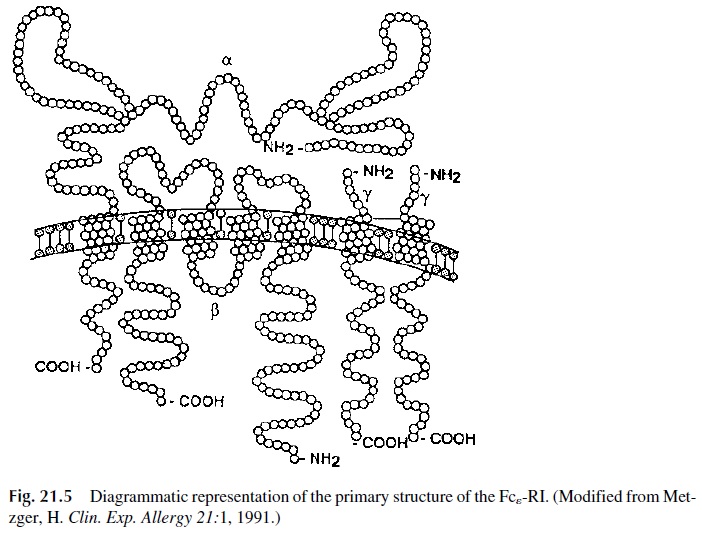 The interaction between the Fcε -RI and IgE is consistent with a simple bimolecular forward reaction and a first-order reverse reaction:

The affinity constant of the interaction, KA=k1/k-1 ranges from 108 to 1010 M/L -1. Because of the high affinity of the interaction between IgE and this Fcε -RI, IgE binds rapidly and very strongly to cells expressing it and is released from these cells very slowly. Passively transferred IgE remains cell-bound for several weeks in the skin of normal hu-mans. Because the mast cells and basophils do not produce IgE molecules, there is no clonal restriction at the mast cell/basophil level. Therefore, if the patient produces IgE an-tibodies to more than one allergen, each basophil or mast cell may bind IgE antibodies of different specificities.

The interaction between IgE and Fcε -RI does not result in cell activation. IgE serves as an antigen-receptor for mast cells and basophils. Receptor-bound IgE discriminates among antigens, binding exclusively those to which the patient has become sensitized. Re-ceptor-bound IgE must be cross-linked in order for basophils and mast cells to release their intracellular mediators (Fig. 21.6). The physiological cross-linking agent is the allergen, which is multivalent. Cross-linking of receptor bound IgE can also be induced with anti-IgE antibodies or with their divalent F(ab')2 fragments. Unoccupied receptors may be cross-linked with aggregated Fc fragments of IgE. In contrast, mast cells and basophils with IgE-antihapten antibodies on their membranes, cannot be stimulated by soluble, univalent, haptens, because those are unable to cross-link membrane IgE molecules. Stimulation is only possible when carrier-bound haptens are used, because those can cross-link many IgE molecules. 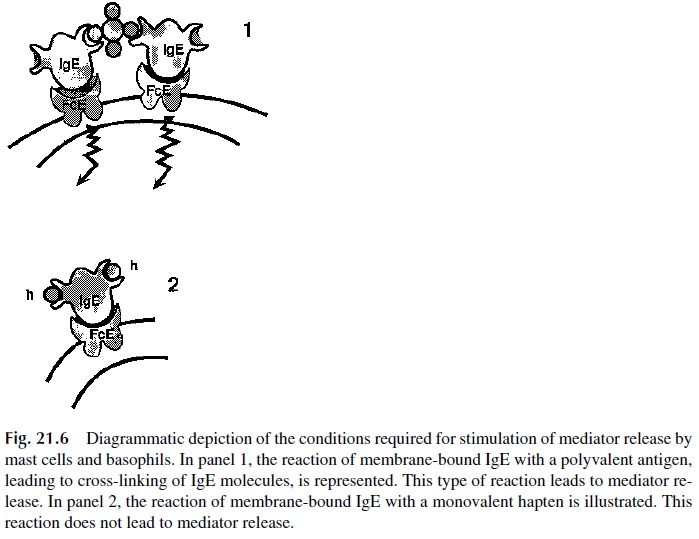 All the types of cross-linking listed above are equally efficient in activating IgE-car-rying mast cells and basophils. The details concerning the sequence of events in the ensu-ing activation cascade are still under investigation. The consequences of activation, how-ever, are well known: release of granule contents into the extracellular space and activation of the synthesis of additional mediators.

Cross-linking of receptor-bound IgE is not the only signal leading to the liberation of mediators from basophils and mast cells; these cells also respond to C3a, C5a, basic lyso-somal proteins, kinins, and autoantibodies of the IgG isotype directed against the subunit of the Fcε -RI (these autoantibodies are detected in 40% of the patients with chronic idio-pathic urticaria). It is apparent that there are multiple pathways for mast cell activation and that the participation of cell-bound IgE is not always needed.

Fcε -RII (CD23) is expressed on the membrane of lymphocytes, platelets, eosinophils, and dendritic cells and binds IgE with lower affinity than Fcε -RI. The role of Fcε -RII on dendritic cells has been previously discussed, and it is supposed to be involved in targeting eosinophils to parasites in one of the different variations of ADCC; its effect on platelets and lymphocytes is unclear.