Immediate hypersensitivity or allergic reactions can have a variety of clinical expressions, including anaphylaxis, bronchial asthma, urticaria (hives), and rhinitis (hay fever).

Immediate hypersensitivity or allergic reactions can have a variety of clinical expressions, including anaphylaxis, bronchial asthma, urticaria (hives), and rhinitis (hay fever). Table 21.1 summarizes the morbidity and mortality data for the two most severe types of allergic reactions, anaphylaxis and asthma.

Anaphylaxis is an acute life-threatening IgE-mediated reaction usually affecting multiple organs. The time of onset of symptoms depends on the level of hypersensitivity and the nature of the antigen, intensity of exposure, and site of exposure to the antigen. In a typical case, manifestations begin within 5–10 minutes after antigenic challenge. Reac-tions that appear more slowly tend to be less severe. Intervals longer than 2 hours leave the diagnosis of anaphylaxis open to question.

As a rule, most of the acute manifestations subside within 1 or 2 hours. However, similar symptoms of variable intensity may occur 6–12 hours later. This late phase reaction results from cytokine release from activated basophils, secondary immune cell activation, and further elaboration and release of mediators of inflammation—mechanisms very sim-ilar to those responsible for the late phase of asthma.

When death occurs, it is usually due to laryngeal edema, intractable bronchospasm, hypotensive shock, or cardiac arrhythmias developing within the first 2 hours.

Atopy is defined as a genetically determined state of IgE-related disease. Its most common clinical manifestations include asthma, rhinitis, urticaria, and atopic dermatitis. Allergic asthma, by its potential severity and frequency, is the most important manifesta-tion of atopy. However, not all cases of asthma are of proven allergic etiology. The differ-ential characteristics of allergic (extrinsic) and nonallergic (intrinsic) asthma are summa-rized in Table 21.2. The major difference between both is the strong association of allergic asthma with specific IgE antibodies and eosinophils, both of which play important patho-physiological roles. 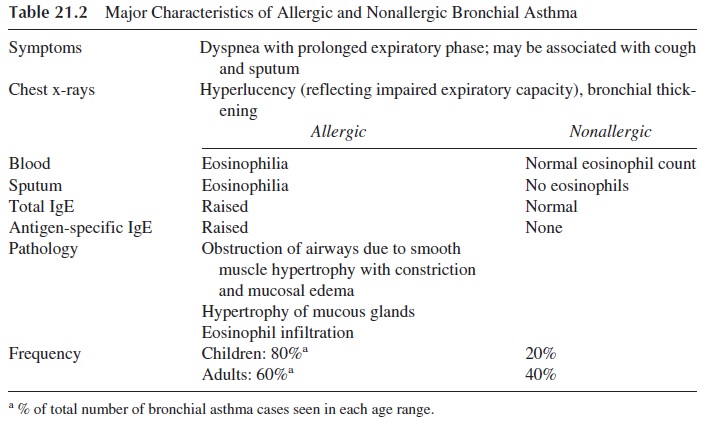 A 20-year-old female attending college in the Southeast presented to the infirmary with wheezing, nocturnal cough, and shortness of breath. She reported that since the fall she had worsening of her asthma as well as nasal congestion and paroxysms of sneezing. During the summer at her parents’ residence in Los Alamos, New Mexico, she had minimal nasal congestion in the mornings. She admitted to a long history of mild wheezing as a child. This semester she resides in a home with several other students. There is a cat in the house, al-though she avoids it as it makes her eyes itch. Presently she uses her albuterol inhaler fre-quently during the day and at night.

On physical exam she was audibly wheezing and mildly tachypneic. Her conjuncti-vae were mildly injected. The nasal mucosa was edematous and pale with coplous watery secretions. Ears were normal, and mouth was unremarkable. Auscultation of the chest re-vealed a prolonged expiratory phase with diffuse wheezing bilaterally. Extremities were without clubbing, cyanosis, or edema.

·              What possible factors contributed to her respiratory problems?

·              What histolopathological findings would be expected on a biopsy of the bronchial mucosa?

·              Which cytokines are critically involved in the pathogenesis of this patient’s allergic disease?