The first human red cell antigen system to be characterized was the ABO blood group system.

A. The ABO System

The first human red cell antigen system to be characterized was the ABO blood group system. Specificity is determined by the terminal sugar in an oligosaccharide backbone structure. The terminal sugars of the oligosaccharides defining groups A and B are immuno-genic. In group O the precursor H oligosaccharide is unaltered. The red cells express either A, B, both A and B, or neither, and antibodies are found in serum to antigens not expressed, as shown in Table 22.1.

The ABO group of a given individual is determined by testing both cells and serum. The subject’s red cells are mixed with serum containing known antibody, and his serum is tested against cells possessing known antigen. For example, the cells of a group A individ-ual are agglutinated by anti-A serum but not by anti-B serum, and his serum agglutinates type B cells but not type A cells. The typing of cells as group O is done by exclusion (a cell not reacting with anti-A or anti-B is considered to be of blood group O).

The anti-A and anti-B isoagglutinins are synthesized as a consequence of cross-im-munization with Enterobacteriaceae that have outer membrane oligosaccharides strikingly similar to those that define the A and B antigens . For example, a newborn with group A blood will not have anti-B in his serum, since it has had no opportunity to un-dergo cross-immunization. When his intestine is eventually colonized by the normal mi-crobial flora, the infant will start to develop anti-B, but will not produce anti-A because of his tolerance to his own blood group antigens (see Table 22.1).

The inheritance of the ABO groups follows simple Mendelian rules, with three com-mon allelic genes—A, B, and O (A can be subdivided into A1 and A2)—of which any indi-vidual will carry two, one inherited from the mother, and one from the father.

B. The Rh System

In the late 1930s it was discovered that the sera of most women who gave birth to infants with hemolytic disease contained an antibody that reacted with the red cells of their in-fants and with the red cells of 85% of Caucasians. A year later it was discovered that a reagent produced by injecting blood from the monkey Macacus rhesus into rabbits and guinea pigs agglutinated Rhesus red cells and appeared to have the same specificity as the neonatal antibody. Individuals whose cells reacted with the reagent were termed Rh-positive (for the Rhesus monkey); those whose cells were not agglutinated were termed Rh-negative.

2. Theories, Nomenclatures, and Antigens of the Rh system

The Rh system is now known to have many antigens in addition to the one originally described, and several nomenclature systems were developed. For practical purposes the Fisher-Race nomenclature is now used almost exclusively. Fisher and Race originally postulated that the Rh gene complex is formed by combinations of three pairs of allelic genes: Cc, Dd, Ee. This was later modified to a model that proposed a single genetic locus with three subloci. The possible combinations are: Dce, DCe, DcE, DCE,dce, dCe, dcE, and dCE. Thus a DCe/DcE individual can only pass DCe or DcE to hisoffspring and no other combination. The original antigen discovered is called D, and peo-ple who possess it are called Rh-positive. The antigen d has never been discovered, and the symbol “d” is used to denote the absence of D. All individuals lacking the D antigen are termed Rh-negative. The most frequent genotype of D-negative individuals is dca/dce.

Recent studies analyzing DNA from donors of different Rh phenotypes have found that there are neither three loci nor one locus governing Rh but that there are two structural loci governing Rh in Rh (D)-positive individuals and only one present in Rh-negative per-sons. Therefore, one gene appears to encode the D protein and the other governs the pres-ence of the C, c, E, and e antigens. Since most Rh-negative persons completely lack a D gene and have nothing in its place, and the few others appear to have a partial or inactive D gene, it is easier to understand why a d antigen does not exist.

Several other blood group systems with clinical relevance have been characterized. Most transfusion reactions other than those caused by clerical error are due to alloimmunization to antigens of the Kell, Duffy, and Kidd systems, of which the Kell system is the most poly-morphic. Occasionally antibodies to these antigens may cause hemolytic disease of the newborn. On the other hand, most cases of autoimmune hemolytic anemia involve autoan-tibodies directed to public antigens (antigens common to most, if not all, humans), such as the I antigen or core Rh antigens.

There are over 200 blood group antigens in addition to those of the ABO and Rh sys-tems. Some of the most important blood groups are seen in Table 22.2 Blood group anti-genic determinants are either carbohydrate or protein in nature. Upon exposure to foreign carbohydrate antigens, IgM antibodies are predominantly produced while IgG antibodies predominate after immunization to proteinborne blood group antigens. Many IgM anti-bodies have a low thermal amplitude (i.e., react better at temperatures below normal body temperature) and may lack clinical significance. 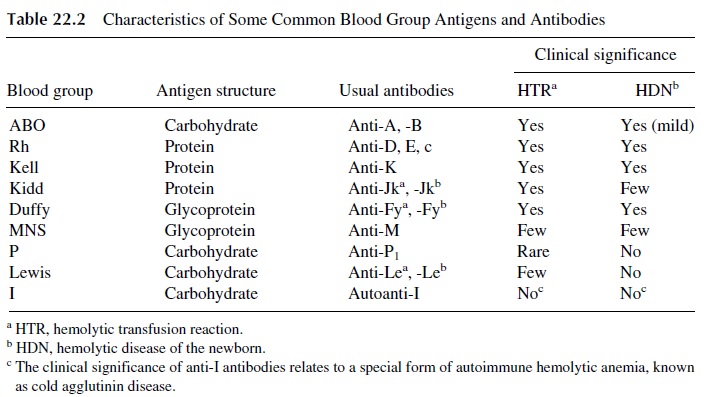 Many of the proteins recognized as blood group antigens are important to the in-tegrity of the red blood cell. This does not appear to be true of the carbohydrate antigens. Some blood groups have known associated biological functions such as the Duffy glyco-protein that is the receptor for Plasmodium vivax, which causes malaria. The Duffy glyco-protein also has recently been shown to be a chemokine receptor able to bind both C-X-C and C-C chemokines , and for this reason has been renamed as Duffy anti-gen receptor for chemokines (DARC). Its function on the mature red cell membrane is not known. Another known function of some blood groups is transport, and the Kidd protein is the urea transporter. Many carbohydrate antigens bind bacteria, for example, the P antigen, which binds Escherichia coli,and the Lewis system Leb antigen on gastric epithelial cells, which binds Helicobacter pylori, the organism implicated in gastritis, gastric ulcers, and gastric carcinoma.