A. Laboratory Determination of Blood Types

Most reagents used for blood group typing consist of monoclonal antibodies, usually of mouse origin, used individually or blended, directed against the different blood group antigens. A major advantage of the use of monoclonals is their specificity, minimizing the pos-sibility of false-positive reactions due to additional contaminating antibodies found in hu-man serum reagents. An important disadvantage derives from the fact that monoclonal antibodies react with a single epitope and the blood group antigens have multiple epitopes. Thus, individuals missing the epitope recognized by the antibody may be typed as negative. Using a blend of monoclonal antibodies, each one of them recognizing a different epitope of a given antigen, significantly reduces this problem.

Direct hemagglutination is the simplest, preferred test. It is easy to perform with typing reagents containing IgM antibodies that directly agglutinate cells expressing the corre-sponding antigen. Reagents containing IgG antibodies can also be used in a direct hemag-glutination test. Protein is added in relatively high concentration to the reagent with the pur-pose of dissipating the repulsive forces that keep the red cells apart. As a consequence, IgG antibodies can directly agglutinate the red cells.

In general, reagents containing IgG antibodies are used in an indirect antiglobulin test  as a way to induce the agglutination of red cells coated with the corresponding antibodies. The advent of monoclonal reagents has made it possible to do many typings by direct agglutination, which previously required the indirect antiglobulin test when only IgG human source reagents were available.

In 1945, Coombs, Mourant, and Race described the use of antihuman globulin serum to de-tect red cell bound nonagglutinating antibodies. There are two basic types of antiglobulin or Coombs’ tests.

The direct antiglobulin test is performed to detect in vivo sensitization of red cells or, in other words, sensitization that has occurred in the patient (Fig. 22.1). The test is performed by adding antihuman IgG (and/or antihuman complement, to react with complement com-ponents bound to the red cells as a consequence of the antigen-antibody reaction) to the pa-tient’s washed red cells. If IgG antibody is bound to the red cells, agglutination (positive result) is observed after addition of the antiglobulin reagent and centrifugation. The direct antiglobulin test is an aid in the diagnosis and investigation of:

The indirect antiglobulin test detects in vitro sensitization, i.e., sensitization that has been allowed to occur in the test tube under optimal conditions (Fig. 22.2). Therefore, the test is used to investigate the presence of nonagglutinating red cell antibodies in a patient’s serum. The test is performed in two steps (hence the designation of “indirect”):

2.           After washing unbound antibodies, antihuman IgG (and/or anticomplement) an-tibodies are added to the red cells as in the direct test. 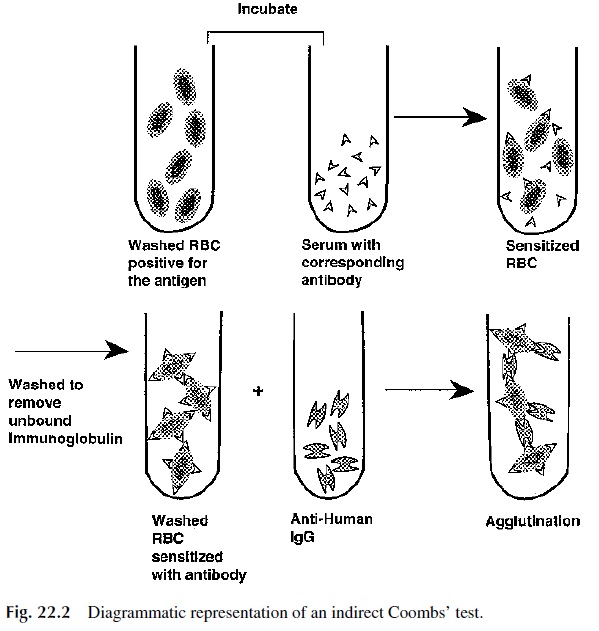 The indirect antiglobulin test is useful in:

·              Phenotyping blood cells for antigens not demonstrable by other techniques

Before a blood transfusion, a series of procedures need to be done to establish the proper selection of blood for the patient. Basically, those procedures try to establish the compati-bility between donor and recipient ABO and Rh systems and to rule out the existence of an-tibodies in the recipient’s serum that could react with transfused red cells. To establish the ABO and Rh compatibility between donor and recipient, both the recipient and the blood to be transfused are typed. To rule out the existence of antibodies (other than anti-A or anti-B), a general antibody screening test is performed with group O red cells of known com-position. The O+ cells are first incubated with the patient’s serum to check for agglutina-tion; if this test is negative, an indirect antiglobulin (Coombs’) test is performed.

The most direct way to detect antibodies in the recipient’s serum that could cause hemoly-sis of the transfused red cells is to test the patient’s serum with the donor’s cells (major  cross-match). The complete cross-match also involves the same tests as the antibody screening test described above.

An abbreviated version of the cross-match is often performed in patients with a neg-ative antibody screening test. This consists of immediately centrifuging a mixture of pa-tient’s serum and donor cells to detect agglutination; this primarily checks for ABO in-compatibility.

The minor cross-match, which consists of testing patient’s cells with donor serum is of little significance and rarely performed, since any donor antibodies would be greatly di-luted in the recipient’s plasma and rarely cause clinical problems.

If a patient has a positive antibody screening test due to a clinically significant anti-body, the antibody is identified using a panel of cells of known antigenic composition and antigen-negative blood is selected for transfusion.

Newer methods that represent alternatives to the traditional tube test are being increasingly utilized in larger blood banks. These methods require little training, offer greater standard-ization and use a micro sample. The reactions are stable and may be rechecked by another technologist.

The gel test uses six microtubes in a card, replacing six test tubes. In each microtube a column of dextran acrylamide gel particles functions as a filter that traps agglutinates upon centrifugation. This technique may be used for antiglobulin tests where gels contain-ing antiglobulin serum are used to trap sensitized but unagglutinated red cells. The red cells in a negative test will all centrifuge to the bottom of the microtube. The gel test is adapt-able to typing, antibody screening, antibody identification, and cross-matching.

Solid-phase red cell adherence tests use immobilized antibody for the direct test. The red cells to be typed are added to antibody-coated wells in a polystyrene tray. The red cells will ad-here in a monolayer across the well in a positive test but will settle to the bottom in a negative test. The indirect test uses red cells of known composition, which are immobilized in a mono-layer. In order to demonstrate that a patient’s serum has an antibody directed against a red cell sample, indicator red cells coated with anti-IgG are added after the immobilized red cells have been incubated with the patient’s serum. If the immobilized cells have reacted with the pa-tient’s antibody, the reaction with the second batch of anti-IgG-coated erythrocytes results in red-cell effacement across the well. Antibody screening and identification may be done by the indirect test. Automated solid phase techniques are being used by some blood centers.