Ingredients Needed: The main ingredi-ents in most types of the biscuits are as follows:

The relative proportions in which these ingredients are used differ accord-ing to the variety of biscuits being made. Aeration in biscuits is accomplished by means of baking powder.

According to the methods of preparation, biscuits are divided into the following types:

It is prepared by rubbing in the fat into the flour. This is done by placing the flour in a large mixing bowl, then adding but-ter which has been cut into pieces then rubbing both the ingredients together between the fingertips until the mixture resembles breadcrumbs. 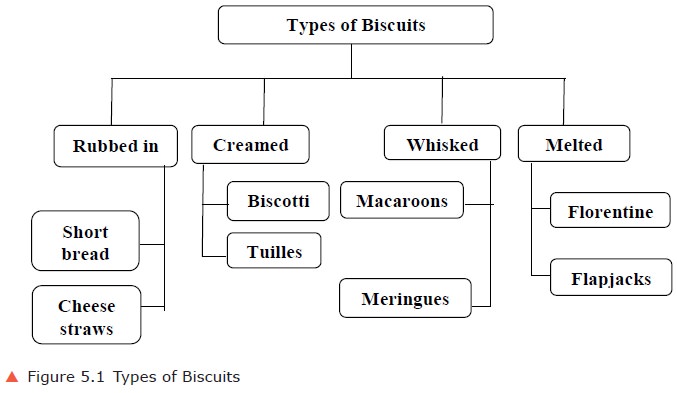 The following is a basic recipe using the rubbing in method which makes around 12 small biscuits. 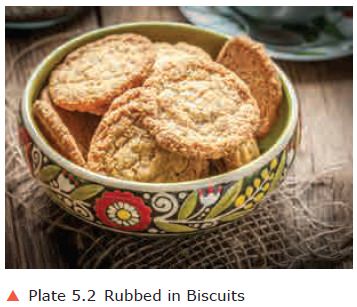 ·        Place the flour in a large mixing bowl, add the butter cubes and rub in with fingertips until the mixture resembles breadcrumbs.

·        Stir in the sugar then add the egg yolk and vanilla extract and mix to a firm dough. Add a little milk if the dough is too thick.

·        Although the dough is firm, it often ben-efits from a short time chilling in the refrigerator or in the freezer.

·        It can be rolled out to around 1cm or ½ inch thickness before being cut into shapes or can be moulded into a log, chilled or frozen well, then cut into slices

Fat and sugar should be creamed. This is done by placing softened butter in a large mixing bowl, then adding the sugar, and beating the ingredients together with a wooden spoon or electric whisk, until the mixture is well blended, light and fluffy.

Depending on the type of biscuit being made, wet ingredients such as eggs or milk are stirred in before the flour or other dry ingredients are added. These doughs are often very soft, so small spoon-fuls are dropped onto baking sheets.

The name refers to the way in which the egg content is treated. Egg whites are whisked until firm. Egg yolks/whole eggs are whisked together with the sugar until thickened and lightened.

These types of biscuits range from straight-forward whisked egg whites with added sugar in the form of light as air, meringues to more substantial biscuits such as coconut macaroons. 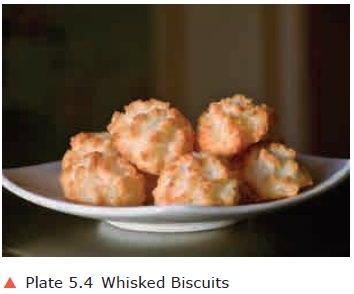 The recipes which include liquid sweet-eners like honey, golden (corn) syrup or molasses. The biscuit is prepared after melting all sweeteners (including sugar) with fat and stirred until mixed well. The other ingredients are added to the melted ingredients and mixed in the saucepan. The mixture can be soft enough to easily drop from a spoon.