·        Wheat flour contains glutelin and gli-adin as proteins which are commonly known as gluten (functional protein).

·        The strength of the wheat flour is based on the quality of gluten used.

·        The quality of baking is related to the strength of wheat.

·        Maida is the refined wheat flour which is commonly used.

Structure of Wheat: Wheat grains are composed of outer bran coats, a germ and starchy endosperm. 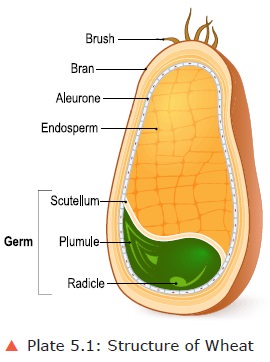 ·        It is rich in protein, phosphorous, thi-amine and also contains moderate amount of fat.

·        The aleurone layer makes up about 8 percent of the whole kernel and is lost in the milling process along with bran.

·        The endosperm consists mainly of starch and protein. But low in mineral matter, fibre, fat and vitamins.

·        This is a small structure at the lower end of the kernel and is separated from the endosperm by the scutellum.

·        Germ serves as a store of nutrients for the seed during germination. During milling some of the germ is lost along with the bran and aleurone layer.

a. Hard Wheat: Hardness is related to the degree of adhesion between starch and protein. Hard wheat yields coarse flour and is a good source of gluten. It is used to make bread flour.

d. Weak Wheat: Low protein content in weak wheat produces only a small loaf with coarse crumb structure. The flour of weak wheat is good for biscuits and cakes.

Some of the types of flours used for bak-ing are as follows:

b. Soft Flour: It is used for making all types of high quality cakes and sponge cakes.

·        A mixture of wheat flour and sodium carbonate is known as self-raising flour.

·        It is made from blend of hard and soft wheat and has a moderate protein content.

·        It is suitable for use in the yeast and quick breads, biscuits, pastries and cakes.

·        Biscuit flour is made from weak wheat of low protein content.

·        The flour should make a dough hav-ing more extensibility, but less spring (resistance) than bread dough.

·        The extensibility of biscuit flour dough may be increased by the addition of sodium metabisulphite to the dough.

·        Dough pieces should retain the size and shape after being stamped out.

·        This flour allows the aerated structure to be retained after the cake has been built up.

g. Pastry Flour: Pastry flour is made of soft wheat which is fairly low in protein.

c.      Steam obtained from heating of the dough in the oven

d.     Air in a dough or batter expands in the oven while heated

Yeast: Two forms of yeast used in baking are

In the bread making process yeast ferments simple sugars and produces car-bon-di-oxide and alcohol. The increase in fermentation rate with time is due to two conditions in a dough.

a.     Yeast cells are multiplying and the enzymes are becoming more active while the dough is prepared and held.

b.     Sugar for fermentation is gradually being liberated from starch in the dough by the action of natural flour enzymes.

·        It adds flavour, colour and increases the nutritive value of the baked product.

·        Egg white contains protein. When whipped it forms films and entraps air. On heating it coagulates to produce rigidity.

·        Butter, margarine and hydrogenated oils are the most common shortenings used in baking.

·        It melts and releases air bubbles which will help in the leavening action of baking powder and expanding steam.

·        It is necessary for yeast growth and indirectly­ aids the fermentation process­.

·        Brown colour of the crust is due to the Maillard reaction between the protein and sugar which occurs during baking.

Milk powder and skimmed milk are used in bread and bun making. It increases the nutritive value of bread. It improves fla-vour and gives a brown crust.

Oxidising agents like potassium bromate, potassium iodate and calcium peroxide are used to improve the handling characteristics of the dough and spe-cific volume and texture of the finished products.

Salt has a retarding effect on yeast fermentation. Salt is used as a taste enhancer and as a preservative.

Water is important for gluten ­formation. It dissolves sugar and salt and serves as a dispersion media for yeast cell.