The selection of controller (converter) depends upon the application. One of the main aspects of the research in SRM drives has been the converter design. The main objectives of the design of the converter are performance of the drive and cost of the drive.

Similarly phase winding B & C are also switched on to the supply and switched off from the supply in a cyclic manner. This circuit requires 2 power switching devices and 2 diodes for each phase winding. For high speed operation it is required to see that the stored energy can be fed back to the mains within the available period.

Usually the upper devices T1, T3 and T5 are turned on and off from the signals obtained from the rotor position sensor .The duration of conduction or angle of conduction θ can be controlled by using suitable control circuitry .The lower devices T2, T4, T6 are controlled from signals obtained by chopping frequency signal. The current in the phase winding is the result of logical AND ing of the rotor position sensor and chopping frequency .As a result it is possible to vary the effective phase current from a very low value to a high value .For varying the following methods are available.

1. By varying the duty cycle of the chopper.

2. By varying the conduction angle of the devices.

v   Control of each phase is completely independent of the other phase.

v   The energy from the off going phase is feedback to the source, which results in utilization of energy

v   Higher number of switches required in each phase, which makes the converter expensive and also used for low voltage applications. 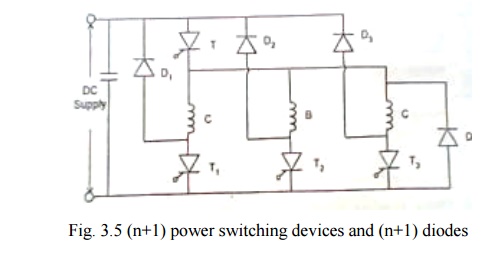 This circuit makes use of (n+1) power switching devices and (n+1) diodes where n is equal to the number of phases.

v   The converter uses low number of switching devices, which reduces the cost of the converter.

v   The converter is able to freewheel during the chopping, thus reducing the switching frequency and losses.

v   Voltage rating of all the switching devices and the diodes are V dc, which is relatively low.

v   The energy for the off going phase is transferred back into the source, which results in useful utilization of the energy and also improves the efficiency.

v   Disability to magnetize a phase while the off going phase is still demagnetizing which results in higher torque ripple during commutation.

v   At higher speeds of the off going phase cannot be de-energized fast enough because the common switch ―T‖ keeps turnings on intermediately, disabling forced demagnetization.

v   The common switch conducts for all the phases and thus has higher switching stress.

Each phase winding has two exactly similar phase windings as shown in fig 3.6.For this bifilar wires are used .Each phase consists of two identical windings and are magnetically coupled when one of them are excited.

In stepper motor, the purpose of bifilar winding is for bipolar excitation with a reduced number of switching elements. 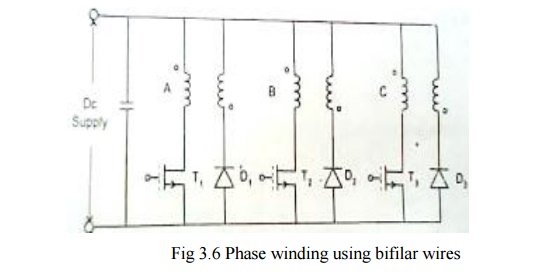 v   The converter uses lower number of switching devices thus reducing the cost on the converter.

v   The converter allows fast demagnetization of phases during commutation.

v   A poor utilization of copper.

v   The imperfection in the coupling between the two winding causes voltage spikes during turn off.

v   The copper loss associated with the auxiliary winding is unacceptable high for many applications. 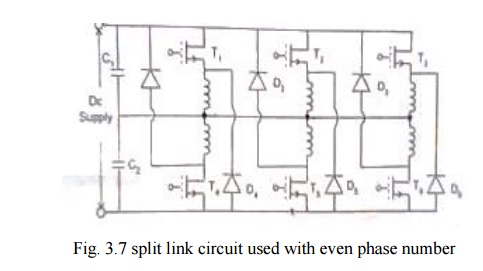 The circuit shown in fig.3.7 is used in a range of highly efficient drives (from 4-80kw).

v   During chopping, freewheeling is not possible as the phaser have the voltage Vdc/2. This causes higher switching frequency and more losses.

v   This is not feasible for low voltage application.

v   The converter is fewer faults tolerant as fault in any phase will unbalance the other phase that is connected to it.

In the C dump circuit shown in fig. 3.8. the device count is reduced to ‗n‘ plus one additional devices to bleed the stored energy from the dump capacitor C back to supply via the step down chopper circuit. The mean capacitor voltage is maintained well above the supply to permit rapid defluxing after commutation.

A control failure in the energy-recovery circuit would result in the rapid build-up of charge on the capacitor and if protective measures were not taken the entire converter could fail from over voltage.

v   Dump capacitor voltage is maintained ―2 Vdc‖ to allow fast demagnetization. But use of a capacitor and an inductor in the dump circuit and also the voltage rating of other devices is twice the bus voltage

v   Monitoring of the dump capacitor voltage 'C‘ and control of dump switch T makes the converter very complicated and also the converter does not allow freewheeling.