In the developing anther the primary sporogenous cells, which are derived from the same initials as the primary parietal cells, give rise either directly or by successive mitotic divisions to the microspore parent cells (microsporocytes).

Following meiosis, the tetrad normally fragments into indivi-dual microspores, though in some families (e.g. Winteraceae) the microspores typically remain together as permanent tetrads. Prior to anthesis, each microspore undergoes an unequal (asymmetric) mitosis to form a larger vegetative cell and a smaller generative cell enclosed within the pollen grain wall. The generative (spermato-genous) nucleus later undergoes a further mitosis (spermatogen-esis) to form two sperm cells, either in the pollen grain or in the pollen tube. The microgametophyte is therefore either bicellular or tricellular. Spermatogenesis is itself asymmetric in some angiosperms (e.g. Plumbago and Zea), in which dimorphic spermare produced that can preferentially fertilize either the egg nucleus or the polar nuclei in the embryo sac. 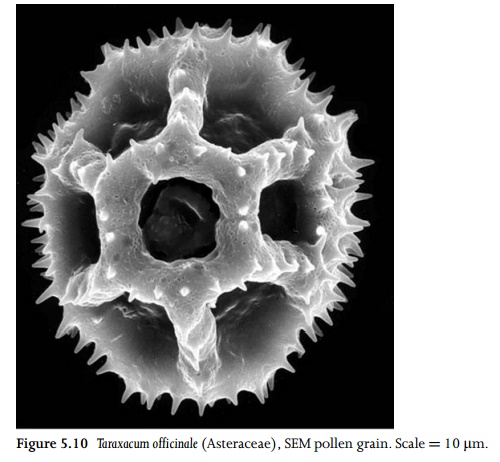 Pollen grains are radially or bilaterally symmetrical bodies that represent units of dispersal from the anther to the stigma (Fig. 5.10). They vary considerably in size and shape among species29. The pollen-grain wall consists of two distinct domains: a hard outer exine, which is composed mainly of sporopollenin (a carotenoid polymer), and a relatively soft inner intine com-posed of polysaccharides. The exine is itself a layered structure, often differentiated into an outer sculptured ectexine (sexine) and an inner non-sculptured endexine (nexine), though endexine is normally well-developed only in eudicots with tricolpate pollen.

Apertures are often present in the pollen-grain wall, though pollen grains of some species lack a clearly defined aperture (termed inaperturate pollen). Apertures represent specialized regions in which the outer layer (the exine) is reduced or absent, and the underlying layer (the intine) is thickened. They range in shape from elongated furrows to roughly circular pores. Some apertures possess a lid-like operculum. Apertures that lie along the distal face of the pollen grain (normally the face that was directed outwards in the tetrad) are termed sulci. Sulcate pollen grains are characteristic of monocots and magnoliids. Apertures that lie along the equatorial face of the pollen grain, as defined during the tetrad phase, are termed colpi. Pollen with three equatorial apertures (tricolpate pollen) characterizes the eudicots (sometimes termed the tricolpates). In many eudicots, microspore tetrads are tetrahedral with three apertures (colpi) arranged equidistantly around the equator of the microspore. Colpi are typically elongated and slit-like, but can occasionally be reduced to pores, and in some eudicot species the number can increase to four, five, six, or more. In spiraperturate pollen grains (e.g. some Crocus species) the aperture spirals around the grain.

Pollen grains dehydrate after contact with the air, and the exine contracts. Subsequently, rehydration and exine expansion occurs on the stigmatic surface. Dry and hydrated pollen grains of the same species can appear very different in size, shape and even surface features. There are many different patterns of exine sculp-turing. For example, the exine may be reticulate or areolate, or it may possess surface holes (puncta), granules, warts or spines.

These differences are often of considerable taxonomic signifi-cance. The surface patterning is a mechanical adaptation, either ensuring elasticity of the wall or helping to accommodate changes in pollen shape associated with hydration and subsequent increase in cytoplasmic volume (harmemogathy). Wind-borne pollen grains are generally small and light, and possess relatively little surface sculpturing. Water-dispersed pollen often possesses adap-tations such as a slime coating (e.g. in Hydrocharitaceae).

In some species with animal-dispersed pollen, substances such as lipids, proteins and carbohydrates are stored and dispersed with the pollen in the intercolumellar spaces of a deeply-chambered exine. The substances are normally derived from the tapetum. They have various functions, such as conferring odour, or causing grains to aggregate into sticky masses, which is useful for effec-tive animal dispersal. In some species (e.g. many Brassicaceae, Malvaceae and Asteraceae48), exine-borne substances are released onto the stigma when the exine expands after pollen grain rehydration, and hence play a role in the control of interspecific compatibility.