Home | | Anatomy of Flowering Plants: An Introduction to Structure and Development | Floral Secretory Structures
Posted On :  11.06.2017 11:54 am

Many flowers bear specialized secretory structures, such as nectaries, elaiophores and osmophores.

Many flowers bear specialized secretory structures, such as nectaries, elaiophores and osmophores. These secrete nectar, oil and scent respectively, to attract potential pollinators, including insects such as bees and moths, and also vertebrates such as humming birds and bats.

Nectaries are localized areas of tissue that regularly secrete nectar, a sugar-rich substance that is attractive to animals. Nectaries usually consist of secretory epidermal cells with dense cytoplasm, sometimes modified into trichomes. Adjacent sub-epidermal cells may also be secretory, and in some cases nectar passes to the surface through modified stomatal pores.

Vascular tissue close to the nectary often consists mainly or entirely of phloem, which transports sugars to the secretory region.

Nectaries may occur on any floral organ, or they may represent an entire modified organ, or even a novel structure. Most species of the mint family (Lamiaceae) possess an enlarged nectariferous disc surrounding the base of the ovary (Fig. 5.5), which is derived from developing ovary tissue. In most Brassicaceae (e.g. Arabidopsis thaliana) the nectary is located at the base of the stamen filament (Fig. 5.1). Septal nectaries are characteristic of many monocots; these occur at the unfused carpel margins in monocots with postgenitally fused ovaries (Fig. 5.12). Nectar produced from septal nectaries is exuded from secretary epidermal cells and emerges from small pores or slits on the surface of the gynoecium. 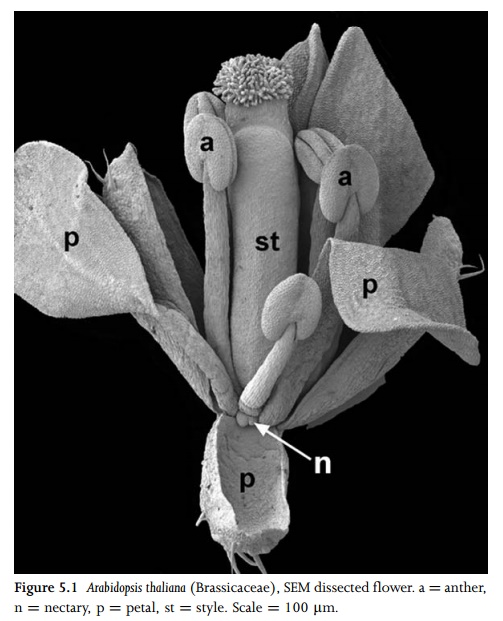 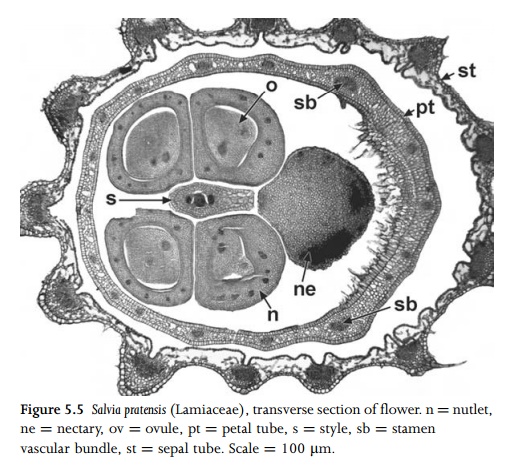 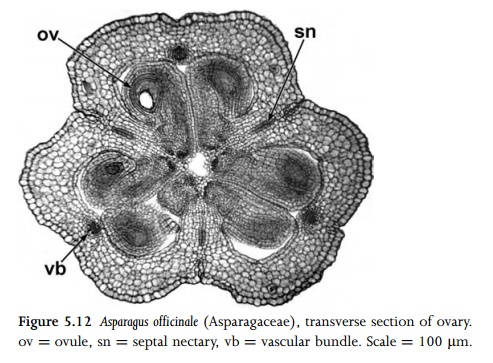 Flowers of some insect-pollinated species lack nectaries, but possess other secretory structures that attract potential pollinators. For example, some flowers bear oil-secreting glands, termed elaiophores (Fig. 5.17), which are morphologically similar to some types of nectary. Osmophores are modified floral 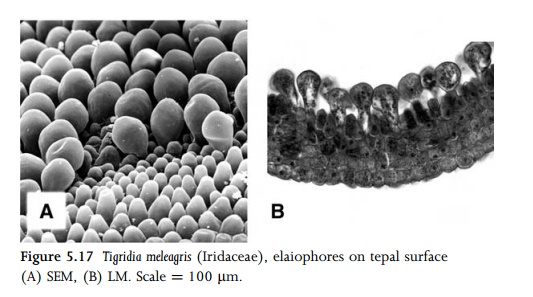 structures that produce volatile secretions (scents); in some orchids the odours are pheromone-like substances. Osmophores typically possess a relatively thick, domed or papillate epidermis with densely cytoplasmic contents. In Platanthera bifolia the epi-dermis of the labellum secretes a nocturnal scent, and in Ophrys species osmophores on the labellum consist of areas of dome-shaped, papillate, dark-staining epidermal cells. Flowers of Narcissus emit pollinator-specific volatiles that are probably derived from the colourful corona.