The carpels are the ovule-bearing (female) organs. Collectively they form the gynoecium, which consists of an ovary, style(s) and stigma(s). In

Stigmatic epidermal cells provide a receptive surface for pollen grains (Fig. 5.11). They are typically secretory, with a specialized cuticle, and may be slightly domed or possess variously elongated papillae. Stigmas of some species possess little or nosurface secretions (termed dry stigmas), whereas ‘‘wet’’ stigmas exude copious surface secretions that play a role in pollen recogni-tion and germination. The stigmatic cuticle is often stratified in transverse section, with a lamellated outer layer and reticulate inner layers. Some Crocus species possess a chambered cuticle, and in some Euphorbia species the cuticle is fenestrated. 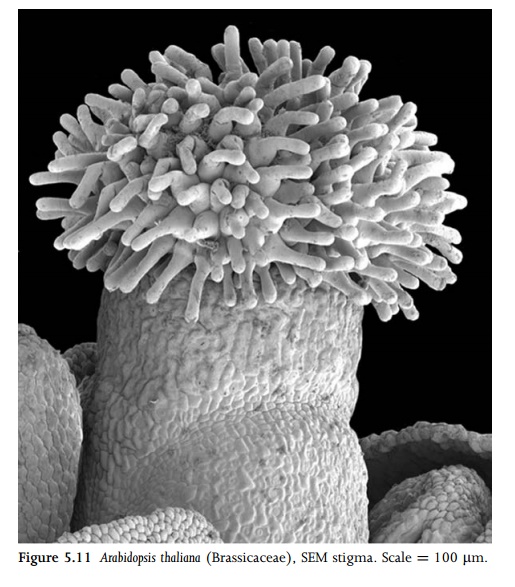 Rarely, the stigma is borne directly on the top of the ovary, but most commonly it is borne on a style. The ground tissue of the style is parenchymatous, and it typically possesses two or 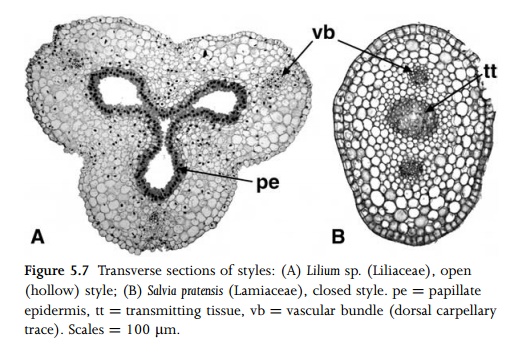 three dorsal carpellary traces, depending on the number of carpels. Many syncarpous eudicots possess ‘‘solid’’ styles, in which there is a central specialized secretory tissue, the transmitting tissue, that links the stigma with the centre of the ovary, and serves as a nutrient-rich tract for pollen-tube growth110 (Fig. 5.7). The transmitting tissue is derived from superficial carpellary tissue of the fused carpel margins. By contrast, most syncarpous monocots and some eudicots (e.g. Acer saccharum81) possess ‘‘open’’ styles with a central stylar canal that is often filled with mucilage (Fig. 5.7), though grasses possess solid styles with a dense central trans-mitting tissue.

In many syncarpous species there is an opening (compitum) at the base of the style that allows the pollen tubes to reach any of the ovules in the ovary locules. The ovary contains one or more ovules (Fig. 5.12). Each ovule is attached to the ovary wall at a placenta. The arrangement of the placentae and the numbers of carpels and ovary locules vary in different species. In many syncarpous species the numbers of ovary locules and carpels are equivalent, but this can vary; for example in most orchids the ovary is syncarpous, tricarpellary and unilocular.

Ovules are borne on placentas, which are meristematic regions borne at the carpel margins within the ovary locules. The arrangement of the placentas (placentation) varies among species. In species with two or more locules in which the ovules are borne on placentas in the central axis, placentation is axile. Parietal placentation occurs in some species with unilocular ovaries, though false septa occur in some species. Other placent-ation types occur in unilocular ovaries; for example, the placentas can be at the base of the ovary (basal placentation), or on top of a central column of tissue that is not joined to the ovary wall except at top and bottom (free central placentation).

Many species possess proliferations of secretory tissue around the bases of the funicles, providing nutrients for the devel-oping pollen tubes and guiding them into the micropyles. These structures, termed obturators, are derived either from the placenta or the funicle, and are frequently papillate.