Ovule primordia are initiated as small swellings in the placenta. The ovule consists of a nucellus, which bears the embryo sac, enclosed by one or two (inner and outer) integuments .

Ovule primordia are initiated as small swellings in the placenta. The ovule consists of a nucellus, which bears the embryo sac, enclosed by one or two (inner and outer) integuments (Figs 5.13 5.15). The region where the nucellus, integuments and funicle unite is termed the chalaza (Fig. 6.1). The micropyle is a narrow opening in the ovule formed by one or both integuments, located at the opposite end of the embryo sac to the chalaza. At anthesis, each ovule is attached to the ovary by a funicle, which normally possesses a single vascular strand. The vascular bundle in the funicle usually terminates at the chalaza, but in some species it is more extensive. 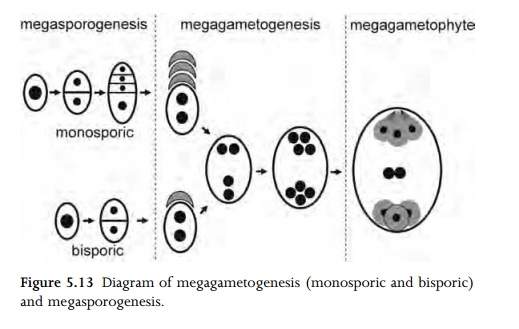 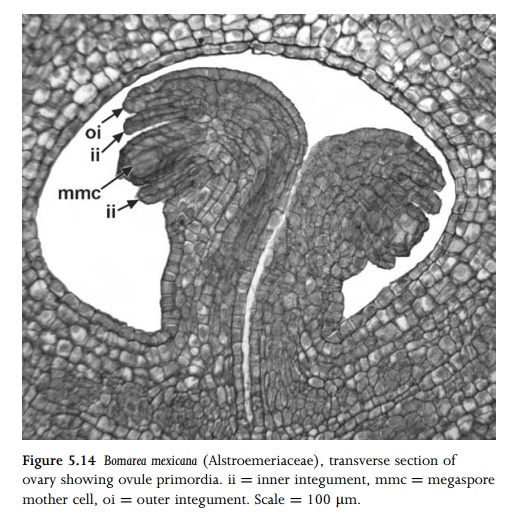 The nucellus arises from the apex and body of the ovule primordium. The integuments develop from around the primor-dium base and encircle its apex, forming the micropyle; normally the inner integument is initiated before the outer. The possession of two integuments is the most common condition in angio-sperms, but a single integument characterizes some eudicots, and a few species lack integuments entirely16. Prior to formation of the archespore, the ovule primordium is organized into either two or (more commonly) three distinct zones defined by orienta-tion of cell division. The outermost (dermal) layer initially undergoes mainly anticlinal divisions, but may later proliferate at the micropylar end to form a nucellar cap, and sometimes also proliferates around and below the embryo sac. The archespore forms in the subdermal layer, immediately subtended by the central zone. 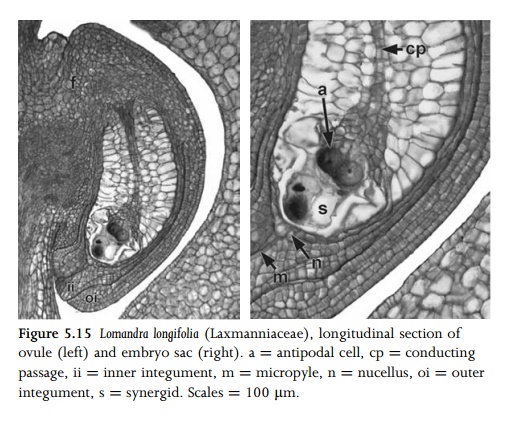 In some species the nucellus proliferates in the central zone to form a hypostase, which is a chalazal region of often refractive and suberinized or lignified tissue. For example, a large hypostase is present in Acorus and Crocus. Sometimes other specialized structures are formed in the central zone of the nucellus, such as a postament or conducting passage (Fig. 5.15); these often persist after fertilization. The dermal nucellar cells surrounding the embryo sac often break down before (or shortly after) fertili-zation, in which case the innermost epidermal layer of the inner integument is sometimes differentiated to form an endo-thelium or integumentary tapetum (Fig. 6.6). Endothelium cells are frequently enlarged and densely cytoplasmic, and sometimes endopolyploid; in some species they have a secretory function. 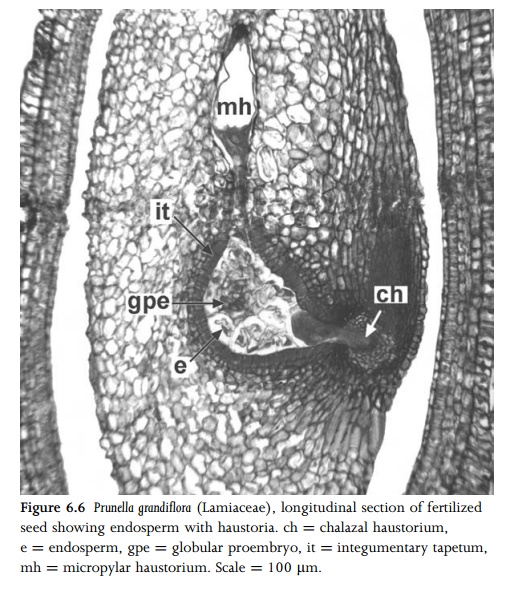 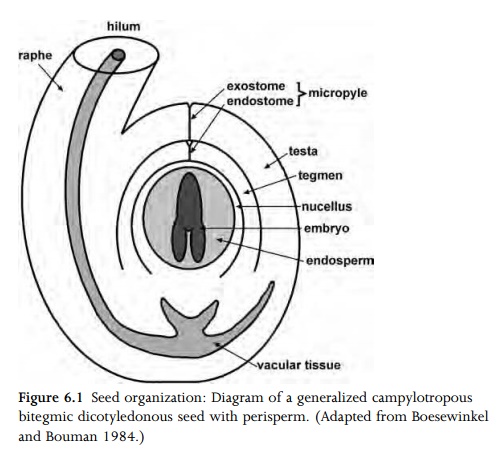