Pollen tubes emerge from a pollen grain that has landed on a conspecific receptive stigma, normally via an aperture in the exine.

Pollen tubes emerge from a pollen grain that has landed on a conspecific receptive stigma, normally via an aperture in the exine. The pollen-tube wall is initially formed from the innermost  (cellulosic-callosic) layer of the intine; in some species this isthen locally dissolved and replaced by an emergent outgrowth of the plasma membrane of the vegetative cell. 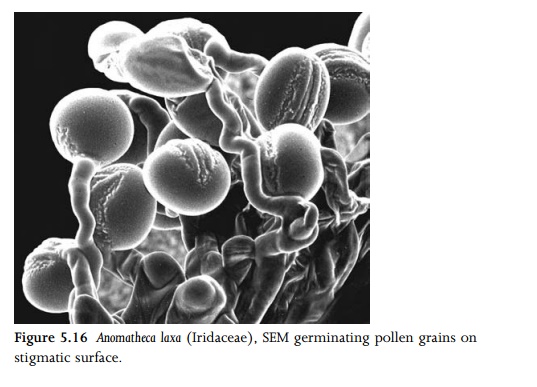 The pollen tube grows at the apex, leaving an attenuated, loosely-arranged microfibrillar wall interspersed with polysac-charide particles. Germinating pollen tubes (Fig. 5.16) grow towards the ovules either intrusively between cells of transmitting tissue (in solid styles) or over a layer of mucilage (in hollow styles). They obtain nourishment (polysaccharides and proteins) from the richly cytoplasmic transmitting tissue (in solid styles) or the glandular epidermis (in hollow styles), and subsequently from specialized secretory tissues such as the obturator or the outer integument of the ovule.

Pollen tubes, though typically unbranched, can become branched in some species (e.g. Grevillea), in which one (siphono-gamous) branch enters the micropyle and other (presumably haustorial) branches invade adjacent ovary or ovule tissue.

Further remarkable examples of the intrusive abilities of pollen tubes are provided by rare cases in which pollen germinates prior to anther dehiscence and pollen tubes grow through the anther filament tissue and enter the female tissue at the receptacle, thus bypassing the stigma (e.g. in the monocot Sagittaria, the eudicot family Malpighiaceae and a gametophytic Arabidopsis mutant1,58,120). Some angiosperms (e.g. Lavatera) exhibit polysiphony: multiple (15 20) pollen tubes emerge from a single region of the grain on the side in contact with the stigma, though only one tube bears the sperm.

When the pollen tube reaches an ovule, it enters through the micropyle and discharges the male gametes (sperm cells) before collapsing. One sperm enters the haploid egg cell and the other the diploid central cell, and nuclear fusion ensues, resulting in a diploid zygote and a triploid primary endosperm nucleus. This process, termed double fertilization, is one of the main characteristics of the angiosperms. Subsequently, the zygote and primary endosperm nucleus divide to form the embryo and endosperm respectively.