In their simplest form, perianth parts are essentially leaf-like in morphology, though there are many modifications.

In their simplest form, perianth parts are essentially leaf-like in morphology, though there are many modifications. Sepals are typically green and photosynthetic; it is common to find stomata and trichomes on sepal surfaces. In insect-pollinated plants the petals are typically the largest and showiest part of the flower, though in wind-pollinated plants the petals are sometimes reduced or even absent. Flower colour is largely controlled by the chemistry of the diverse pigments present. Anthocyanins, beta-lains and ultraviolet-absorbing flavonoids are largely confined to the epidermal cells of the petal, whereas other pigments, such 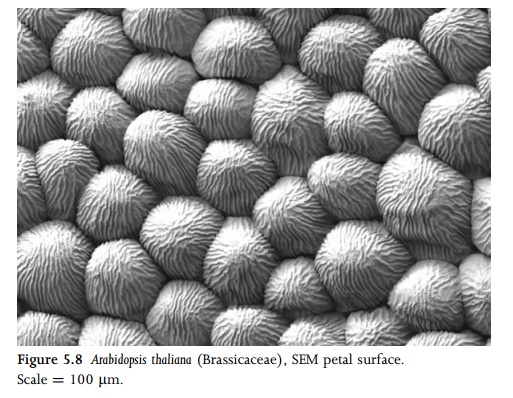 as carotenoids, occur in either the epidermis or the mesophyll. Petal surfaces frequently lack stomata and the epidermal cells are often domed or papillate (Fig. 5.8), with papillae of various heights and either one or several per cell. The effect of the domed cell surface is to guide incident light into the petal, where it is reflected outwards from the inside walls of the epidermal cells or from the multi-faceted walls of mesophyll cells, thus passing through the pigments in solution in the cell vacuoles. Many petal surfaces are also strongly striated, which may have the effect of further scattering the incident light into the interior of the petal. By contrast, some petal surfaces are smooth (e.g. in Crocus), in which case incident light is reflected strongly. In some species of Ranunculus with bright yellow flowers, incident light is reflected from starch grains in the subepidermal mesophyll cells.

Both petals and sepals consist of an abaxial and adaxial epidermis enclosing usually three or four (or more) layers of undifferentiated isodiametric or elongated cells separated by many air spaces. This mesophyll tissue is interspersed with a row of vascular bundles. As in leaves, some petals and sepals contain idioblasts such as crystal cells, or specialized tissues such as a hypodermis.