Photosynthetic pigments and the nature of light

Sunlight is made up of high-energy photons that can energize molecules capable of absorbing their energy. Light can also be described as a wave motion, with the longest wavelengths having the lowest energy.

PHOTOSYNTHETIC PIGMENTS AND THE NATURE OF LIGHT

The nature of light

Sunlight is made up of high-energy photons that can energize molecules capable of absorbing their energy. Light can also be described as a wave motion, with the longest wavelengths having the lowest energy.

Chlorophyll a is the major photosynthetic pigment. It has a porphyrin ring structure containing a central magnesium atom and a long hydrocarbon tail. Accessory pigments pass their harvested energy to chlorophyll a. Blue and red light are absorbed most. Absorption of light energizes an electron in the chlorophyll, the energy being transferred to an electron acceptor.

The nature of light

The energy for photosynthesis is derived from sunlight, which originates from the exothermic reactions taking place in the sun. Light has the properties of both a wave motion and of particles (photons or quanta). The amount of energy contained in a photon is inversely proportional to the wavelength, short wavelengths having higher energy than long wavelengths. In order to photosynthesize, plants must convert the energy in light to a form in which it can be used to synthesize carbohydrate. 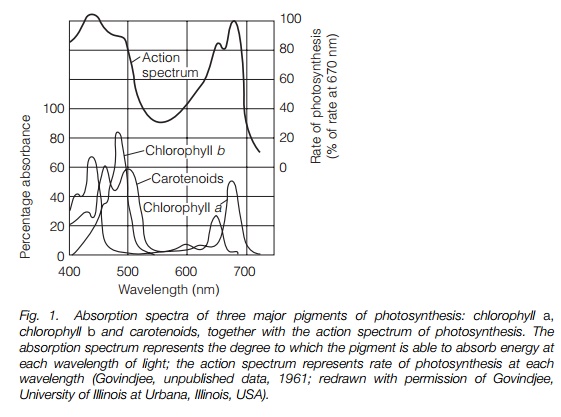 When a chlorophyll molecule is struck by a photon, it absorbs energy. This energizes an electron within the chlorophyll that may be used in photosynthesis or return to its original energy state with a loss of heat and transmission of light of lower wavelength.

The major photosynthetic pigments are the chlorophylls (Fig. 2). A chlorophyll molecule is made up of a ‘head’ group, a nitrogen-containingporphyrin ring structure, with a magnesium atom at its center, and a tail of hydrocarbons, which anchors the molecule to a membrane. Chlorophyll a is the main pigment of photosynthesis. Most chloroplasts also contain accessory pigments, pigments that broaden the range of wavelengths at which light can be absorbed and that pass the energy obtained to chlorophyll a or protect against damage. Chlorophyll b, carotenoidsand xanthophylls are examples of these pigments.

To harvest the energy of light, the pigments of photosynthesis must be arranged so that the energy is focused to a point from which it can be used. Energy absorbed by the pigment molecules is transferred to one of a central pair of chlorophyll a molecules (termed the reaction center chlorophylls) by resonance energy transfer (Fig. 3). From here, the high energy electron is passed on to an electron acceptor. The pigments are arrayed in flat sheets in the thylakoidmembrane, orientated to capture the incoming radiation. Each reaction center issurrounded by 200–400 pigment molecules, theantenna complex, and thewhole structure constitutes a photosystem. The thylakoids are stacked in grana held within the stroma of the chloroplast . 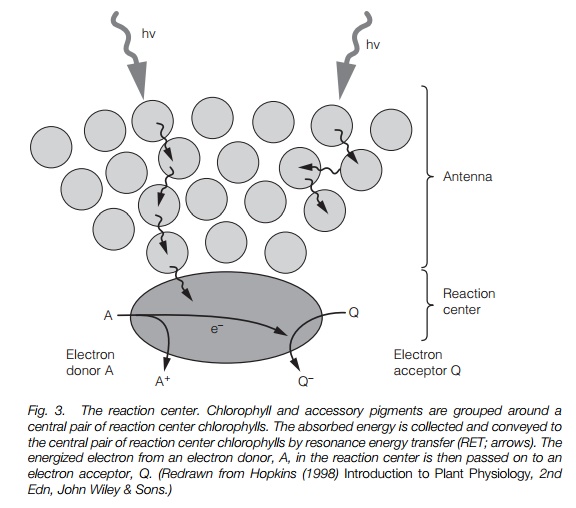