The energy of light is used to energize electrons in the reaction center chlorophyll molecules of a photosystem. The electrons are then passed on to an electron transport chain.

The energy of light is used to energize electrons in the reaction center chlorophyll molecules of a photosystem. The electrons are then passed on to an electron transport chain. The missing electrons in the reaction center are replenished when 2H2O is split to O2 , 4H+ and 4e–. The electron moves through the electron transport chain until it energizes the cytochrome b/f complex to pump protons into the thylakoid lumen and is then passed to photosystem I (PS-I) where it is re-energized and passed to NADP reductase, generating NADPH. PS-I can also function alone to transport H+. Adenosine triphosphate (ATP) is generated by H+ passing through the enzyme ATP synthase located in the thylakoid membrane. The two products of the light reactions are therefore NADPH and ATP.

The carbon fixation reactions (Calvin cycle) in the stroma of the chloroplast uses ATP and NADPH to fix CO2 as carbohydrate in a cyclic process which does not directly require light. The cycle involves (i) carboxylation, in which Ribulose bisphosphate carboxylase/oxygenase(Rubsico) carboxylates 5-carbon ribulose bisphosphate using CO2 to give a transient 6-carbon compound, which forms two molecules of 3-carbon 3-phosphoglycerate; (ii) reduction, where NADPH and ATP are used to form two molecules of glyceraldehyde 3-phosphate; and (iii) regeneration, where one molecule of 3-carbon glyceraldehyde 3- phosphate is converted to 5-carbon ribulose bisphosphate using ATP.

Overall, fixation of three molecules of CO2 requires 6NADPH and 9ATP and leads to the net synthesis for export of one glyceraldehyde 3- phosphate.

Ribulose bisphosphate carboxylase/oxygenase also has oxygenase activity which generates 3-phosphoglycerate and 2-phosphoglycolate.The overall efficiency of photosynthesis is decreased by about 25% as aconsequence. The photorespiratory cycle partially recovers the fixed carbon and involves the peroxisomes and mitochondria. It results in the loss of CO2 and the use of ATP to convert the 2-phosphoglycolate to 3- phosphoglycerate which is converted to ribulose 1,5-bisphosphate by the Calvin cycle.

In photosystem II (PS-II)  a pair of electrons energized by light are passed from the reaction center chlorophyll to an electron transport chain. These electrons are replaced by a unique process called photolysis in which water is oxidized to yield molecular oxygen. The overall reaction, termed the S statemechanism is as follows:

It requires manganese and is energized by PS-II. The protons generated are released into the lumen of the thylakoid. The high energy electrons are captured by an electron acceptor and passed on to the P680 chlorophyll (the reaction center chlorophyll in PS-II, having an absorption maximum at 680 nm;).

The electrons then move through an electron transport chain located in the thylakoid membrane. The first stage is plastoquinone, a quinone molecule which is able to move within the membrane. Plastoquinone accepts two electrons and two protons to form PQH2. The electrons are then passed to the cytochrome b/f complex. This is a proton pump and pumps H+ into the thylakoid lumen (Fig. 1). The electron is then transferred toplastocyanin, a copper-containing protein that accepts electrons, by the copper cycling between Cu2+ and Cu+ that then supplies it to PS-I. It is energized again by light and transported by another electron acceptor, ferredoxin, a protein. The electron is then passed on to the enzyme nicotinamide adenine dinucleotide phosphate (NADP) reductase, that reduces NADP+ to nicotinamide adenine dinucleotide phosphate (reduced form; NADPH). Overall, two photons absorbed by PS-II result in: the oxidation of a water molecule to give O2 and the release of H+ into the lumen of the thylakoid; the formation of NADPH by the reduction of NADP+; and the transport of H+ into the lumen of the thylakoid via the cytochrome b/fcomplex. The process, known as non-cyclic electron flow, 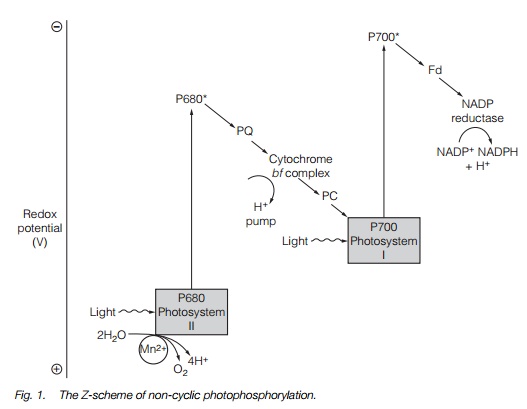 produces NADPH and a proton gradient across the thylakoid membrane. NADPH is used directly in the Calvin cycle (below). The proton gradient is used to drive adenosine triphosphate (ATP) synthase, the enzyme that makes ATP. 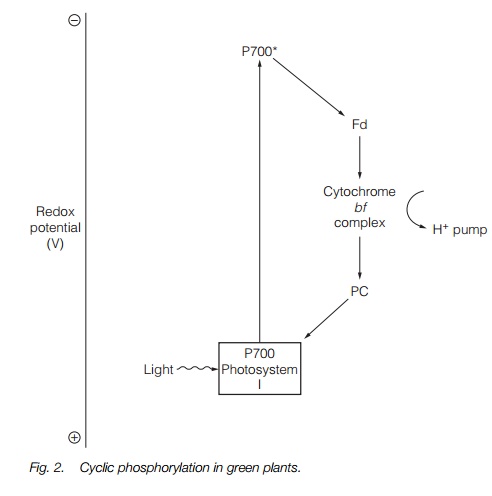 The second photosystem, PS-I, can work independently of PS-II. This occurs when electrons are transferred from cytochrome b/f back to P700 via plastocyanin and re-energized by light. This process, termed cyclic electron flow is illustrated in Fig. 2. As the electrons never reach NADP reductase, the system only generates a proton gradient. 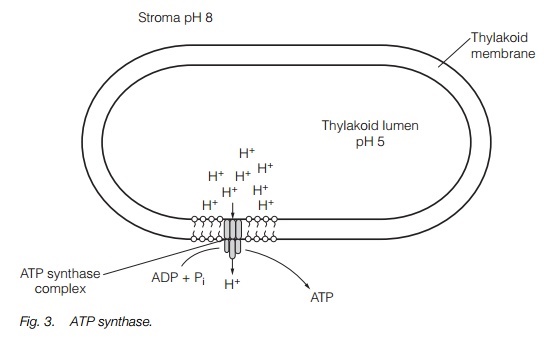 ATP is produced by ATP synthase (Fig. 3). This is a large protein complex located in the thylakoid membrane. As the protons flow down the electrochemical gradient from the thylakoid lumen into the stroma, the energy is used to synthesize ATP by the phosphorylation of adenosine diphosphate (ADP) by the ATP synthase complex. ATP synthesis driven by cyclic electron flow (PS-I only) is termed cyclic photophosphorylation, while ATP synthesis driven by noncyclic electron flow (PS-I and PS-II) is non-cyclic photophosphorylation.

The process involves two enzymes, 3-phosphoglycerate kinase and NADP glyceraldehyde-3-phosphate dehydrogenase. In the first enzymatic reaction,one mole of ATP is used and in the second, one mole of NADPH is used foreach mole of 3-phosphoglycerate. Glyceraldehyde-3 phosphateis a 3-carbonsugar, some of which is used in the next stages of the cycle and some removedas the product of the cycle (Fig. 4). 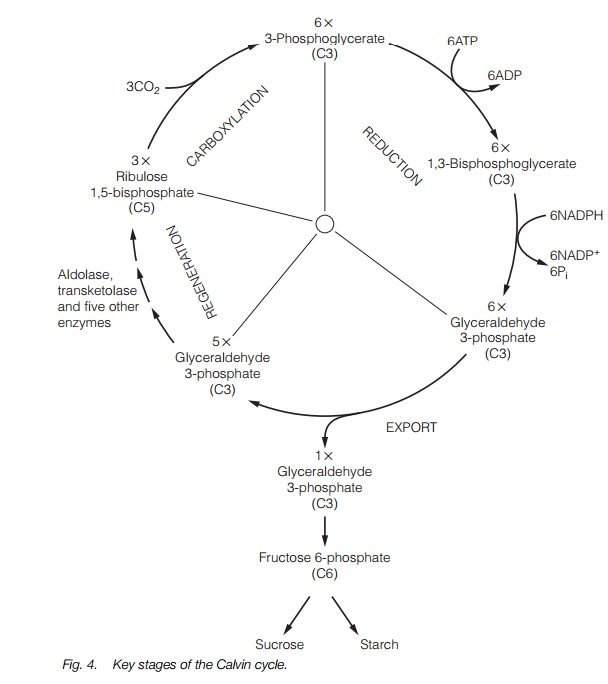 Rubisco can either carboxylate ribulose bisphosphate, giving 3-phosphoglycerate or can oxygenate it to give a 2-carbon sugar 2-phosphoglycolate and a 3-carbon sugar 3-phosphoglycerate (Fig. 5). In equal concentrations of CO2 and O2, carboxylation is favored over oxygenation by about 80:1; however, at ambient CO2 concentrations, the ratio falls to 3:1. The rate of assimilation of carbon by a leaf is therefore the result of two opposing pathways; the Calvin cycle and photorespiration. The overall effect of photorespiration is a reduction of about 25% in carbon assimilation. 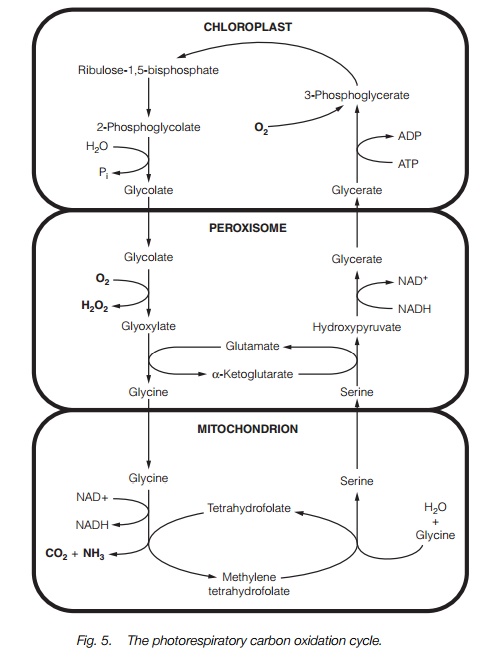 3-phosphoglycerate is salvaged for carboxylation by the Calvin cycle (see above), but recovery of the phosphoglycolate requires the enzymes of the photorespiratory cycle which are located in peroxisomes  and mitochondria . The stages are shown in Fig. 5. Overall, the pathway consumes oxygen and ATP; equal amounts of NADH are used up in the peroxisomeand produced in the mitochondrion.

The function of photorespiration is unknown; it may be a consequence of the structure and reaction mechanism of Rubisco; alternatively, it may be a safety mechanism to protect the photosystems in conditions where light intensity is high and carbon dioxide low. Some plants show a modified form of photosynthesis termed C4 in which photorespiration does not occur .