Starch is the major carbohydrate storage product of most plants. It is broken down to 6-carbon sugars by either hydrolytic or phosphorolytic enzymes. Products are exported from the chloroplast to the cytosol for glycolysis.

Starch is the major carbohydrate storage product of most plants. It is broken down to 6-carbon sugars by either hydrolytic or phosphorolytic enzymes. Products are exported from the chloroplast to the cytosol for glycolysis.

Glycolysis breaks glucose (6C) to two molecules of pyruvate (3C). Two molecules of ATP are used and four formed, giving a net yield of 2ATP and 2NADH. In anaerobic conditions, pyruvate is fermented to ethanol and carbon dioxide, with no further ATP production and use of the NADH.

In aerobic conditions, pyruvate binds to coenzyme A (CoA) and enters the citric acid cycle as acetyl CoA. In total, the 3C sugar yields three CO2, one ATP, three NADH and one FADH2. As each glucose molecule supplies two 3C sugars, it takes two turns of the cycle to fully oxidize glucose.

NADH and FADH2 supply energized electrons to the electron transport chain in the mitochondrial inner membrane. The electrons are carried through the chain and result in the pumping of protons across the membrane, giving a proton gradient, which is used to drive the enzyme ATP synthase, which generates ATP by oxidative

phosphorylation. In all, about 12 ATP molecules are formed per glucose.

Tissues which are net suppliers of carbohydrate to the plant are known assources; those which are net consumers are sinks. Young leaves are sinks, but become sources when mature. Storage organs are major sinks in a mature plant.

Phloem transport is driven by a pressure gradient. Active loading of assimilates at the source creates a high solute concentration in the phloem, which results in water influx, creating a high hydrostatic pressure. Assimilate unloading at the sink tissue is accompanied by efflux of water, creating a low hydrostatic pressure. Loading is an active process. Assimilates unload down a concentration gradient maintained by the constant metabolism and incorporation of assimilates into storage reserves at the sinks.

The chief carbohydrate storage products from photosynthesis are sugars and starch. These are respired by plant cells to provide ATP. Respirationoccurs in all cells, whether photosynthetic or not. Starch is made up of glucose polymers, either as long, straight chain molecules, amylose, or in highly branched form, amylopectin. Starch is mostly deposited in plastids. Fig. 1 shows the two major pathways for starch breakdown, either involving hydrolytic enzymes, a-amylase, dextrinase, a-glucosidase or phosphorolytic enzymes, starch phosphorylase. Starch breakdown occurs initially in the plastid. The products are exported to the cytoplasm by a glucose transporter and a triose-P transporter in the chloroplast envelope. 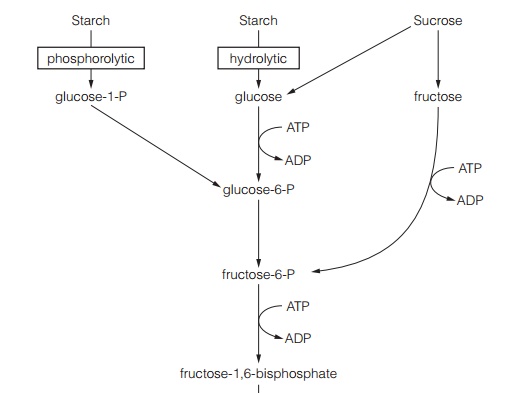 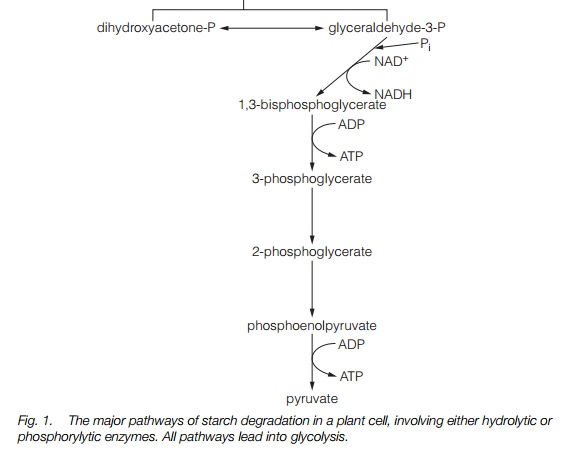 Glycolysis occurs in the cytoplasm without the consumption of oxygen. The products of starch breakdown, or sucrose, must be converted to a 6-carbon sugar phosphorylated at both ends for glycolysis. This 6-carbon sugar is fructose 1,6-bisphosphate; it is produced by the enzyme aldolasewhich adds a phosphate group taken from ATP to fructose-6-P (Fig. 1). Production of fructose 1,6-bisphosphate consumes two molecules of ATP.

Fructose 1,6-bisphosphate is cleaved into two 3-carbon sugars, each having one phosphate: dihydroxyacetone-P and glyceraldehyde-3-P. They are readily interconvertible and glyceraldehyde-3-P is then phosphorylated again to generate 1,3-bisphosphoglycerate, a 3-carbon sugar with phosphate at both ends. This step generates NADH and requires inorganic phosphate. The 1,3- bisphosphoglycerate is then converted to pyruvate in stages which yield two molecules of ATP (four per initial glucose as each 6-carbon glucose has generated two 3-carbon sugars). The net ATP yield from glycolysis is therefore two molecules (four produced, two consumed) per molecule of glucose.

In the presence of oxygen, pyruvate is respired in the citric acid cycle (see below) in the mitochondrion. In anaerobic conditions (for instance in a root in flooded soil) it is fermented to yield carbon dioxide and ethanol. NADH is oxidized to NAD+, recycling the NADH produced in glycolysis. The total yield of anaerobic respiration is therefore limited to two ATP molecules per molecule of glucose (Table 1). 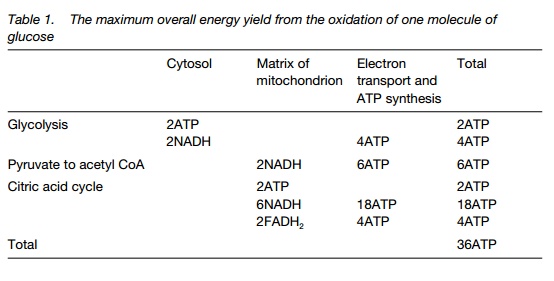 The next stage of respiration, the citric acid cycle (sometimes known as the Krebs cycle) requires oxygen and occurs in the mitochondrion (Fig. 2). Its substrate is the pyruvate generated by glycolysis. Pyruvate is combined with coenzyme A (CoA) to generate acetyl CoA and liberate CO2. The 2C compound is combined with 4C oxaloacetate to generate 6C citrate. CoA is released for reuse. Citrate is converted back to oxaloacetate in seven stages, with the production of one ATP, three NADH and one flavin adenine dinucleotide (reduced form; FADH2). The cycle also liberates two CO2; the pyruvate is therefore completely oxidized to yield three molecules of CO2 and all the energy of the C-C bonds liberated. 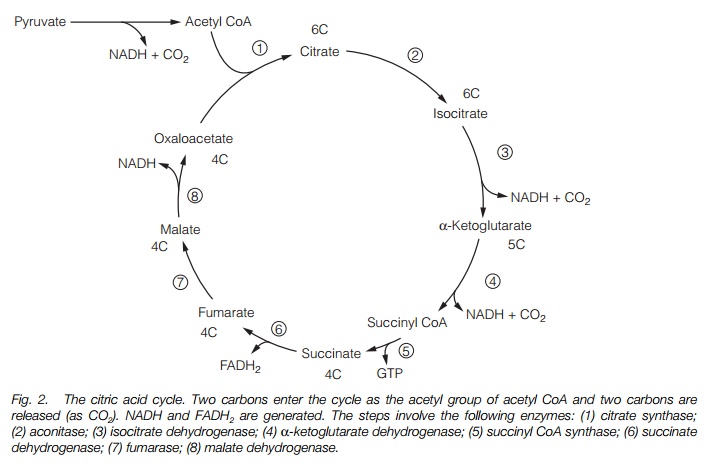 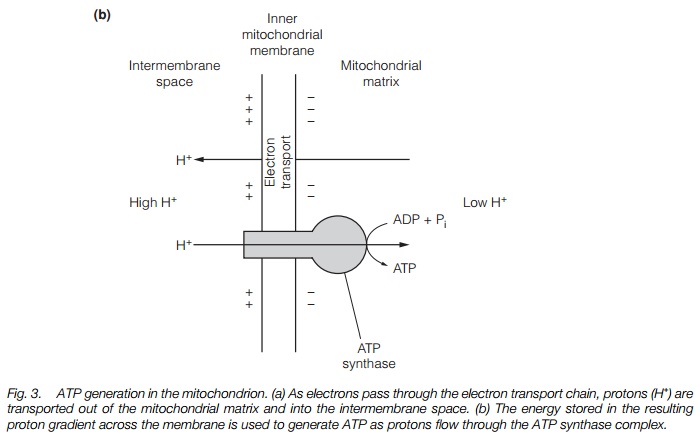 Carbohydrate is exported from the photosynthetic tissue of the plant via the phloem. Net exporters are source tissues. Tissues which are net consumers or accumulating stores are sink tissues. Plants use a variety of storage products, including starch, protein and oils (lipids). All these storage products are produced in pathways originating from intermediates in glycolysis and the citric acid cycle. Major sink tissues include storage organs such as tubers, seeds and fruits. Newly growing tissues, including young leaves, are also sink tissues; a leaf will develop from being a sink to a source as the balance between energy requirements for growth and export from photosynthesis changes.

Sugars move rapidly (0.05–0.25mh–1) in the phloem. Movement may be bi-directional in the same group of tubes. The best model to describe phloem transport is the pressure-flow model. It is proposed that the driving force for transport in the phloem results from an osmotic gradient between the source and the sink ends of the tube. Fig. 4 shows the predicted development of the turgor gradient that drives transport. The presence of sieve plates and the associated P-protein that seals the sieve plate if the tube is damaged helps to maintain the pressure gradient.

The key processes in phloem transport are loading and unloading, which create the pressure gradient. Sugars are concentrated in the phloem by active transport; a proton-pumping ATPase establishes a proton gradient and sucrose is carried into the companion cells/phloem by a sucrose/proton cotransporter . Phloem unloading also requires metabolic energy; sucrose may leave the phloem passively and be converted to glucose and fructose by the enzyme acid invertase, in which case glucose and fructose will be transported into the sink; alternatively, sucrose may leave the phloem, either viaplasmodesmata or via a sucrose transporter. If the sugars are rapidly metabolized within the sink (e.g. to form starch), a concentration gradient favoring sink loading will be maintained. 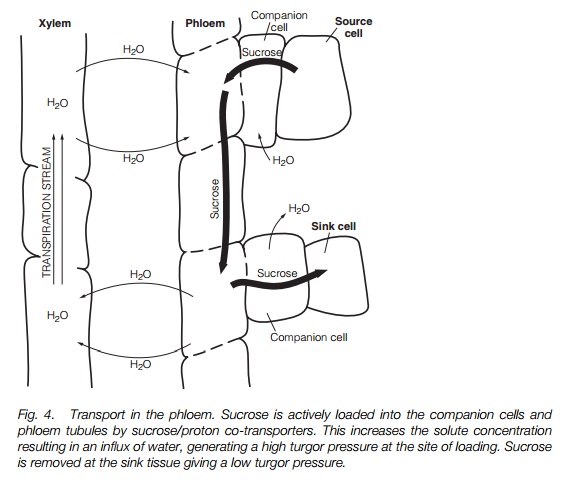