The bulk properties of a polymer are those most often of end-use interest. These are the properties that dictate how the polymer actually behaves on a macroscopic scale.

The bulk properties of a polymer are those most often of end-use interest. These are the properties that dictate how the polymer actually behaves on a macroscopic scale.

Young's Modulus quantifies the elasticity of the polymer. It is defined, for small strains, as the ratio of rate of change of stress to strain. Like tensile strength, this is highly relevant in polymer applications involving the physical properties of polymers, such as rubber bands. The modulus is strongly dependent on temperature.

Transport properties such as diffusivity relate to how rapidly molecules move through the polymer matrix. These are very important in many applications of polymers for films and membranes.

The term melting point, when applied to polymers, suggests not a solid-liquid phase transition but a transition from a crystalline or semi-crystalline phase to a solid amorphous phase. Though abbreviated as simply Tm, the property in question is more

A parameter of particular interest in synthetic polymer manufacturing is the glass transition temperature (Tg), which describes the temperature at which amorphous

polymers undergo a transition from a rubbery, viscous amorphous solid, to a brittle, glassy amorphous solid. The glass transition temperature may be engineered by altering the degree of branching or crosslinking in the polymer or by the addition of plasticizer.

In general, polymeric mixtures are far less miscible than mixtures of small molecule materials. This effect results from the fact that the driving force for mixing is usually entropy, not interaction energy. In other words, miscible materials usually form a solution not because their interaction with each other is more favorable than their self-interaction, but because of an increase in entropy and hence free energy associated with increasing the amount of volume available to each component. This increase in entropy scales with the number of particles (or moles) being mixed. Since polymeric molecules are much larger and hence generally have much higher specific volumes than small molecules, the number of molecules involved in a polymeric mixture is far smaller than the number in a small molecule mixture of equal volume. The energetics of mixing, on the other hand, is comparable on a per volume basis for polymeric and small molecule mixtures. This tends to increase the free energy of mixing for polymer solutions and thus make solvation less favorable. Thus, concentrated solutions of polymers are far rarer than those of small molecules.

In dilute solution, the properties of the polymer are characterized by the interaction between the solvent and the polymer. In a good solvent, the polymer appears swollen and occupies a large volume. In this scenario, intermolecular forces between the solvent and monomer subunits dominate over intramolecular interactions. In a bad solvent or poor solvent, intramolecular forces dominate and the chain contracts. In the theta solvent, or the state of the polymer solution where the value of the second virial coefficient becomes 0, the intermolecular polymer-solvent repulsion balances exactly the intramolecular monomer-monomer attraction. Under the theta condition (also called the Flory condition), the polymer behaves like an ideal random coil. The transition between the states is known as a coil-globule transition.

Plasticizers are generally small molecules that are chemically similar to the polymer and create gaps between polymer chains for greater mobility and reduced interchain interactions. A good example of the action of plasticizers is related to polyvinylchlorides or PVCs. A uPVC, or unplasticized polyvinylchloride, is used for things such as pipes. A pipe has no plasticizers in it, because it needs to remain strong and heat-resistant. Plasticized PVC is used for clothing for a flexible quality. Plasticizers are also put in some types of cling film to make the polymer more flexible.

The attractive forces between polymer chains play a large part in determining a polymer's properties. Because polymer chains are so long, these interchain forces are amplified far beyond the attractions between conventional molecules. Different side groups on the polymer can lend the polymer to ionic bonding or hydrogen bonding between its own chains. These stronger forces typically result in higher tensile strength and higher crystalline melting points.

The intermolecular forces in polymers can be affected by dipoles in the monomer units. Polymers containing amide or carbonyl groups can form hydrogen bonds between adjacent chains; the partially positively charged hydrogen atoms in N-H groups of one chain are strongly attracted to the partially negatively charged oxygen atoms in C=O groups on another. These strong hydrogen bonds, for example, result in the high tensile strength and melting point of polymers containing urethane or urea linkages. Polyesters have dipole-dipole bonding between the oxygen atoms in C=O groups and the hydrogen atoms in H-C groups. Dipole bonding is not as strong as hydrogen bonding, so a polyester's melting point and strength are lower than Kevlar's (Twaron), but polyesters have greater flexibility.

Ethene, however, has no permanent dipole. The attractive forces between polyethylene chains arise from weak van der Waals forces. Molecules can be thought of as being surrounded by a cloud of negative electrons. As two polymer chains approach, their electron clouds repel one another. This has the effect of lowering the electron density on one side of a polymer chain, creating a slight positive dipole on this side. This charge is enough to attract the second polymer chain. Van der Waals forces are quite weak, however, so polyethylene can have a lower melting temperature compared to other polymers.

In both standardized conventions, the polymers' names are intended to reflect the monomer(s) from which they are synthesized rather than the precise nature of the repeating subunit. For example, the polymer synthesized from the simple alkene ethene is called polyethylene, retaining the -ene suffix even though the double bond is removed during the polymerization process:

The characterization of a polymer requires several parameters which need to be specified. This is because a polymer actually consists of a statistical distribution of chains of varying lengths, and each chain consists of monomer residues which affect its properties.

A variety of lab techniques are used to determine the properties of polymers. Techniques such as wide angle X-ray scattering, small angle X-ray scattering, and small angle neutron scattering are used to determine the crystalline structure of polymers. Gel permeation chromatography is used to determine the number average molecular weight, weight average molecular weight, and polydispersity. FTIR, Raman and NMR can be used to determine composition. Thermal properties such as the glass transition temperature and melting point can be determined by differential scanning calorimetry and dynamic mechanical analysis. Pyrolysis followed by analysis of the fragments is one more technique for determining the possible structure of the polymer. Thermogravimetry is a useful technique to evaluate the thermal stability of the polymer. Detailed analyses of TG curves also allow us to know a bit of the phase segregation in polymers. Rheological properties are also commonly used to help determine molecular architecture (molecular weight, molecular weight distribution and branching)as well as to understand how the polymer will process, through measurements of the polymer in the melt phase. Another polymer characterization technique is Automatic Continuous Online Monitoring of Polymerization Reactions (ACOMP) which provides real-time characterization of polymerization reactions. It can be used as an analytical method in R&D, as a tool for reaction optimization at the bench and pilot plant level and, eventually, for feedback control of full-scale reactors. ACOMP measures in a model-independent fashion the evolution of average molar mass and intrinsic viscosity, monomer conversion kinetics and, in the case of copolymers, also the average composition drift and distribution. It is applicable in the areas of free radical and controlled radical homo- and copolymerization, polyelectrolyte synthesis, heterogeneous phase reactions, including emulsion polymerization, adaptation to batch and continuous reactors, and modifications of polymers. 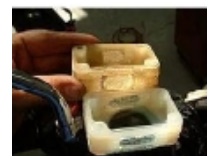 A plastic item with thirty years of exposure to heat and cold, brake fluid, and sunlight. Notice the discoloration, swollen dimensions, and tiny splits running through the material

Polymer degradation is a change in the properties—tensile strength, color, shape, or molecular weight—of a polymer or polymer-based product under the influence of one or more environmental factors, such as heat, light, chemicals and, in some cases, galvanic action. It is often due to the scission of polymer chain bonds via hydrolysis, leading to a decrease in the molecular mass of the polymer.

Although such changes are frequently undesirable, in some cases, such as biodegradation and recycling, they may be intended to prevent environmental pollution. Degradation can also be useful in biomedical settings. For example, a copolymer of polylactic acid and polyglycolic acid is employed in hydrolysable stitches that slowly degrade after they are applied to a wound.

High-temperature matrices S uch as bismaleimides (BMI), condensation polyimides (with an O-C-N bond), triazines (with a nitrogen (N) containing ring), and blends thereof are susceptible to polymer degradation in the form of galvanic corrosion when bare carbon fiber reinforced polymer CFRP is in contact with an active metal such as aluminum in salt water environments.

The degradation of polymers to form smaller molecules may proceed by random scission or specific scission. The degradation of polyethylene occurs by random scission —a random breakage of the bonds that hold the atoms of the polymer together. When heated above 450 °C, polyethylene degrades to form a mixture of hydrocarbons. Other polymers, such as poly(alpha-methylstyrene), undergo specific chain scission with breakage occurring only at the ends. They literally unzip or depolymerize back to the constituent monomer.

The sorting of polymer waste for recycling purposes may be facilitated by the use of the Resin identification codes developed by the Society of the Plastics Industry to identify the type of plastic. 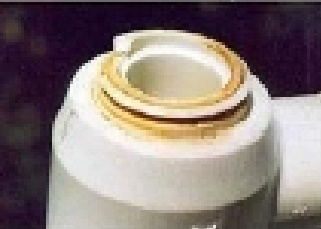 In a finished product, such a change is to be prevented or delayed. Failure of safety- critical polymer components can cause serious accidents, such as fire in the case of cracked and degraded polymer fuel lines. Chlorine-induced cracking of acetal resin plumbing joints and polybutylene pipes has caused many serious floods in domesticproperties, especially in the USA in the 1990s. Traces of chlorine in the water supply attacked vulnerable polymers in the plastic plumbing, a problem which occurs faster if any of the parts have been poorly extruded or injection molded. Attack of the acetal joint occurred because of faulty molding, leading to cracking along the threads of the fitting which is a serious stress concentration.

Polymer oxidation has caused accidents involving medical devices. One of the oldest known failure modes is ozone cracking caused by chain scission when ozone gas attacks susceptible elastomers, such as natural rubber and nitrile rubber. They possess double bonds in their repeat units which are cleaved during ozonolysis. Cracks in fuel lines can penetrate the bore of the tube and cause fuel leakage. If cracking occurs in the engine compartment, electric sparks can ignite the gasoline and can cause a serious fire.

Fuel lines can also be attacked by another form of degradation: hydrolysis. Nylon 6,6 is susceptible to acid hydrolysis, and in one accident, a fractured fuel line led to a spillage of diesel into the road. If diesel fuel leaks onto the road, accidents to following cars can be caused by the slippery nature of the deposit, which is like black ice