Atoms of the elements are held together in a ceramic structure by one of the following bonding mechanism: Ionic Bonding, Covalent Bonding, Mixed Bonding (Ionic-Covalent).

Most of ceramic materials have a mixed bonding structure with various ratios between Ionic and Covalent components. This ratio is dependent on the difference in the electronegativities of the elements and determines which of the bonding mechanisms is dominating ionic or covalent.

Electro negativity is an ability of atoms of the element to attract electrons of atoms of another element. Electronegativity is measured in a relative dimensionless unit (Pauling scale) varying in a range between 0.7 (francium) to 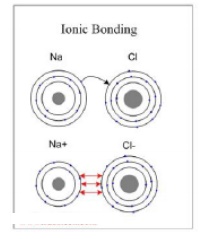 The typical example of a material with Ionic Bonding is sodium chloride (NaCl).

Covalent bonding occurs between two elements with low difference in their electronegativities (usually non-metallics), outer electrons of which are shared between the four neighboring atoms. Covalent Bonding is strongly directional. 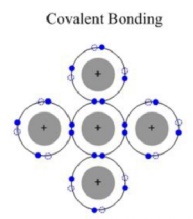 Ionic-covalent (mixed) bonding with various ratios of the two fractions (ionic and covalent) occurs in most of ceramic materials.

Degree of Ionic Bonding can be estimated from the following formula:

ΔE - difference in the electro negativities of the elements.

Strength of ionic and covalent bonds also determines high melting point, modulus of elasticity (rigidity), temperature and chemical stability of ceramic materials. Motion of dislocations through a ceramic structure is impeded therefore ceramics are generally brittle that limits their use as structural materials.

Ceramics may have either crystalline or amorphous structure. There are also ceramic materials, consisting of two constituents: crystalline and amorphous.

Balance of electrical charges of anions and cations

Radius Ratio determines Coordination Number (CN)- the maximum number of anion nearest neighbors for a cation.The anion neighbors do not touch each other.

Ceramic structures are classified and designated according to the pattern structures of several natural minerals: 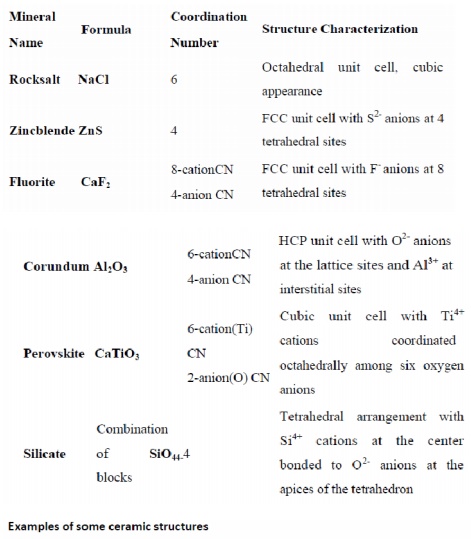 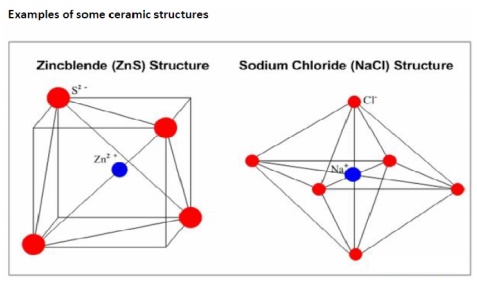 Quartz, cristobalite, and tridymite minerals are based on the framework silicate structure.

There are various classification systems of ceramic materials, which may be attributed to one of two principal categories: application base system or composition base system.

Application base classification of ceramic materials 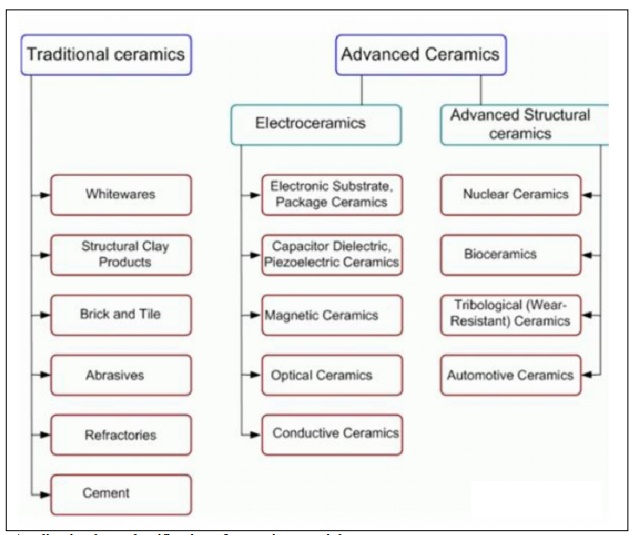 Characteristics of friction and wear of a ceramic material are determined by a combination of its bulk microstructure parameters, surface conditions and environmental factors (temperature, atmosphere pressure, etc.), lubrication conditions.

Effect of microstructure on tribological properties of ceramics