Methanol (methyl alcohol, wood alcohol) is widely used in the industrial production of synthetic organic compounds and as a constituent of many commercial solvents.

Methanol (methyl alcohol, wood alcohol) is widely used in the industrial production of synthetic organic compounds and as a constituent of many commercial solvents. In the home, methanol is most frequently found in the form of “canned heat” or in windshield-washing products. Poisonings occur from accidental ingestion of methanol-containing products or when it is misguid-edly ingested as an ethanol substitute.

Methanol can be absorbed through the skin or from the respi-ratory or gastrointestinal tract and is then distributed in body water. The primary mechanism of elimination of methanol in humans is by oxidation to formaldehyde, formic acid, and CO2 (Figure 23–3).Animal species show great variability in mean lethal doses of methanol. The special susceptibility of humans to methanol toxic-ity is due to metabolism to formate and formaldehyde, not to methanol itself. Since the conversion of methanol to its toxic metabolites is relatively slow, there is often a delay of 6–30 hours before the appearance of severe toxicity. 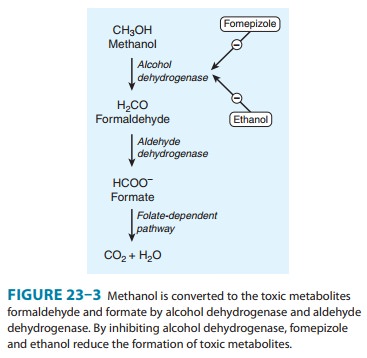 Physical findings in early methanol poisoning are generally nonspecific, such as inebriation and gastritis, and possibly an ele-vated osmolar gap . In severe cases, the odor of formaldehyde may be present on the breath or in the urine. After a delay, the most characteristic symptom in methanol poisoning— visual disturbance—occurs along with anion gap metabolic acido-sis. The visual disturbance is frequently described as “like being in a snowstorm” and can progress to blindness. Changes in the retina may sometimes be detected on examination, but these are usually late. The development of bradycardia, prolonged coma, seizures, and resistant acidosis all imply a poor prognosis. The cause of death in fatal cases is sudden cessation of respiration. A serum methanol concentration higher than 20 mg/dL warrants treatment, and a concentration higher than 50 mg/dL is considered serious enough to require hemodialysis. Serum formate levels are a better indica-tion of clinical pathology but are not widely available.

The enzyme chiefly responsible for methanol oxidation in the liver is alcohol dehydrogenase (Figure 23–3). Fomepizole, an alcohol dehydrogenase inhibitor, is approved for the treatment of methanol and ethylene glycol poisoning. It is administered intra-venously in a loading dose of 15 mg/kg followed by 10 mg/kg every 12 hours for 48 hours and then 15 mg/kg every 12 hours thereafter until the serum methanol level falls below 20–30 mg/dL. The dosage increase after 48 hours is based on evidence that fomepizole rapidly induces its own metabolism by the cytochrome P450 system. Patients undergoing hemodialysis are given fomepizole

for alcohol dehydrogenase; thus, saturation of the enzyme with ethanol reduces formate production. Ethanol is used intravenously as treatment for methanol and ethylene glycol poisoning. The dose-dependent characteristics of ethanol metabolism and the variability of ethanol metabolism require frequent monitoring of blood ethanol levels to ensure appropriate alcohol concentration.

In cases of severe poisoning, hemodialysis can be used to eliminate both methanol and formate from the blood. Two other measures are commonly taken. Because of profound metabolic acidosis in methanol poisoning, treatment with bicarbonate often is necessary. Since folate-dependent sys-tems are responsible for the oxidation of formic acid to CO2 in humans (Figure 23–3), folinic and folic acid are often adminis-tered to patients poisoned with methanol, although this has never been fully tested in clinical studies.