The CNS is markedly affected by acute alcohol consumption. Alcohol causes sedation, relief of anxiety and, at higher concentra-tions, slurred speech, ataxia, impaired judgment, and disinhibited behavior, a condition usually called intoxication or drunkenness (Table 23–1). These CNS effects are most marked as the blood level is rising, because acute tolerance to the effects of alcohol occurs after a few hours of drinking. For chronic drinkers who are tolerant to the effects of alcohol, higher concentrations are needed to elicit these CNS effects. For example, an individual with chronic alcoholism may appear sober or only slightly intoxicated with a blood alcohol concentration of 300–400 mg/dL, whereas this level is associated with marked intoxication or even coma in a nontoler-ant individual. The propensity of moderate doses of alcohol to inhibit the attention and information-processing skills as well as the motor skills required for operation of motor vehicles has pro-found effects. Approximately 30–40% of all traffic accidents resulting in a fatality in the United States involve at least one person with blood alcohol near or above the legal level of intoxication, and drunken driving is a leading cause of death in young adults. 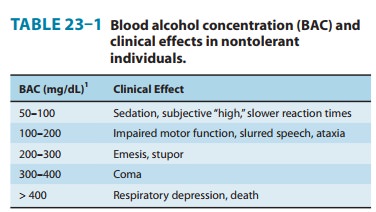 Like other sedative-hypnotic drugs, alcohol is a CNS depres-sant. At high blood concentrations, it induces coma, respiratory depression, and death.

Ethanol affects a large number of membrane proteins that participate in signaling pathways, including neurotransmitter receptors for amines, amino acids, opioids, and neuropeptides; enzymes such as Na+/K+-ATPase, adenylyl cyclase, phosphoinositide-specific phospholipase C; a nucleoside transporter; and ion channels. Much attention has focused on alcohol’s effects on neurotransmis-sion by glutamate and γ-aminobutyric acid (GABA), the main excitatory and inhibitory neurotransmitters in the CNS. Acute ethanol exposure enhances the action of GABA at GABAA recep-tors, which is consistent with the ability of GABA-mimetics to intensify many of the acute effects of alcohol and of GABAA antagonists to attenuate some of the actions of ethanol. Ethanol inhibits the ability of glutamate to open the cation channel associ-ated with the N-methyl-D-aspartate (NMDA) subtype of gluta-mate receptors. The NMDA receptor is implicated in many aspects of cognitive function, including learning and memory. “Blackouts”—periods of memory loss that occur with high levels of alcohol—may result from inhibition of NMDA receptor activa-tion. Experiments that use modern genetic approaches eventually will yield a more precise definition of ethanol’s direct and indirect targets. In recent years, experiments with mutant strains of mice, worms, and flies have reinforced the importance of previously identified targets and helped identify new candidates, including a calcium-regulated and voltage-gated potassium channel that may be one of ethanol’s direct targets (see Box: What Can Drunken Worms, Flies, and Mice Tell Us about Alcohol?).

Significant depression of myocardial contractility has been observed in individuals who acutely consume moderate amounts of alcohol, ie, at a blood concentration above 100 mg/dL.

Ethanol is a vasodilator, probably as a result of both CNS effects (depression of the vasomotor center) and direct smooth muscle relaxation caused by its metabolite, acetaldehyde. In cases of severe overdose, hypothermia—caused by vasodilation—may be marked in cold environments. Ethanol also relaxes the uterus and—before the introduction of more effective and safer uterine relaxants (eg, calcium channel antagonists)—was used intravenously for the suppression of premature labor.