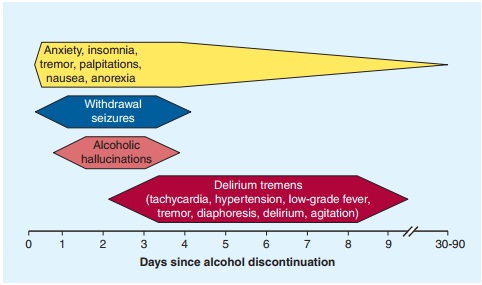 Abrupt alcohol discontinuation in an individual with alcohol dependence leads to a characteristic syndrome of motor agitation, anxiety, insomnia, and reduction of seizure threshold.

Abrupt alcohol discontinuation in an individual with alcohol dependence leads to a characteristic syndrome of motor agitation, anxiety, insomnia, and reduction of seizure threshold. The severity of the syndrome is usually proportionate to the degree and dura-tion of alcohol abuse. However, this can be greatly modified by the use of other sedatives as well as by associated factors (eg, diabetes, injury).

In its mildest form, the alcohol withdrawal syndrome of increased pulse and blood pressure, tremor, anxiety, and insomnia occurs 6–8 hours after alcohol consumption is stopped (Figure 23–2). These effects usually lessen in 1–2 days, although some such as anxiety and sleep disturbances can be seen at decreasing levels for several months. In some patients, more severe acute reactions occur, with patients at risk of withdrawal seizures or alcoholic hal-lucinations during the first 1–5 days of withdrawal. Alcohol with-drawal is one of the most common causes of seizures in adults. Several days later, individuals can develop the syndrome of delirium tremens, which is characterized by delirium, agitation, autonomic nervous system instability, low-grade fever, and diaphoresis.The major objective of drug therapy in the alcohol withdrawal period is prevention of seizures, delirium, and arrhythmias. Potassium, magnesium, and phosphate balance should be restored as rapidly as is consistent with renal function. Thiamine therapy is initiated in all cases. Individuals in mild alcohol withdrawal do not need any other pharmacologic assistance.Specific drug treatment for detoxification in more severe cases involves two basic principles: substituting a long-acting sedative-hypnotic drug for alcohol and then gradually reducing (“taper-ing”) the dose of the long-acting drug. Because of their wide margin of safety, benzodiazepines are preferred. The choice of a specific agent in this class is generally based on pharmacokinetic or economic considerations. Long-acting benzodiazepines, includ-ing chlordiazepoxide and diazepam, have the advantage of requir-ing less frequent dosing. Since their pharmacologically active metabolites are eliminated slowly, the long-acting drugs provide a built-in tapering effect. A disadvantage of the long-acting drugs is that they and their active metabolites may accumulate, especially in patients with compromised liver function. Short-acting drugs such as lorazepam and oxazepam are rapidly converted to inactive water-soluble metabolites that will not accumulate, and for thisreason the short-acting drugs are especially useful in alcoholic patients with liver disease. Benzodiazepines can be administered orally in mild or moderate cases, or parenterally for patients with more severe withdrawal reactions.After the alcohol withdrawal syndrome has been treated acutely, sedative-hypnotic medications must be tapered slowly over several weeks. Complete detoxification is not achieved with just a few days of alcohol abstinence. Several months may be required for restoration of normal nervous system function, espe-cially sleep.